The right whale, one of the world’s largest and most-endangered marine mammals, is in a slow, precarious recovery. Population estimates hover around 500, a modest gain from the early 1990s, when the species numbered fewer than 300.

For reasons not fully understood, North Atlantic right whale migration patterns seem to be changing, with fewer being observed in the Gulf of Maine. The right whales migrate from waters off Florida, where they winter, to the waters off Maine and Maritime Canada where they feed in summer, but they may be bypassing the Gulf of Maine in favor of prey found in cooler waters.

“There’s been a shift in marine species, in general, along the coast as ocean waters warm,” said spokeswoman Shelley Dawicki at NOAA’s Northeast Fisheries Science Center.

“Some species are going into deeper areas of the Gulf, others are shifting more to the north where water temperatures are preferred. The waters have been warming in the Gulf for some time now, and we’ve seen some of the warmest temperatures on record in recent years.”

Climate scientists have noted that the Gulf of Maine is warming faster than 95 percent of the world’s oceans.

“Right whales may also be moving farther offshore, farther north, into deeper waters, where they can find food,” Dawicki continued. “We really don’t know where they go, but they generally head north into cooler Canadian waters in the summer.”

Right whales are classified as “baleen” whales, relying on plates inside their mouths with 200-300 bristle-like projections on each side of the jaw that strain food as seawater is inhaled. The plates, made of keratin, can be up to 8 feet long.

Right whales can weigh up to 70 tons and grow up to 55 feet long. Their heads are enormous, contributing to approximately one-fourth of their overall body length.

The tough white patches of skin on their head, known as “callosities,” show up well in photographs and assist researchers in identifying the species. Other identifying characteristics include a black, stocky body, a V-shaped spout, the absence of a dorsal fin, and the large tail they raise as they dive.

Twice this year the Center for Coastal Studies identified 200 individual right whales in Cape Cod Bay. Sei whales and a rare bowhead whale, usually found in the Arctic, also were observed, Dawicki said. An aerial survey team recently captured an image with a sei whale, bowhead and right whale all in the same image, also a rare occurrence.

One-hundred and ten right whales were observed in a helicopter survey along the ocean shore of Cape Cod in April. Among them were four calves, although one calf later was killed, apparently after being stuck by a boat propeller.

The right whale sightings this spring, some close to shore, likely are the result of an abundant supply of zooplankton there. Dawicki said the whales follow their prey, which also are impacted by temperature change.

“High-risk Cape Cod Bay is closed from February from April when whales are migrating to that area,” said Swails. “However, encounters still occur in other areas and are a problem.”

Despite the regulations, Swails said fishing-related entanglements have increased, which may be linked to changes in fishing practices and where fishing is taking place.

According to a study reported on in the April 2016 edition of Frontiers in Marine Science, fishing entanglements are not only responsible for the deaths of some adult right whales, but may also negatively impact reproduction in the species. The author of the study, Scott Kraus, a scientist with the New England Aquarium in Boston, concluded that fishing entanglements appear to have long-term negative physical effects and may decrease the whales’ ability to later reproduce.

Swails said that five calves were born this year in the North Atlantic, down from 20 in recent years.

Right whales were nearly hunted into extinction because their thick blubber yielded large amounts of oil. Their baleen was used for corsets, buggy whips, backscratchers, and parasol ribs. The whales were easy to locate after being killed because the blubber made them float on the water’s surface. 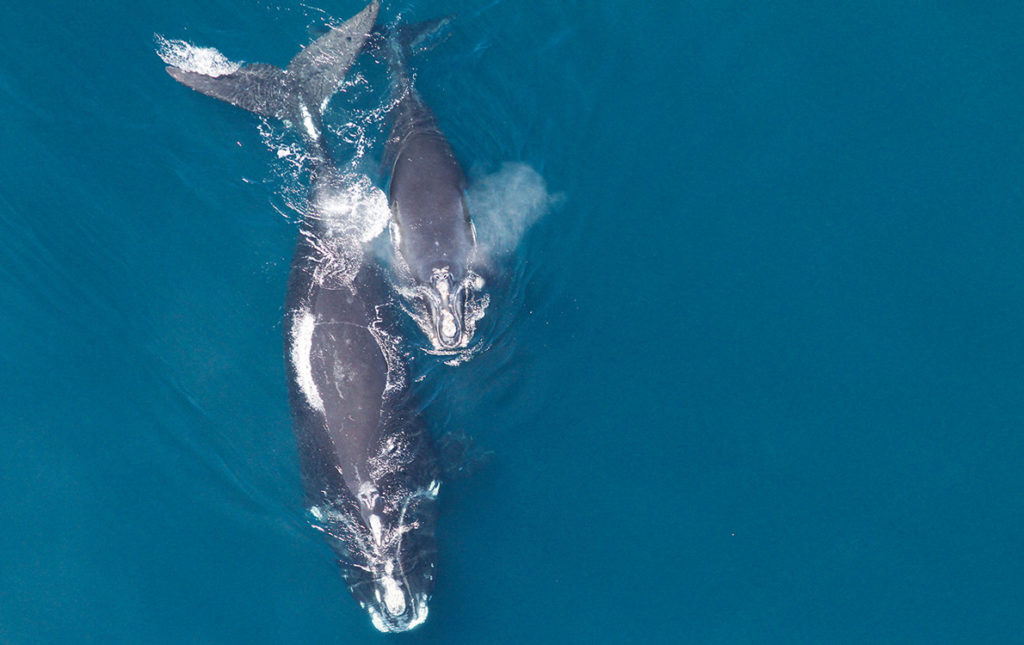 A right whale mother and calf