I was disheartened by the article on the plight of North Atlantic right whales on the front page of April’s The Working Waterfront. The story and accompanying photo misleads the public about interactions between the Maine lobster fishery and right whales and runs counter to the Island Institute’s mission to sustain Maine’s island and coastal communities.

The Maine Lobstermen’s Association (MLA) is deeply involved in addressing the many complex issues that go into protecting endangered right whales. The MLA has served on the Atlantic Large Whale Take Reduction Team (TRT), the body charged with providing management advice to the federal government to protect this species, since its inception in 1995. Since then, MLA and its members have led the way to implement a suite of protective fishing practices that NOAA Fisheries confirms have reduced risk to whales in U.S. waters.

Indeed, the whale seminar at the Maine Fishermen’s Forum on which the article was based was an MLA-sponsored initiative intended to expand public knowledge of the status of right whales and to further dialogue about future protective measures.

Most readers would conclude they are looking at an example of local lobster gear wrapped around a right whale in U.S. waters. This is simply not true. The photo is Canadian from a fishery operated without the kind of protective measures that have been in place in Maine for years.

Minimizing right whale entanglements in fishing gear is a complex undertaking that requires close study of where and how the animals become entangled and what kinds of gear pose entanglement risks. Right whales frequent the length of the Atlantic seaboard from Florida to Greenland, encountering a broad array of fisheries and gear types. In many cases, the type of fishing gear and its origin cannot be determined. However, since 1997, there have been only a handful of confirmed entanglements in Maine lobster gear, none of which have been lethal.

As for the 17 right whale mortalities in 2017, which the article suggests are “alarming Maine lobstermen,” 12 occurred in Canadian waters. The entangled animals were caught up in Canadian snow crab gear, not Maine lobster gear. None of the U.S. mortalities were linked to fishing.

The news media can be adept at demonizing fishermen as the simplistic cause of all ills facing right whales. We at MLA expect better-informed, more responsible treatment from the Island Institute. A sensational front-page display of this type detracts from telling the more complex story that underlies MLA’s concern for right whales.

The task on which MLA is focused is furthering understanding of the full range of risks to the right whale population and crafting an effective set of protective measures that will safeguard the animals across their full geographic range. As illustrated by the 2017 whale deaths, a comprehensive evaluation of new risks to the population is needed because whale distributions have shifted as they search for food in new areas beyond their historic feeding grounds.

I am disappointed the Island Institute did not handle this complex and sensitive topic in a more responsible and informative manner. The dissemination of misleading information about such an important issue does a disservice to the Maine lobster fishery and our coastal and island communities.

Patrice McCarron is executive director of the Maine Lobstermen’s Association. 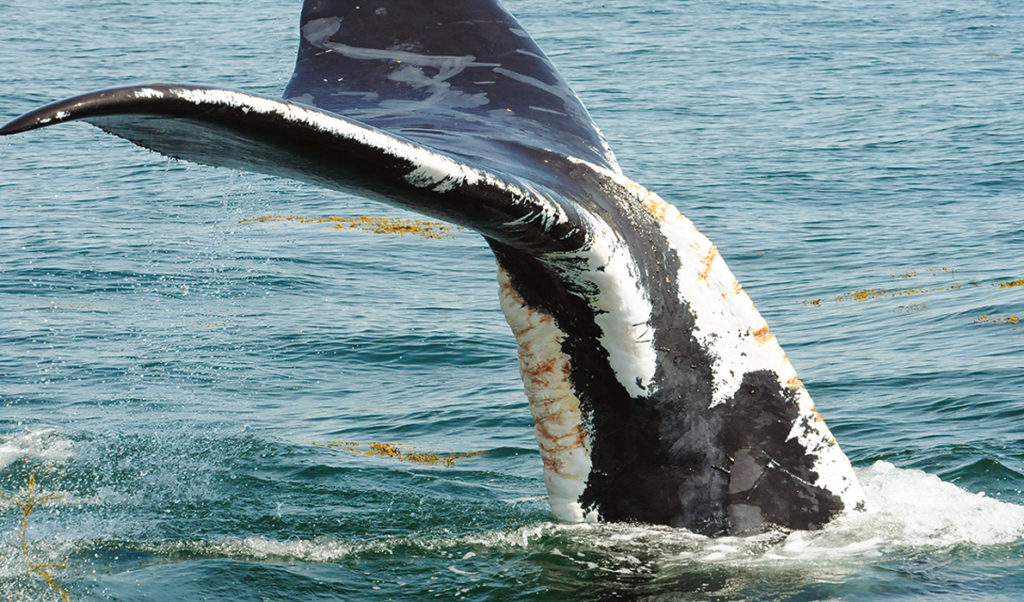 A right whale that has recovered from wounds linked to fishing gear.