Marine Patrol Officer Benjamin Burnes, 23, who graduated from the Maine Criminal Justice Academy in May, has already put his training to good use, saving the life of a man whose canoe capsized while fishing recently on the York River.

At about 4 p.m. on Thursday, July 16, Burnes and Sgt. Tom Hale had both come ashore from routine patrol near the York River. They were crossing the Route 103 bridge, heading toward Route 1. Burnes looked out the vehicle window and saw a capsized canoe floating in the swift ebb tide current.

“I happened to look downriver at the right moment,” said Burnes.

He then saw a man floating in the current.

“He was clinging to a cooler floating downstream of the bridge,” Burnes said.

The man, Paul Carr of Massachusetts, had been fishing for striped bass with a friend when their canoe over turned. Carr managed to swim to shore while Burnes boarded a skiff operated by a local lobsterman and retrieved the canoe.

As Hale and Burnes helped the man to shore they heard another man yelling for help from under the bridge.

“We weren’t there for more than a couple of minutes when I heard someone yell ‘Help, help, help!’ up by the bridge,” Burnes said.

The second man, Gerard Centrella, also of Massachusetts, had been clinging to the bridge piling but was attempting to swim ashore despite the five knot current.

“I tried to swim for the shore but I couldn’t make it,” Centrella said later. “I was so close to the edge. I couldn’t feel my arms or legs. I was yelling for help but I couldn’t see anyone.”

Although weighed down by his gun belt, boots and ballistic vest, Burnes ran to the bank and moved toward the struggling man without hesitation.

“I knew he didn’t have much time in that current so I didn’t really think about it and jumped in.”

The water survival training he had received months earlier gave him the confidence to react swiftly. As he swam toward the man, Burnes realized Centrella was struggling for his life.

“He was saying, ‘I can’t get out of the current.’ He kept asking me to help him,” Burnes said.

“I reached out my hand to him and told him to keep his head above water,” said Burnes. “I grabbed his hand and swam on my back toward shore. He keeled over when he got to shore. He was exhausted from fighting that current.”

Once on shore, Centrella expressed gratitude to the young marine patrol officer.

“I said, ‘You saved my life.’ I told him, ‘I’m never going to forget your face. I’ll forever be grateful.’”

Both victims were checked by local EMS personnel and were not taken to a hospital.

“Officer Burnes showed extraordinary instinct and skill in performing this daring rescue,” said Hale. “We teach the skills to handle yourself in the water, but the instinct to act without hesitation came naturally to this young officer and will serve him well throughout his career.”

Three weeks into his new job and Burnes is pleased he chose to become a marine patrol officer.

“I think it’s great. I couldn’t imagine having a career that started out like this. Being able to help people is very rewarding. If this is what the first three weeks is like, I look forward to the next 25 years.” 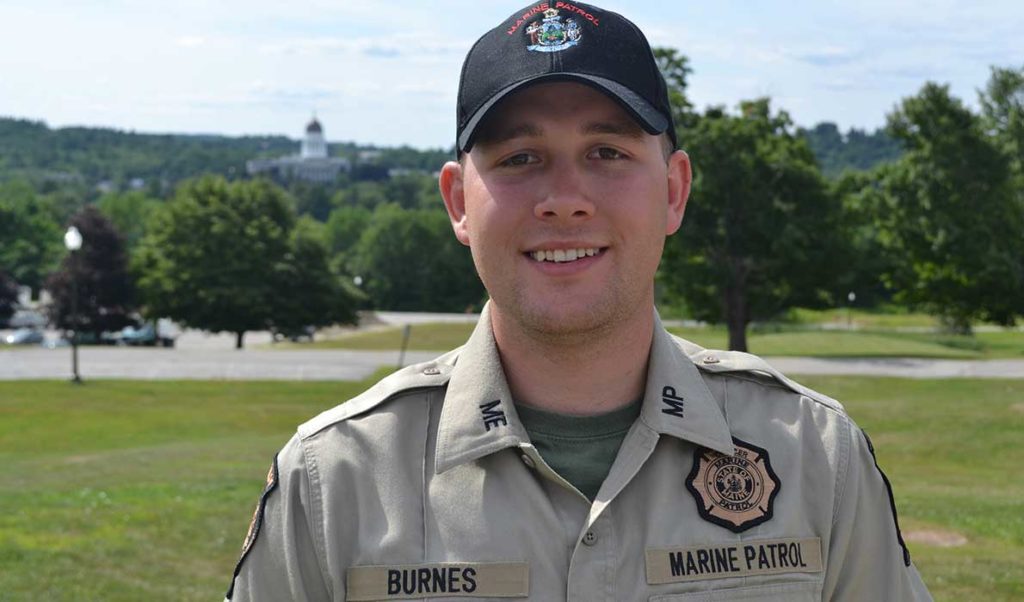