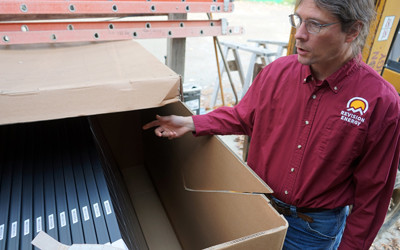 You might be tempted to see the success of ReVision Energy as the case of a business stepping up to land an obvious windfall. After all, renewable energy equipment is a hot ticket these days.

The company, which began in 2003 out of Belfast’s Green Store, has grown to include an operation in Liberty in western Waldo County, as well as locations in Portland; Brentwood and Concord, N.H.; and North Andover, Mass. In all, it employs 250-plus.

But John Luft, who manages the Liberty shop, says ReVision has navigated a high-risk, volatile world in which technology has rapidly evolved.

Ten years ago, 80 percent of the business was tied to installing solar-driven hot water systems, and now it’s heavy on photovoltaics (PV). Solar energy costs—mostly the hardware—have dropped by 74 percent in the last ten years, which makes that form of energy popular.

But yes, the business has been very successful. Not bad for an operation launched by “two hippies with a pickup,” Luft jokes. That pair was Bill Behrens, then a partner in the Green Store, and Patrick Coon. The business began as Energyworks.

“Every two days, it’s a new job,” Luft says, rattling off a list of some of the larger commercial PV jobs around the state, many of which are municipal contracts. Revenue from smaller, residential jobs and those larger commercial installations is split about 50/50, he said.

An emerging line is retrofitting lighting for commercial buildings with long-lasting, low-energy use LEDs.

“That’s one of our newer divisions,” Luft said.

Talk to Luft about ReVision as a business, and the conversation is peppered with some non-business terms. As of October, ReVision is 100 percent employee-owned under ESOP, or “employee stock ownership plan.” And it’s a “B Corp,” denoting a business legally required to consider benefits to workers, suppliers, community, consumers, and the environment.

“We’re a mission-based business,” he says. “Our mission is to get New England off fossil fuel. We want to make the planet a better place.”

The phrase “impact on the planet” also comes up as Luft describes the business. So do observations about public policy on energy matters.

There is a federal tax credit for those installing PVs, but no state incentive funding. Luft asserts that tax credits for renewable hardware installations are not a subsidy, but an investment, just as road and highway construction is an investment.

“Maine—and the islands—can actually produce their own electricity,” he asserts. With $5 billion leaving the state annually through purchases of fossil fuel, homegrown power has economic consequences, Luft says. “It’s going to be a job creator.”

Germany leads Europe in renewable energy, and on a day two years ago, the entire country’s electricity supply came from renewables. “They proved it,” he said. And Maine gets more annual sunshine than Germany.

The Liberty operation, which employs 48, looks like an electric or plumbing supply house, with all kinds of gear stacked on shelves.

But there is more than climbing on roofs and connecting wires. The Liberty crew includes a sales staff, and there is scheduling of installations and permitting to be coordinated, making for a busy and varied operation.

“We have a work ethic that came out of Waldo County,” Luft says proudly, himself a Connecticut transplant who came to the area to attend Unity College. He built his own off-grid house in Brooks, which is how he met company co-founder Bill Behrens.

What’s next is growing the work force.

“We have to have licensed electricians,” he said, and for some younger folks joining the company, working as apprentices can lead to that license. Nearby Kennebec Valley Community College is now offering solar installation training.

Gone is the DIY ethic that launched the industry.

“We have to get this right,” Luft said. “We’re ambassadors of this change that’s coming. We’re fanatical about the details.”

Affordability remains an obstacle for PVs, but he argues that investing $10,000 to $20,000 is like locking-in at $2 per gallon for home heating oil for ten years.

“Our goal is to get to the kitchen table” with a customer, listen carefully, “then pair them with our products. We’re not going to change this world by making this available to only those who can afford PVs,” he said.

To keep prices down, ReVision uses a buying coop for hardware, offers a deal to commercial customers by which ReVision owns the equipment and the customer pays the company for the electricity, and it arranges bank financing for residential customers.

Banks are able to offer residential financing, Luft said, because for each year the customer is making the loan payment, household energy costs drop.

“This is a very secure bet for the banks,” he said,

When the cost of batteries begins to drop, homeowners can create their own power plants. And when those battery banks are linked, the electricity paradigm will change radically.

“That’s the missing link,” he said, and cautiously predicts a massive change in how energy is made and used over the next five to ten years.

The bottom line, Luft says, is that the currency for the emerging energy world is electrons. Producing and using those electrons close to home will move the planet away from reliance on an environmental and financial costly fuel.