Wherever there’s an abundance of Atlantic menhaden along the East Coast, there, too, is an abundance of other wildlife—humpback whales and bottlenose dolphins, striped bass and bluefish, and bald eagles and osprey.

That’s because menhaden, commonly called “pogies” by fishermen, are a key forage species.

“When we saw the pogies coming in, there were whales and tuna right up along the shore,” said Steve Weiner, a tuna fisherman in Ogunquit, recalling the arrival of menhaden in Maine coastal waters in 2016, after a long absence. “It’s healthy. It’s alive. It brings the bigger predators and the birds,” he said.

Begin fished for lobsters many years, then ran a bait shop. When pogies are around, he rigs a purse seine and goes pogy fishing.

But the fish disappeared from his area many years ago. As of 2016, they started coming back. Begin is familiar with the fish’s cycle in the Gulf of Maine: They tend to come around for years at a time, then disappear for years at a time. He figured this was the beginning of the upswing.

So a year ago, he and another fisherman built a boat they named Pogy Patrol. In 2017, they fished through the summer and into September, finding pogies in abundance right up to the shore. The abundance, he said, is great for small-boat fishermen like himself, who can use the additional revenue stream. Selling his catch for lobster bait, it’s great for lobster fishermen, too.

By all appearances, menhaden are back in Maine waters, and fishermen are eager to leverage a resurgent fishery.

“It’s unbelievably important,” said Begin. “It creates a lot of jobs, and it helps the lobstermen, too.”

“More pogies are good for Maine fishermen catching them, for lobstermen using them for bait, and for recreational fishermen for their game fish,” agreed Steve Train, a lobsterman on Long Island, in Casco Bay. “I think I saw more menhaden this year in Casco Bay than I’ve seen since late ‘80s or the early ‘90s.”

“All the old people used to say it was a cycle,” said Alex Todd, who primarily fishes for lobster and scallops from Chebeague Island, but began targeting menhaden in 2017 when it became apparent the fish was showing up in number. “They would be here for a few years then be gone for a few years. That’s the way it seemed to be. And for certain years, for whatever reason, they come farther north.”

Menhaden can be found in estuaries and coastal waters along the East Coast, with older and larger menhaden typically traveling farther north in the summer, according to the Atlantic States Marine Fisheries Commission, which oversees the fishery. By winter, menhaden of all sizes and ages migrate south to spawn. Growing up to 15 inches, it travels in schools of hundreds or thousands, coming to the water’s surface on warm, sunny days, and often congregating close to shore. An oily fish, it’s a popular food for just about every predator.

The fish has supported one of the largest commercial fisheries since colonial times. The fishery consists of a “reduction” fishery and a bait fishery. The reduction fishery is so named because it reduces whole fish into meal, oil, and solubles, which go into products like poultry and livestock feeds. Reduction operations peaked in the 1950s, with over 20 factories. Stock fluctuations periodically impacted landings; today, only one plant remains, in Virginia. In the meantime, bait landings became increasingly important.

Due to concerns about the health of the stock, ASFMC in 2012 established a coastwide quota, for the first time, at 25 percent lower than 2011 landings. At the same time, ASMFC divided the quota into state allocations based on each state’s 2009-2011 landing history. Another 1 percent can be caught during “episodic events,” and fishermen can also harvest limited quantities as “incidental” bycatch.

The 2009-2011 baseline was a problem for states like Maine, on the fringes of menhaden’s range and with little landings history during that period. ASFMC subsequently investigated allocation issues, boosting the coastwide quota and giving Maine an allocation of 176,370 pounds in 2016 and 2017. That drew 30-40 harvesters, said Maine Department of Marine Resources Resource Coordinator Melissa Smith.

“Having local menhaden was a fantastic opportunity for a lot of these boats,” said Maine Coast Fishermen’s Association Executive Director Ben Martens. “It’s an opportunity for the lobster fleet and for small communities that don’t have diverse fishing opportunities. If we aren’t catching it locally, we’re buying menhaden from New Jersey.”

Weiner cautioned that it’s important to consider the resource as a whole.

“It appears that, as the resource gets healthier, it spreads farther and farther northeast,” he said. “If you’re a New England boat, you want to protect the core of the fishery” in waters to the south “so that it gets to you. We have not only a vested interest in getting allocations in New England, but also in not having too much caught coastwide.”

Weiner has seen at least a few cycles of pogies since the 1960s.

“I think the consensus in Maine is, they just come and go,” he said. “What I do know is that we have pogies here now. To the extent that man has any control of them staying here, we have to make sure they’re managed right.” 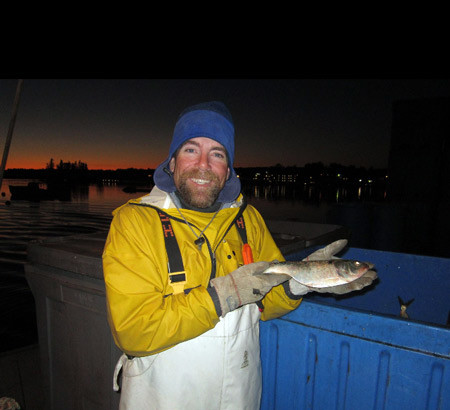 Robbie Begin with a pogy. 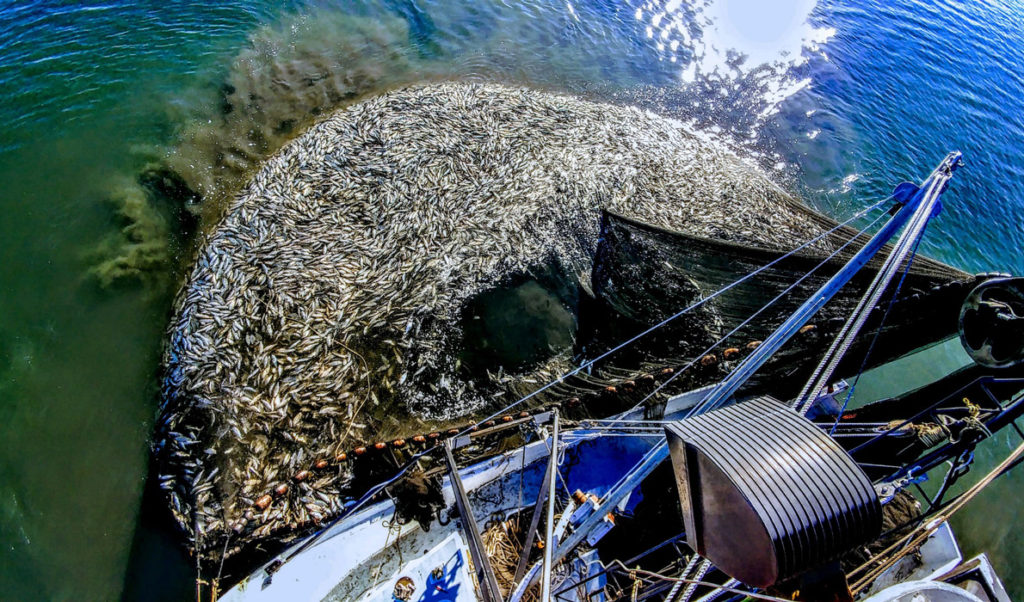 Robbie Begin and his crew bring a purse seine full of pogies up alongside his boat Pogie Patrol.