The iconic rocky coast of Maine. It has awed and wooed people for centuries. It has also helped fuel the state’s economy, as those it has beguiled flock here. And, it turns out, it helps protect us from the unfolding and increasing impacts of climate change, specifically, sea level rise.

Sea level rise. If you live along the coast or on the islands, you’ve certainly heard of it. Probably, you are already living with its impacts, even if it isn’t causing major disruption to your daily life.

If you aren’t living on the coast or islands, you certainly have heard about it, indirectly, in news reports in the guise of storm-related flooding. You may remember Winter Storm Grayson in January 2018, for example. The blizzard caused flooding all along Maine’s coastline.

Scarborough had to close a section of heavily traveled Route 1 along the Scarborough Marsh and the town’s iconic Clambake Seafood Restaurant’s parking lot was submerged as ocean water gushed into the building itself.

Lincolnville Beach, Port Clyde’s commercial fishing pier, and parts of Portland saw extensive flooding, too. Portland actually came within a hair’s breadth of reaching its highest storm tide on record—the infamous Blizzard of ’78, which had a storm tide of 14.1 feet. Instead, the city recorded its second highest storm tide at 13.25 feet.

A certain amount of flooding during severe storms is expected by anyone who lives near the ocean; however, as seas rise, even mild storms are causing significant damage and inconvenience.

As ocean and climate scientists will tell you, sea level rise isn’t a new phenomenon. The world’s oceans have been rising for centuries. So why all the concern today? Sea level rise is having a more profound and noticeable impact, resulting in incalculable costs to life, human and non-human, and property.

Sea level rise is mainly driven by two factors: warming oceans and melting land ice, such as the ice sheets of Greenland and the Antarctic, said Gayle Bowness, the science education program manager at the Gulf of Maine Research Institute in Portland.

As land ice melts, that water is added to the world’s oceans, and warming water expands, which means it takes up more space. The Gulf of Maine, she noted, is warming faster than 99 percent of the world’s oceans.

How much the seas will rise and how fast is unknown and depends on a variety of factors, including a warming atmosphere and how the world’s ice sheets respond to that. On the low end of scientific estimates is a global sea level rise of three feet by 2100. On the high end, if the ice sheets deteriorate rapidly, estimates are projected to be as high as 11 feet.

While scientists work to understand how much seas will rise and by when, what is clear is that communities along the ocean need to prepare now. 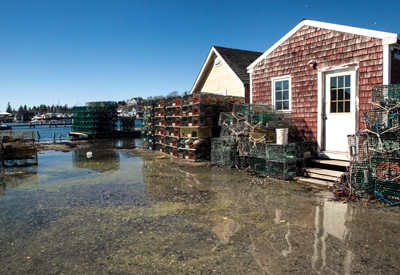 Some communities are in dire straits already: Miami, Florida, for example, where residents face frequent flooding (even when it’s not raining) due to high tides. And Charleston, South Carolina, which has been experiencing in recent years tidal flooding in parts of the city that normally don’t flood from high tides.

These are places where drastic measures need to be taken now, but Maine is not necessarily one of those places, says Erika Spanger-Siegfried, lead climate analyst of the climate and energy program of the Union of Concerned Scientists, a Massachusetts-based nonprofit science advocacy organization.

“Maine is endowed with coastal elevation and rocky shores,” she said. “That’s an important first line of defense when it comes to sea level rise.”

Whereas more uniformly low-lying areas such as southern Florida, the Carolinas, and the Jersey shore are facing significant sea level rise impacts now and by mid-century, comparatively, the impacts of sea level rise in Maine will be smaller in terms of land lost and how soon chronic flooding becomes a major issue, she said.

“For some communities, they’re going to have to throw everything and the kitchen sink at this right away,” she said. But the state’s rocky stretches of shoreline provide somewhat of a buffer for a large portion of—although not all of—the coast, she said, and that buys the state some time to undertake thoughtful and lasting resiliency efforts.

That’s not to say that the state is getting a pass. There will be problems with erosion, damage to fisheries, ecosystems, and properties, and storms that result in potentially huge losses, she said.

But with this gift of time, she said, the state has the opportunity to become an example of how to engage in thoughtful planning that protects vulnerable areas and makes smart infrastructure investment choices that will ensure resiliency over the long term and across a variety of changes.

“There is the opportunity to use this time wisely,” she said, “and to become a coastally resilient state.”

Gayle Bowness of the Gulf of Maine Research Institute agrees that Maine is uniquely positioned to take the lead in resiliency efforts to combat sea level rise, but doesn’t think it’s a good idea to be lulled into complacency.

Sea level rise, she notes, won’t happen on a “smooth curve of increase.” It can happen abruptly or in jumps and spurts. And we mustn’t forget the more-frequent occurrences of damaging storms. “So, yes, we have the time, but no, we do not,” she said.

Bowness talks to communities all over the state about sea level rise and potential resiliency efforts. She encourages them to think about the big picture—not to focus on just where the water goes—but to consider all the things communities need to function well: how to get in and out of homes and workplaces; where there is access to food sources, emergency services, schools; what happens to transportation routes if they are cut off; how supplies would get in.

And that’s what some coastal communities are already doing.

Several communities, including Damariscotta, Bath, Vinalhaven, and Portland, have actually worked with engineers and scientists to create reports of the potential impacts of sea level rise and storm surge on their communities and to come up with possible solutions.

“When the city is working with … the many infrastructure changes that we contemplate, that (sea level rise) is now part of the design consideration,” said Bill Needelman, Portland’s waterfront coordinator. That ranges from open space planning along the waterfront to development projects to pretty basic details, such as the need to ballast catch basins so they don’t pop off and float when flooded.

“If you’re going to spend money and just end up with exactly what you have right now, it’s all loss,” he said. “You can make yourself more resilient at the same time that you’re building your tax base and continuing to have a vital community.”

After having its sea level rise scenarios study done, Vinalhaven now approaches its infrastructure planning with an eye toward resiliency, said Andy Dorr, the island’s town manager. “We’ve got a long list of things we’d like to do, so it’s about prioritizing those things,” he said.

Part of that is taking advantage of natural lifecycle replacement for infrastructure such as bridges, sidewalks, and roadways. For instance, Vinalhaven’s Carrying Place Bridge is in poor condition and will soon need to be replaced. As the town discusses the design for a replacement bridge, it’s considering whether or not the bridge should be raised to a height that will accommodate rising water over the expected lifetime of the new bridge.

While communities along the waterfront are getting themselves informed about the impacts of sea level rise and some even have resiliency plans in place, the biggest obstacle to realizing those plans is money.

The town of Damariscotta, like other communities, used grant money to fund a study projecting sea level rise scenarios for its historic downtown, but finding funding for making the recommended infrastructure improvements has been challenging, said Town Manager Matt Lutkus. 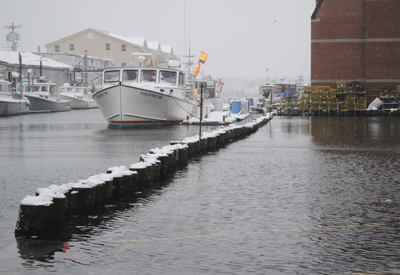 Planned infrastructure efforts for Damariscotta, some of which are underway or completed, include enhancing a park bordering the harbor; sidewalk and culvert replacements; improvements to the public parking area along the harbor; and installing a flood wall to protect the downtown. All these improvements will cost the town millions of dollars.

Grant money exists to fund studies, he noted, but most infrastructure grants either go to communities with more dire needs or don’t provide enough money to enable the town to get projects completed. So, Damariscotta has been tackling the projects it can—often with the help of private donors—in the hopes that future generations can build on what is being done now.

Finding money for expensive resiliency improvements is difficult, agreed science educator Gayle Bowness, but “We don’t want to be put in the position of needing to react,” she said. As expensive as it will be to be proactive—and everyone agrees it’s going to be whopping expensive—reacting is much more costly, she noted, on an economic level as well as an emotional one.

“What we need is to have everybody on the same page because what’s needed is change and change is hard,” she said. “We do have this opportunity. We have the data and we have the time to make some smart decisions. But it’s going to take support and we’re going to have to be open to change. It doesn’t mean we can’t have our coastal communities and our working waterfronts. It doesn’t mean that that goes away. It means it’s going to need to be different.”

Stephanie Bouchard is a freelance writer and editor based in the Midcoast. Find her at www.stephaniebouchard.net.

Over the past two years, the Island Institute, through the Tom Glenn Community Impact Fund, has supported 24 Maine island and coastal communities in their sea level rise planning efforts. This support has translated into over $118,000 for 18 projects, and these funds have helped leverage over $987,000 dollars in additional state and federal funds for these projects and communities. 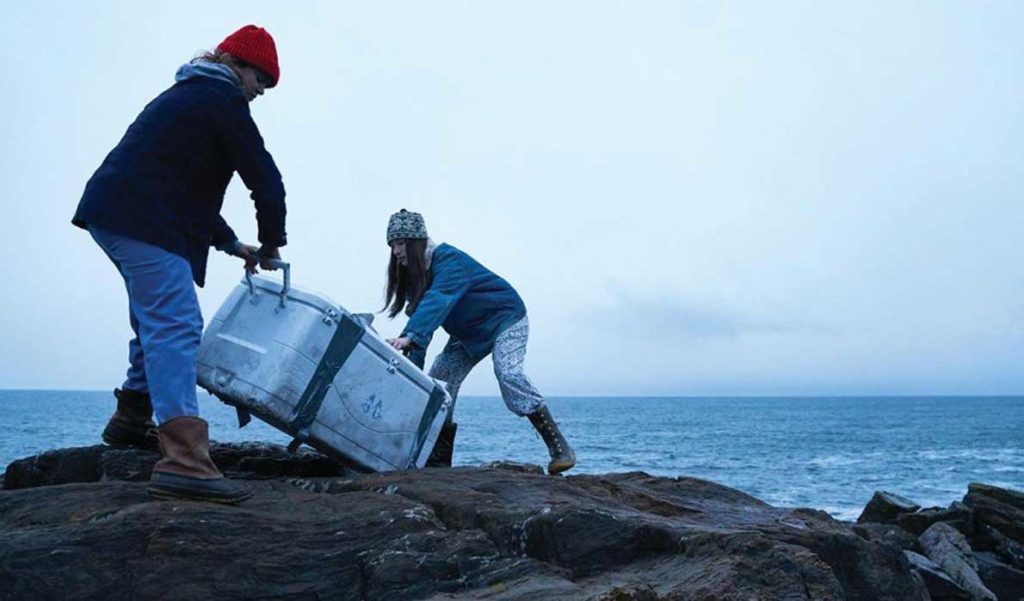 Waves batter a road on Islesboro.