The nature of Maine—its mountains, forests, rivers, and thousands of miles of coastline—defines the state. Nature sustains families who have lived here for generations. Nature is the primary attractor of visitors and new residents. A love of the outdoors unites Maine people, providing heritage and inspiration.

So it should come as no surprise that Maine is a leader in protecting nature.

Since the Land for Maine’s Future program was created in 1987, protected acreage has increased from 5 percent to 20 percent of the state’s land area, according to the Maine Land Conservation Task Force report, released March 5.

Much of this conservation is in the form of easements and was accomplished by the many active land trusts in Maine.

While acknowledging and celebrating this success, the task force, co-chaired by Sportsmen’s Alliance of Maine executive director David Trahan and Maine Coast Heritage Trust president Tim Glidden, found “a pressing need for revitalizing land conservation in Maine and ensuring that it meets the future needs of Maine people.”

Maine has a far smaller area of conserved land than other states, a fact that surprised Gov. Janet Mills.

“We’re not as far ahead as I thought we were. We have a lot of work to do,” she said in a March 5 press conference.

Much of the focus over the last few decades has been on working forestland and remote wilderness. These efforts seek to preserve the largest area of intact temperate forest and brook trout habitat in the country.

But for most people, these lands are far away.

The Land Conservation Task Force recommended creating more opportunities to connect people, including Wabanaki tribal members, with nearby nature. Fewer and fewer Maine people are experiencing nature due to economic circumstances, physical disability, or lack of experience in the outdoors.

Those who do want to go outside are finding that accessible land has been steadily decreasing as development spreads and more landowners restrict hunting, fishing, and recreation on their property, weakening Maine’s tradition of public access to private property. Maine is especially in need of access to salt water and fresh water, according to Trahan.

In contrast, some rural communities have expressed concern about lost revenue from conservation land that is taxed at a lower rate, and frustration with not being more involved in conservation decisions. These concerns prompted a separate, recent study of land trusts by the Maine Legislature’s Joint Standing Committee on Agriculture, Conservation, and Forestry.

The committee found that land trusts, as private entities, provide “a myriad of public benefits” such as protecting water quality and wildlife habitat.

One reason Maine has such an active land trust community is because Maine’s percentage of “public” (state or federally owned) lands—6.5 percent—is the lowest on the East Coast, and one of the lowest percentages in the country. Here, land trusts fill the roles that elsewhere might be played by state or federal park agencies.

“There is need for land trusts as they are providing a service to the people of the state that the government would otherwise have to provide,” the committee reported.

Land trusts are a key link between year-round and seasonal residents, schools, tourists, and ecosystems. While most of the state’s public reserve lands are in remote areas, land trust preserves are located closer to population centers and tourist destinations.

As the legislative committee reported, land trusts “connect community members with nature and improve their quality of life.” Examples included guided walks for retirement home residents and community members coping with illness, programs for students and families, and providing recreational opportunities such as hunting, fishing, and snowmobiling.

That people want these opportunities is clear from attendance at local land trust events, which are typically free; the large response to last summer’s waiver of state park fees for Maine residents; and votes for six separate Land for Maine’s Future bonds, totaling more than $132 million.

In the current session, the legislature will consider a proposal to borrow $75 million for the LMF fund, and $20 million to pay for back maintenance at state parks. Additional bills would strengthen Maine’s landowner relations program so the state’s tradition of public access to private lands continues as property ownership changes.

According to the Land Conservation Task Force, interest has grown in conserving land closer to where people live and work. Even on the coast, it can be difficult for people to get to protected areas without money or a car. Many are disconnected from nature. The population is aging and disability rates are high.

New residents, including immigrants, are unfamiliar with the Maine environment. And children and teenagers are spending less time outside than ever, yet experiences in nature at a young age are important for human growth and development. Young people need places to experience the world without guidance, interpretation, interference. Only spaces close to home can offer such an opportunity.

The mental and physical health benefits of being in and near nature, and the community benefits, are now well-documented.

Far fewer researchers have looked at the impacts of the loss of natural environments. One recent study found that when previously accessible nature was lost, residents deprived of nature felt less free, with “emotional impacts similar to sadness.” Perhaps this is why it is the threat of losing nature, places Mainers already know and love, that so strongly provokes conservation action.

Eighty percent of the state remains vulnerable to rising development pressure and land prices, especially in southern Maine and along the coast. Pressure for conversion to seasonal or year-round homes continues to threaten fishing communities and erode access to and from the shore and woods.

The Maine Land Conservation Task Force called for revived funding for conservation as well as for taking care of the lands that have already been protected, citing “rising development pressures and prices in southern Maine, a massive generational transition of Maine’s farms and woodlands, loss of public access to private lands for traditional recreational uses, the continuing degradation of open space and habitat, and the need to create access to Maine’s natural heritage for all Maine citizens regardless of economic circumstance or ability.”

Mills was unequivocal in her support for more conservation.

“There is a pent-up demand for conservation land,” she said. “We want to support a healthy, productive natural landscape and keep our state beautiful.”

Maine has one of the strongest land trust communities in the country. A land trust is a nonprofit organization whose mission is to conserve land by acquiring and/or tending land or conservation easements.

The idea of a group of people collectively holding land in trust for the public was inspired in part by the coast of Maine, and began when Charles Eliot co-founded The Trustees of Reservations in Boston in 1891. Eliot spent his summers sailing and camping in the Mount Desert Island region, and witnessed how the island’s forests and shorelines were being lost to development and privatization. He saw the same thing occurring in Boston, where he worked as a landscape architect.

According to historian Richard Judd, professor emeritus at the University of Maine, land trusts succeeded here because they are well-grounded in local political culture.

“They could adjust their mandates to accommodate anything from wilderness to working farm and choose to permit any number of locally accepted activities,” he wrote in Second Nature. The Maine coast also inspired the modern use of conservation easements, facilitated by state and federal policy and tax changes. In reaction to the loss of special places, land trusts multiplied and began working in partnership with state and federal agencies as well as private landowners.

Ben Emory, who has been involved in land conservation in Maine for nearly 40 years, including as executive director of Maine Coast Heritage Trust and a former Land for Maine’s Future Board member, sees a need for thinking ahead about the landscape in a changing climate. “Resilience and preserving wildlife habitat, even future agriculture lands, may be the most important in the future,” he said.

Today, some 76 active land trusts in Maine employ roughly 500 people, with thousands of volunteers. Collectively these organizations rank Maine second in the nation in terms of the amount of land conserved by non-profit organizations in a state. Land trusts pay taxes on 95 percent of their conserved lands in Maine (and they represent a fraction of the tax-exempt land, most of which is owned by government, hospitals, colleges, etc.).

Both the Maine Land Conservation Task Force and the Committee on Agriculture, Conservation and Forestry recommended better cooperation between land trusts and ruraltowns, and planning and policies to help municipalities address economic security. 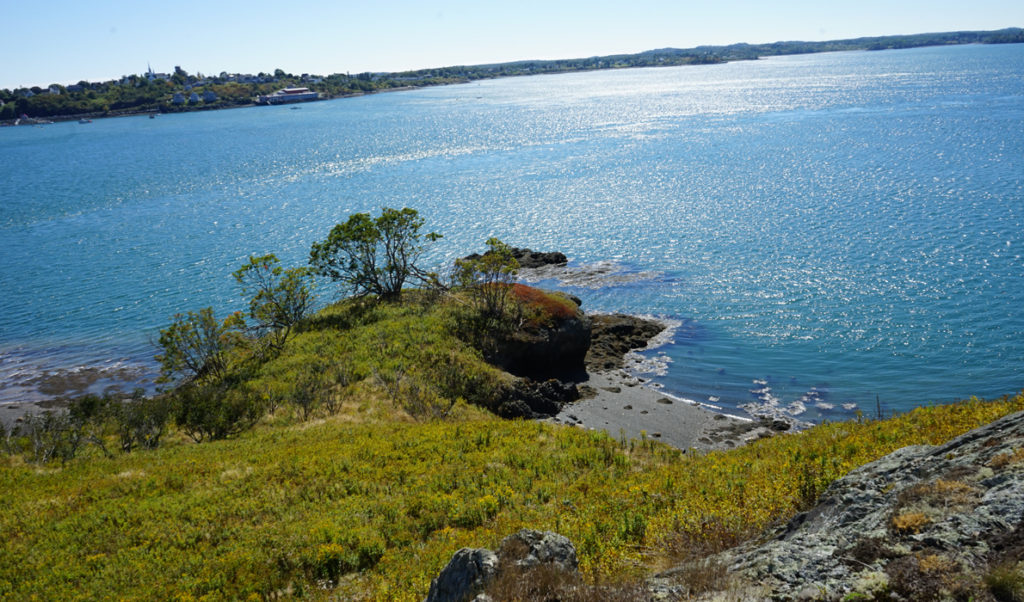 A point of land on Dudley Island