L’Amistad, ironically Spanish for “friendship,” was a 19th century schooner engaged in the slave trade, transporting human cargo, Mende people, from Sierra Leone to Cuba for work on the Spanish-owned sugar plantations. In 1839, with 53 slaves aboard, those imprisoned passengers revolted, under the leadership of Singbe Pieh, also known as Joseph Cinque, taking command of the ship, killing the captain, with the intent to return to Africa.

However, the owners, aboard, set course north up the Atlantic coast of the U.S., hopefully to be captured there and returned to Cuba. The ship was taken by a U.S. revenue cutter off Montauk, Long Island, New York; the slaves nonetheless escaped but were retaken on land and placed in prison in New Haven, Conn., and tried on charges of murder and piracy.

The ensuing legal battle focused both on property and its return to owners in Cuba, and charges against those owners for the illegal enslavement of Africans. The case was known as The United States vs The Amistad (1841) and found its way to the U.S. Supreme Court where the Mende prevailed, exonerated for having rebelled in self-defense, and were restored their freedom.

Forty-three returned to Africa in 1842, aided by the United Missionary Society, led by James W.C. Pennington, a Congregationalist minister and former fugitive slave, active in the abolitionist movement. The Amistad incident became a rallying cry for emancipation and justice in the fight against slavery worldwide.

In that spirit, over 150 years later, a replica of L’Amistad was constructed, a modern vessel intended to sail as an evocation of that history, its memorialization, and its educational potential to continue an international conversation about slavery and its subsequent impact on African-Americans, past, present and future.

Funds were raised, much of it from black church organizations, and voyaging commenced to port cities in the name of public outreach and celebration of African culture.

Under the direction of a non-profit, Amistad America, the schooner made extensive passage along the Atlantic coasts and an astonishing return to England and then to Sierra Leone in commemoration of the 200th anniversary of the abolition of the slave trade in Britain in 1807, during which the crew broadcast live to the United Nations General Assembly from a point at sea halfway along the route called the “middle passage.”

To my thinking, that single event linking the iconic ship and crew to the global community was the single most dramatic moment in what thereafter became a second part of the tragedy, with the ensuing confusion over finance, governance, and viability of the original intent, and decline as a vital symbol and tool for the ongoing discussion of slavery and its consequence in the U.S.

The ship now resides at the Mystic Seaport Museum, where she was built, and now presumably as an educational exhibit, voyaging future unknown.

Initially, the Amistad and its inaugural voyages captured the imagination of African-Americans, and events at first ports of call were enthusiastically promoted and attended by the community as a celebration and educational impetus for discussion and remembrance.

Why the ensuing decline is a complicated story, but one underlying element is the uncertainty of management and finance more and more reliant on government and philanthropy that had interests and agendas other than slavery and its relevance to other suddenly more pressing interests. Even some in the African-American community objected and did not participate, viewing Amistad as counter-symbolic to improvement of race relations and integration, indeed an evocation of a history willfully to be forgotten.

All of us, regardless of origin or history, require icons upon which to focus our memories and our aspirations. As we are challenged to face issues of race in the U.S., Amistad retains its meaning as “friendship,” and remains a powerful tool, not just of its particular event in its particular time, but more importantly as a symbol for freedom, for justice, for equality, and for integrated understanding of how to succeed as a community of “we, the people.”

What if Amistad could re-launch as a symbol of reparation, “the making of amends,” around which all Americans might gather to discuss why and how we might resolve what separates us on a voyage of rebuilding and renewal? With all the skills and collaboration required to sail a ship, with the specific navigational way points required to get successfully to a new destination. Peace and justice for all.

Peter Neill is the director of the World Ocean Observatory, which produces weekly radio essays that can be heard on WERU-FM, 89.9, and at http://www.worldoceanobservatory.org/world-ocean-radio. He lives in Sedgwick. 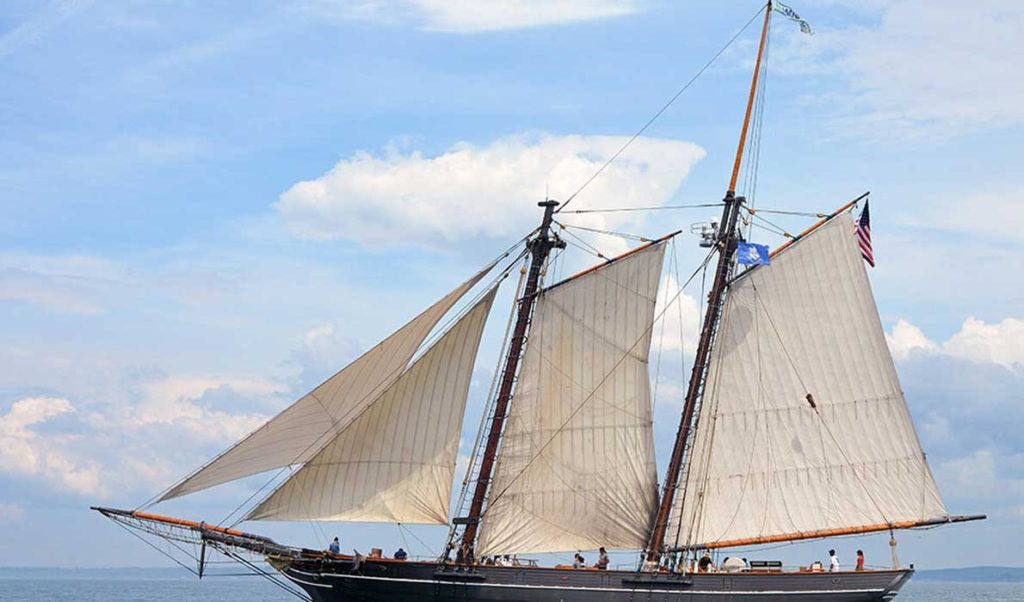 A replica of the Amistad.