On Oct. 1 of last year, a man with no legs and just a few fingers put together one of several final meals at one of coastal Maine’s iconic—and most improbable—seafood restaurants. It was a haddock and havarti sandwich, which I enjoyed and with a gusto that I’d reserved over the years for precisely that exquisite sandwich.

The “season” had passed, as it does every year on Labor Day, and I stood with other year round islanders, each waiting for a final go at their own favorites, each adding their voices to the litany of grateful well-wishers who’d been stopping by recently to wish Lonnie and Kathy well and to tell them how much they and the Harbor Gawker had meant to them and to the Vinalhaven Island community.

“Fish and cheese,” Lonnie yelled from his perch, whereupon a responding waitperson, one of his grandchildren, retrieved my sandwich from the kitchen and delivered it to me. Several of us had taken a table in the far corner, next to the rushing water and, enjoying our meal with bittersweet relish, we reminisced about this place, about this unusual building, and about the gift to us all that had for 45 years been the Harbor Gawker.

The Harbor Gawker’s “improbable” nature had as much to do with its history—a former bowling alley perched on pilings in the knee-deep tidal stream that rages twice daily from Carver’s Harbor to Carver’s Pond—as with Lonnie himself. Having lost his limbs to Beurger’s disease several years ago, he commanded the kitchen from a swivel stool, twirling as much as 360 degrees to access a range, a fryer, a grill, and an oven in order to create whichever of 140 options a diner craved.

Bellowing out to his wait staff the name of each dish as it was readied, Lonnie managed the needs of 60 to 70 customers at a time. On a sunny day in the middle of July, when a line often extended out onto the sidewalk, it was a marvel to behold.

My own affection for the building dates back to the 1950s, when it was the Cascade Lanes, the scene of nightly bowling contests involving nearly all of the adults in our small island community. I was one of about a dozen adolescent pin-setters who risked life and limb to return ten candlepins to their standing positions after each three-ball frame was bowled. For 10 cents a string, we huddled on a little ledge above the pits as 2½-pound balls came hurtling down the lane, sending “deadwood” flying in all directions.

Pilings that respond to wind-driven storm tides and the naturally unstable sea bottom are a puzzling location for any building, let alone one housing pool tables that must be kept perfectly level and alleys that have to be nearly so. The table legs had to be continually shimmed to ensure the balls did not seek pocketed refuge unassisted.

Lonnie, a Vinalhaven native, and his wife, Kathy, had been involved in the food business since they were old enough to work, serving apprenticeships at the Red Jacket in Rockland and The Helm in Rockport. In 1988, they opened a restaurant of their own, the Touch of Class in Rockland, which was especially popular with locals and day-tripping islanders like myself.

Committing themselves finally to return to Vinalhaven, where Lonnie’s folks, Barbara and John, were already operating a very popular little take-out called the Harbor Gawker, he and Kathy resolved to make this their home; to raise their kids on the island, to do what they knew best, and to have fun along the way. When his folks opted to operate a regular sit down restaurant, The Mill Race, in the former Cascade Lanes building, Kathy and Lonnie took over the nearby Harbor Gawker and, when John and Barbara retired in 1996, they moved the Gawker to that much bigger space.

Where once was a pool room, there was now an 80-seat dining room, and where teams of bowlers once cheered on one another, a kitchen. Like their felt-topped predecessors, the dining tables often had to be shimmed (on one occasion my own credit card was discovered several days after I’d tucked it beneath a leg so I could enjoy my dinner without it sliding off to leeward).  The Gawker became a favorite among islanders and among visitors who often came long distances just to enjoy their own favorite of Lonnie’s creations.  Even outside, folks at the end of the line could hear Lonnie inside bellowing out the name of whichever meal he’d made ready.

In 2002, suffering from diabetes, Lonnie was diagnosed with Beurger’s disease, an affliction that causes blockages in blood vessels. He underwent gastric bypass surgery, which resulted in a dramatic loss of weight and diminished diabetic symptoms, but the Beurger’s persisted. He lost fingers and toes, then one lower leg, and eventually the other. He made modifications to his kitchen gadgetry and cooked from a swivel stool, its backrest removed so as not to interfere as he whirled from one station to another.

The Gawker had been on the market for the last several years, as Lonnie and Kathy came to grips with Lonnie’s deteriorating condition. Last year they negotiated a sale with Lauren and Brian Weisenthal, a young couple from “away” with considerable food service experience who, now in the midst of an extensive remodeling, clearly plan to put their own stamp on the place. The Nightingale will open this month or next. They have big shoes to fill and we are all looking forward to them doing precisely that.

Phil Crossman is the owner of Vinalhaven’s Tidewater Motel, where guests slumber above the same rushing tidal stream that flowed under the Harbor Gawker and now the Nightingale. 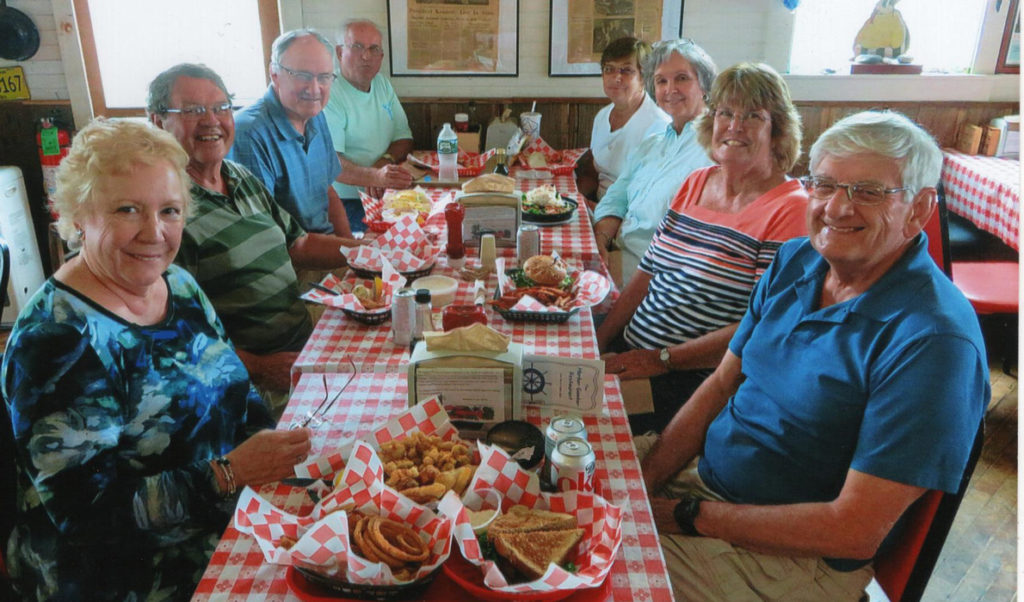 A final meal at the Harbor Gawker.