My relationship with Chandler “Blackie” Blackington began about a decade ago when I traveled to Vinalhaven to visit the community’s medical center and eldercare home, exploring the possibilities for Swan’s Island. Blackie was my tour guide. He picked me up at the ferry terminal on Vinalhaven and showed me around the island. We visited the medical center first and Blackie shared first-hand with me what the facility and providers meant to islanders. Next, we visited the eight-bed Calderwood Home, where elderly Vinalhaven residents were living together in a home-like setting.

Blackie and I shared a lunch that day at the Harbor Gawker, a restaurant on Vinalhaven’s main street near the harbor. While chatting over piping hot bowls of fish chowder, a friendship was born.

Blackie wrote a weekly email newsletter called “Our View” for Vinalhaven residents. I write the Swan’s Island News. As a professional courtesy, we shared our newsletters, free of charge, with each other. Over the years, I learned a lot about Vinalhaven through Blackie’s newsletters, and also a lot about Blackie and his family.  His love for Vinalhaven’s history, his dedication to his role in emergency services as their official photographer, and his passion for his family were all revealed through his stories.

We communicated many times about how much to charge for our newsletters and how to get more subscribers. Blackie often commented on the format of my newsletter, his being a standard email format with photos inserted between the text. I encouraged him to try the software I use, but he claimed he was too old to learn something new.

Over the years, I visited Vinalhaven several times and while I was there, Blackie and I would share a lunch, always at the Harbor Gawker. My most recent visit with Blackie was in November, just three months ago. He was a rehab patient in Rockland at the time, recovering from a broken ankle, an injury he suffered during a fall at his home on Vinalhaven. It was so great to visit with him—to receive one of his big hugs and have a conversation, even if it was about his declining health. Blackie had a myriad of other health issues besides the ankle injury, but his hope was to return to his home on Vinalhaven and I am happy that he was finally able to do that.

When I received news of his passing a few weeks ago from Bub Hopkins of Vinalhaven, I was saddened. A true gentleman gone from this earth. I asked if Blackie was home on the island at the time of his death and Bub said he was. My heart lifted knowing he was at his home on Pequot Road, Vinalhaven—just as it should be.

Blackie’s son Neil penned the last ever edition of “Our View” on Friday, Jan. 16, just two days after his father’s death. He included a personal note at the beginning about his father’s passing, including the following:

“Wittingly or not, you all played a part in his greatest pleasure in later life. For ten years his daily routine began by scouring news sources across the Internet, conferring with other island editors, reading news articles and speaking to folks; from both here and ‘away.’ He loved to write, and he coupled that with a love of this island, its topography and its people.”

Several photographs were included and a complete obituary of Blackie’s amazing life—from boyhood times on Vinalhaven, to his professional career in public relations with the Greater Boston Red Cross and John Hancock Insurance.

I will miss seeing the newsletters from Vinalhaven in my email box each week, but mostly I will miss my friend Blackie, a true representative of the Greatest Generation. Good-bye, my friend. 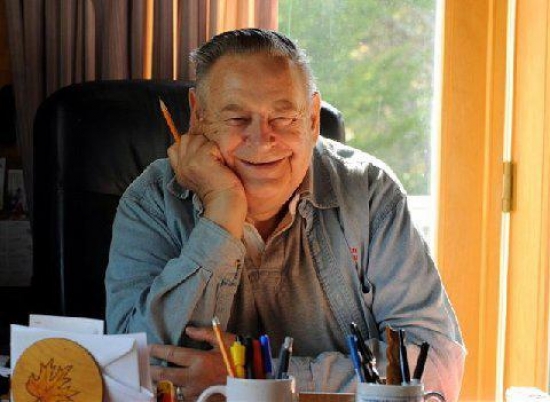