My grandmother Edith Johnson Searles packed sardines in Lubec at a time when that prosperous town hosted 23 sardine (herring) packing plants. My grandfather, Henry Searles, was a native of Canada’s nearby Campobello Island, who moved across the sound to marry my grandmother and live with her in South Lubec. For a while, Henry was a fish inspector in those sardine packing plants.

Neither would have ever imagined a time when Maine would pack no sardines, in Lubec or anywhere else in the state. The plant where my grandmother worked is now a museum. So when I learned of Joe Upton’s memoir of the herring fishery, published initially in 1986 and republished in 2015 by Tilbury House in Thomaston, I grabbed a copy, eager to learn more about what happened to these fish and this industry.

Herring Nights is a gripping tale, full of hard-nosed, hard-working fishermen, reveling in a life that kept them at sea, and (sometimes) paid the bills. And Joe’s book includes the women like my grandmother who took those sardines and packed them for shipping all around the world.

“When there were canneries up and down the coast,” he writes, “there were thousands of cutters—women that worked with scissors, trimming the herring, putting them into cans. Then when the foreign fleets came and the herring disappeared, the canneries closed, and the women often found better, easier work. And now, when at last a few more fish had come back to the coast, the canneries couldn’t find enough women to pack the fish and were forced to operate at reduced capacity,” he reports.

That might have been when my grandmother took a job as the receptionist for Lubec’s physician, a job she enjoyed for many years. Probably easier than packing sardines, too!

A lot of things led to the demise of the herring fishermen. Here’s one of them. On an early September evening, the plane that scouted for herring for Joe and other locals “spotted a good bunch of fish, but by the time we arrived, the ‘Gloucester boys’ had appeared out of nowhere, six or seven large steel boats, great noisy pools of light in the darkness. They had giant nets, half a mile long and 250-feet deep, and they could pump millions of pounds of fish aboard. It was a sickening sight.”

While the locals shared their herring bounty with each other, the huge boats from Gloucester, Mass., did not. “Instead of offering what was left to the remaining fleet,” Joe reports, “they’d just open their net, and the dead fish would sink to the bottom, wasted, hundreds of thousands of pounds at a whack.”

Joe added an epilogue to the book when Tilbury republished it. “I didn’t know in 1977 that this book would become a glimpse into a vanished way of life,” he wrote. “When I took the 70-foot sardine carrier Amaretto to Vinalhaven that summer almost 40 years ago, I found myself in a fishery so well attuned to its community that it seemed certain to continue forever.”

In the final paragraphs, he points out the possibility of more trouble for hardworking lobster fishermen, currently prospering. But as Joe notes, “What clouds the future is something the fishermen have no control over: a slow but persistent ocean warming that seems to be moving the most productive fishing areas progressively eastward. As one lobsterman put it in 2014, ‘Just look in the fishing paper: All the big boats being built now are for Jonesport and further east.'”

He continues in that cautionary vein: “It’s great that the lobster fishery has been able to take up the slack as the other inshore fisheries dwindled. Still, one suspects that many fishermen, even today, would choose the days when you made your living from several species rather than just one. For truly, today, the survival of Maine’s fishing villages as we know them depends on King Lobster.”

As I read Joe Upton’s wonderful book, subtitled, “Remembering a Lost Fishery,” memories flooded my mind of Nana Searles. My grandfather Henry died of a heart attack before I ever got to know him, but Nana was a big presence in my life. She never talked much about her sardine packing days—they were well behind her by the time I was born. And now I have a much better idea of what that was all about.

It was about working hard, prospering from the bounty of the ocean, and living in close-knit caring communities. It was our past, and we can only hope, our future. And let’s hope that our grandchildren won’t ever have to read a book, Lobster Days, Remembering a Lost Fishery.

For more of George Smith’s writing, including outdoor news, editorials, the “Travelin’ Maine(rs)” columns, and book reviews, go to www.georgesmithmaine.com. 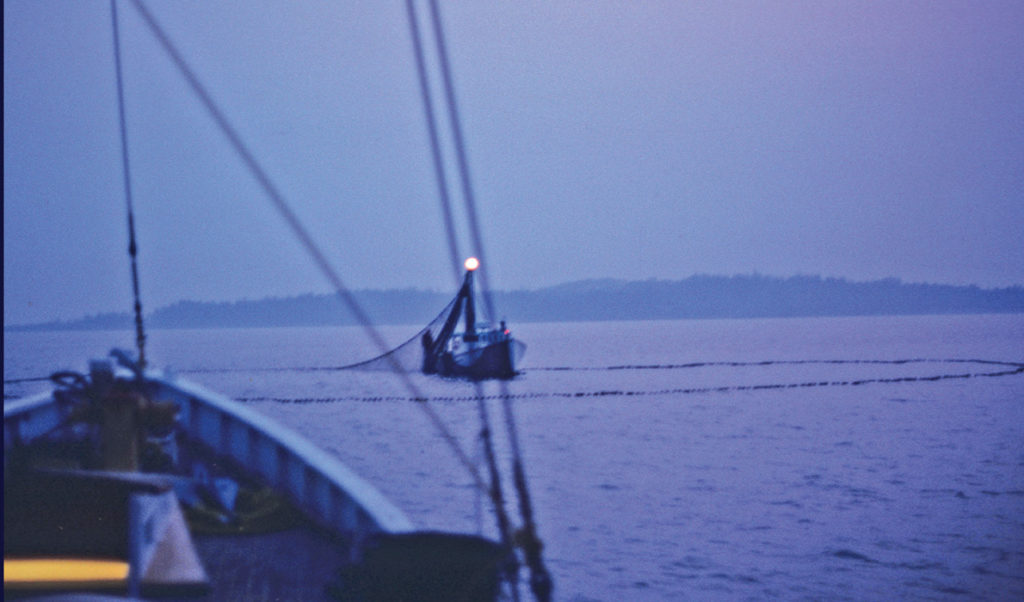