This month, we sought reader thoughts on affordable housing, asking on The Working Waterfront’s Facebook page: Has your town already been priced out of the starter house market? If prices are high, what effects are you noticing? Are there too many seasonal homes? What might the state do to create more affordable housing—rental and owner?

Leanne Archer: All you need to do is look at the tax records in Lubec. The town is a tourist attraction for outtah staters. They’ve “improved” the town so much that the founding families can’t afford to live there. I can’t afford a home there. I’ll buy in Trescott or Machias or Cutler.

Patrick Haugen: In Castine, restrictive zoning, specifically two-acre zoning for lots not in the village. It is exclusionary zoning because it creates higher upfront costs.

Donna Wiegle: A move-in ready, starter home on Swan’s Island no longer exists for a young couple. You might be able to buy a fixer-upper, but then it is no longer affordable once you do the needed work. Modular homes are becoming popular and seem to be a more affordable way to get into a house. We have a serious year-round housing shortage.

Hannah Pingree: North Haven has a significant housing issue, at a crisis levels, in my opinion, for a town that wants to keep and attract young people year-round. There are currently only seven properties for sale on the island and the cheapest house listed is $475,000 (which is not winterized) and the most affordable land currently for sale is $180,000.

If you buy land, the cost of utilities, a road, and construction is very significant on an off-shore island. The rental situation is just as dire. The state had a short-lived program to help build more rental housing for middle-income islanders which was very helpful but that program has been out of money for a while.

Much more needs to be done if we want any future for our island schools and young people, but I don’t see that help likely to come from the state in the near future. Most of the larger housing programs really don’t function at the small scale an island or rural Maine community needs.

Katherine Hutchinson Warren: Vinalhaven isn’t far behind. We year-round residents with modest incomes can’t afford to repair the fixer uppers or to make the down payments on land. Rentals are also getting way too high but it’s all a decent bargain for the seasonal folks, which makes the rental market even worse.

Kyle Fletcher Baker: Yarmouth taxes on my family’s eight acres of land went from $1,700 to $19,800 in 20 years. Force the state to pay for its share, and exempt all residents without kids in the school system from being taxed, under a total income of $30,000 or less.

Breanna Pinkham Bebb: Certainly strained in Belfast and surrounding towns, but not yet impossible. I think a piece of the problem is how people define “starter home.” We bought our first home a year and a half ago and got a good, practical find for our budget. Some people’s expectations are pretty high for their first home.

Cheryl Sullivan: I live in Bangor (but) I would like to live in Portland, as I like a bigger city and better transportation. I like the idea of living near a train station so I could get to Boston, etc. easier. I don’t want to drive any longer. I wish there was affordable housing in Portland. I love living in a city right on the ocean. I grew up in southern Connecticut near Long Island Sound. I find it very sad that so many people are priced out of a city like Portland now.

Brook Ewing Minner: There are still affordable houses in Bucksport but the market is getting very tight, very fast.

Alexis Zimba: In St. George, the home prices are insane. We have been looking off and on for the last two years and any home that comes on the market at under $200,000 is either a mobile home or a major fixer upper, and even those get bought up quick. We are even looking at land with the thought of building our own small house (under 1,000 square feet), but even this morning I was looking at land and it was going for about $20,000-$30,000 per acre!

Joseph Charpentier: People of my generation don’t really have an interest in owning a home (for the most part). I feel this is partly why Maine as a whole is growing older at an alarming rate—you can’t stay if you don’t want to participate in home ownership. The closest we could get to Boothbay Harbor was Bath, and even then we were lucky to find an apartment.

Tina Beal: I recently bought a house on Beal’s Island. The only reason I was able to afford it was because I knew the owners and I got a really good deal. All other houses on the island were either out of my reach financially or needed so much fixing up that it wasn’t worth it. Another option was to buy land and develop it, but by the time I did that, I would have been able to afford a $5,000 trailer. My house now has less than an acre of land, no ocean view, and the taxes are $2,000 a year. I have two college degrees and work full time, and it still doesn’t pay enough. It’s difficult for single, young people in my area to buy homes.

Martha White: We run a boatyard in Rockport Harbor, employing about 50 workers, many of whom commute long distances (including Waterville) in order to afford to own or even rent a house. We are actively looking for solutions for workforce housing. 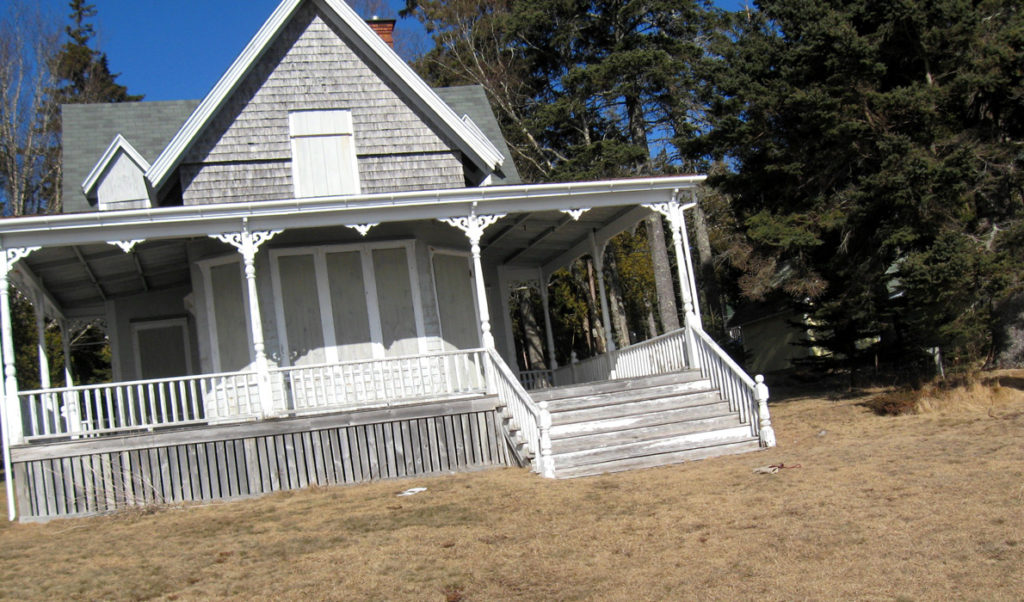 A house on Hancock Point boarded up for winter.