The Quoddy Tides bills itself as the “Most Easterly Newspaper Published in the United States.” That’s neither an idle boast nor an irrelevant fact.

As editor and publisher Edward French chats with me about the paper’s history and role at its office on the Eastport waterfront, he glances out the window, from which we can see the city’s fishing pier, Canada’s Campobello Island and—at this moment—a whale breaching.

That proximity to the saltwater world is important because it is the newspaper’s lifeblood. Eastport—an island until the 1930s, when a causeway to the mainland was built as part of a never-completed tidal power project—sits at the confluence of Cobscook and Passamaquoddy bays.

The paper, French explains, comes close to ignoring the international border in its coverage choices. A look at a map of the region explains why—the New Brunswick islands of Campobello, Deer and Grand Manan and peninsula towns Black’s Harbour and St. Andrews are as geographically integral to Eastport as are Lubec and Perry.

As community newspapers often do, The Quoddy Tides features “correspondents” who file columns on local social and business matters from their hometowns of Perry, Whiting, Robbinston and Machiasport, but there also are filings from Deer Island and Grand Manan.

“Historically, there have been close ties [between Maine and New Brunswick], primarily because of fishing,” French says. “The paper has really tried to hold onto that,” though post-9/11 border rules have made it harder. 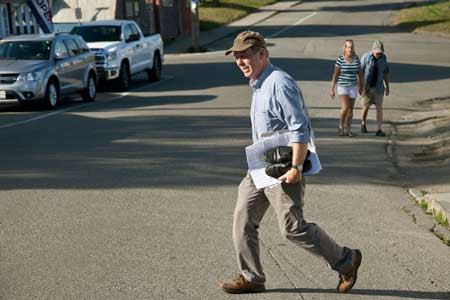 French on the beat; the shoes he’s carrying are best for playing the organ, he says. French plays at Eastport’s Catholic church.

Three letter to the editor writers in a recent edition hail from New Brunswick, including a member of the Canadian Parliament. One of those Canadian writers compliments French as one who seems, in his writing, “both wise and caring.”

In person, French, 57, is thoughtful in his responses to questions, speaking softly, but he repeatedly asserts what he believes is an essential element of his work—leading and supporting the community.

“We’re always trying to fully understand the issues and give the nuance that’s necessary for readers to understand them,” he says, but adds: “We try to shape the future of these communities, too.”

There’s certainly a salty quality to the paper. Page 3 is devoted to shipping news, listing vessel arrivals and departures in Eastport and Lubec: “The Eidsvaag Vinland arrived on July 26 and sailed on July 30 with a cargo of salmon feed to Newfoundland…”

But fishing has declined.

“The herring fishery is pretty much over,” he says, with the last of the weirs on the Maine side long gone. There still are herring weirs on Campobello, Grand Manan and Deer islands, though. About 20 lobster boats now operate from Eastport, and the urchin and scallop fisheries remain active.

In addition to covering the marine economy, the paper features plenty of hard news. French recently broke the news that the third of three proposals to build liquefied natural gas terminals in the region was dismissed by federal regulators. Turmoil among the leadership at Sipayik, the nearby Passamaquoddy Tribe reservation, generates front-page stories. A fight to keep a state human services office in Calais is an ongoing story.

The Quoddy Tides is very much a family enterprise. The French family moved to the region in 1955, Edward said, with his father arriving to be the town doctor. Rowland French had grown up in New Hampshire, and his wife, Winifred, hailed from New Jersey.

Winifred learned that the Eastport Sentinel had gone out of business in 1953, and the Lubec Herald followed suit in the early 1960s.

“She really felt there needed to be a voice for people who lived here,” French said, even though she had no newspaper background. She traveled the Quoddy area, talking to stakeholders before launching the paper.

“I was supposed to be a doctor, but I’ve always loved writing,” French said by way of explaining his presence here. He majored in English at Middlebury College in Vermont, and then earned a master’s degree in modern literature at the University of East Anglia in England, but the family business drew him back.

“I grew up with it,” French said, helping out as a child with the endless tasks involved with the small business.

In those early years, the typesetting was done on Deer Island, with the copy and ads traveling on the seasonal ferry between the island and Eastport.

“In the winter, we’d have to find a fishing boat to bring it over,” he recalled, including a potentially dangerous passage through the Old Sow, the tidal whirlpool.

The paper publishes on the second and fourth Fridays of the month.

“My mother decided that,” French said. “She had a focus on the marine environment,” and felt that a less hurried publishing schedule allowed for a writer to “step back and give it more time.”

There are six full-timers on staff, including French’s wife, Lora Whelan, who is a reporter. What’s it like editing your wife’s work?

“She’s a very good writer,” is all he will say.

In all, about 30 contribute to the paper. His freelance reporters “don’t necessarily have a background in journalism,” French says, “but they’re committed to their communities.”

Covering the region is a business decision, he adds.

“We couldn’t survive as just an Eastport paper.”

Though no other news media covers the region the way The Quoddy Tides does, that lack of competition hasn’t made the paper rich. “We’re holding our own,” French says, which is the status of many newspapers. Circulation is holding steady at 4,600, and the paper has subscribers in all 50 states. Well, maybe not in North Dakota, he adds.

The paper has tip-toed into the internet, posting just its front-page stories on its site, but is not especially active on social media, he admits.

A walk around downtown reveals that the arts and artists have arrived in Eastport. Galleries and shops with local crafts are well represented. French covers that sector of the community, but seems wary about it dominating his pages.

At Dastardly Dick’s coffee shop, the locals give the paper high marks for its balanced approach, serving residents and tourists alike.

“It’s the lifeblood of this town,” says David Orrell. Reading the paper “proves or disproves all the rumors you’ve heard,” he says. “I send it to my sons in Washington D.C. and they read it thoroughly.”

Keith Andreucci likes the calendar of events. “You can fill your calendar with what you want to do for the week,” he says.

Jim Willey, a summer resident, likes French’s editorials, and likes “All the local news coverage” from the small towns scattered around the coast.

French notes that his mother didn’t write editorials when she ran the paper, but he does.

“I think it’s fine to take a stand,” he says, as long as the news coverage of the issue has been fair.

Covering the Passamaquoddy Tribe, which understands itself as a nation within a nation, requires a deft touch.

“We’ve always been respectful in our approach,” French says, “respectful of the cultural differences.”
But several years ago, the newspaper brought suit against the tribe to get access to documents relating to one of the LNG proposals.

“There were some hard feelings,” French says, but hopes they have passed. “In some ways, we hate covering these stories, because they divide the community,” he says.

“I usually figure if I can walk down the street and fewer than half the people cross over to the other side, I figure I’m doing a good job,” he says. 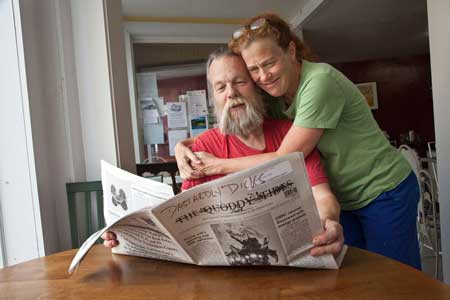 Peter Frewen, a classical musician and conductor who moved permanently to Eastport in 2013 with his wife, Jenie Smith, owns and operates Dastardly Dick’s coffee shop. Smith is the town doctor, and the couple live—coincidentally—in the house Edward French grew up in with his doctor father.

A copy of The Quoddy Tides makes its way around the coffee shop’s tables, perused by customers.

Frewen has thought about the paper and its role in the community. One criticism he offers is that he would like to see more coverage of the arts scene.

“There is a vibrant, vibrant arts community here,” he says, that began to take root in the 1970s

But he praises French and the paper because “it represents what goes on here,” even when stories rankle locals.

“He is willing to take risks. His particular interest is political issues of the region, and that’s what elevates this paper,” Frewen continues, explaining them “in an intelligent way to provide understanding.”

And he gives what may be the highest praise a community journalist can earn: “He’s not a representative of anybody’s chamber of commerce, but he loves the community. He’s got opinions about what right and what’s wrong, but that’s not why he writes. He’s writing so people know what’s going on.” 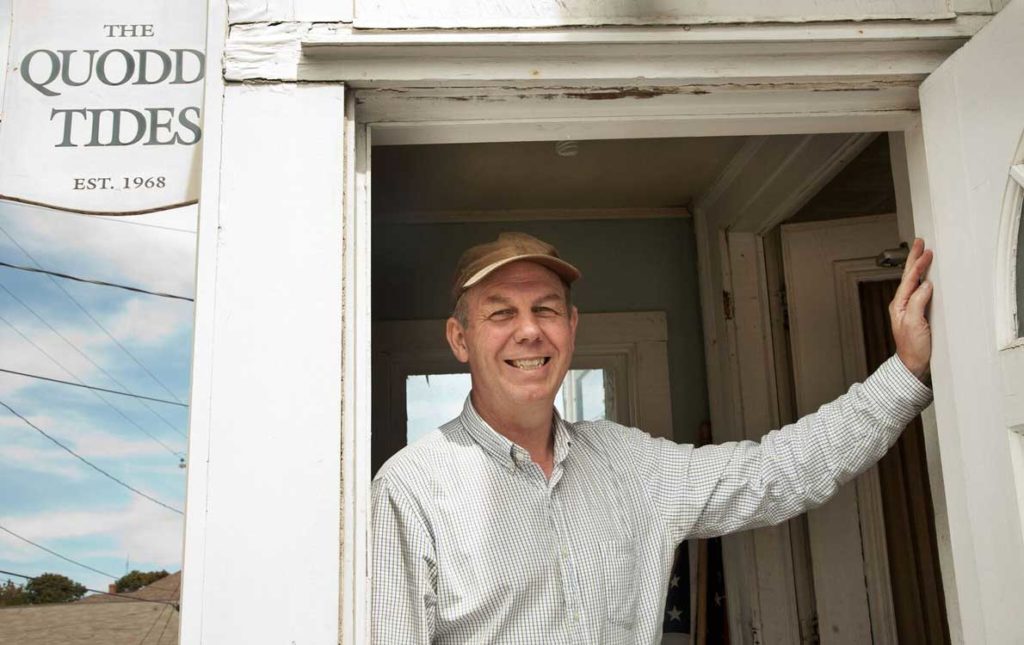