When philanthropist Roxanne Quimby bought the 113-acre Ocean Wood Campground on Schoodic Peninsula three years ago for $2 million, her intent was to save the land and its 3,200-feet of bold ocean frontage from development. Now she has a clearer idea of the best possible use of the land in the village of Birch Harbor. And that future is conservation, with some public use to honor the land’s campground history.

“This is a big responsibility,” Quimby said in an interview recently at her saltwater farm in nearby Gouldsboro. “I want to do it right and I don’t need to do it fast. This will never happen again in my lifetime. This is a very unique opportunity.”

The founder of Burt’s Bees bought the property in September 2016 just before it went up for auction. Quimby and her construction manager, Heath Barnes, have spent the time since then assessing the condition of the campground.

Ocean Wood closed in 2010 and over the years the campsites and roads became overgrown. The septic system is unusable and dramatically out of compliance by today’s standards. Spigots that once provided water from a single well have deteriorated.

By poking through the overgrowth, Barnes was able to determine, by finding rotting picnic tables beneath, that there were about 68 to 70 campsites. Quimby and Barnes realized the infrastructure was in much rougher shape than they had anticipated. In order to provide septic, water, and roads to support that many campsites would be costly and, more importantly, would require removal and movement of large swaths of earth and trees. In the meantime, campers who had returned year after year when Ocean Wood was still open accepted Quimby’s offer to help clear the sites in exchange for free camping.

The conditions are rustic. There is a single porta-potty for campers and they have to carry in their own water.

While trying to decide what to do next, Quimby became acquainted with the architect Todd Saunders, a native of Gander, Newfoundland, who has been living in Norway for several decades.

Saunders is best known for the unique 29-room Fogo Island Inn on Fogo Island in Newfoundland. The inn, which operates as a non-profit, was the brainchild of Zita Cobb, an island native who made a fortune in the fiber optics industry (see the story about the inn in the 2014 edition of Island Journal).Saunders is a nature lover first and an architect second. He said his approach is to create the smallest footprint possible that will generate the greatest public benefit.

“This is the first project I have said yes to in six months,” said Saunders, who will be returning to the Schoodic Peninsula every six weeks or so, at times with his children. “My thought is always how small a piece of architecture I can create that can influence a community.” 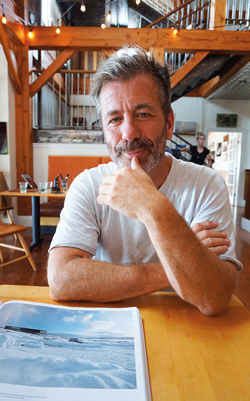 Quimby’s idea is to provide three levels of camping with many fewer sites. The first level would be a limited number of wilderness sites, some on the ocean, that people would access on foot. There is an existing outhouse for these campers and they would have to carry in their own water.

The second level would be “glamping” sites, which provide a slightly less rustic experience such as a furnished tent on a platform or a yurt.

Saunders’ initial commission is to design and help build about a half-dozen of these glamping sites. Quimby wants the structures to include just a bed with no linens and a table. There would be a community bathroom using green technology for waste, water, and power.

“I want to keep it simple,” she said. “I want the cleaning to be limited to a broom. At the same time, I don’t want this to have any snob appeal. I want something that is unique, interesting and comfortable yet very affordable.”

Saunders said the glamping structures would likely be small, wooden buildings constructed by hand. He is toying with the idea of adding a small structure as a library, another as a co-working space, and another designed for children’s play space.

“These buildings would be exactly what is needed and not at all what is expected,” Saunders said. He and Quimby intend to proceed slowly and carefully so they can gauge when they have reached the threshold that the land can comfortably support without compromising the wilderness experience.

The third level of camping would be sites for small pop-up campers that would be designed so vehicles are not visible when other campers are passing through.

“I want a bend in the road so that people going through don’t see a long row of pickup trucks,” Quimby said. “I want to give the effect that there is nothing else there.”

She had already decided at the time she purchased the campground that she would not allow large recreational vehicles because such sites already are available in abundance at the new Schoodic Woods Campground a few miles away in Winter Harbor. A private campground in Winter Harbor also rents RV sites with water views.

Separate from the campground project is an 80-foot-by-36-foot barn that Barnes, Quimby’s contractor, has been renovating for weddings, family reunions, non-profit meetings, and other gatherings. The shingled, gambrel-roofed barn has a small kitchen that caterers can use to plate food.

There will be limited parking adjacent to the barn with a larger parking area for 50 to 60 cars a short distance down the road. The parking will be where the now failed campground septic system was once located.

“It’s for people who want to be in the woods and have a good time,” Quimby said.

Quimby said she could have simply let the land stand as it is, undisturbed and undeveloped, but she felt she needed to honor the tradition of camping on the land, though at a much smaller scale.

“I am a conservationist, but I can’t just close it off,” she said. “I also cannot put elaborate infrastructure where there is none.” 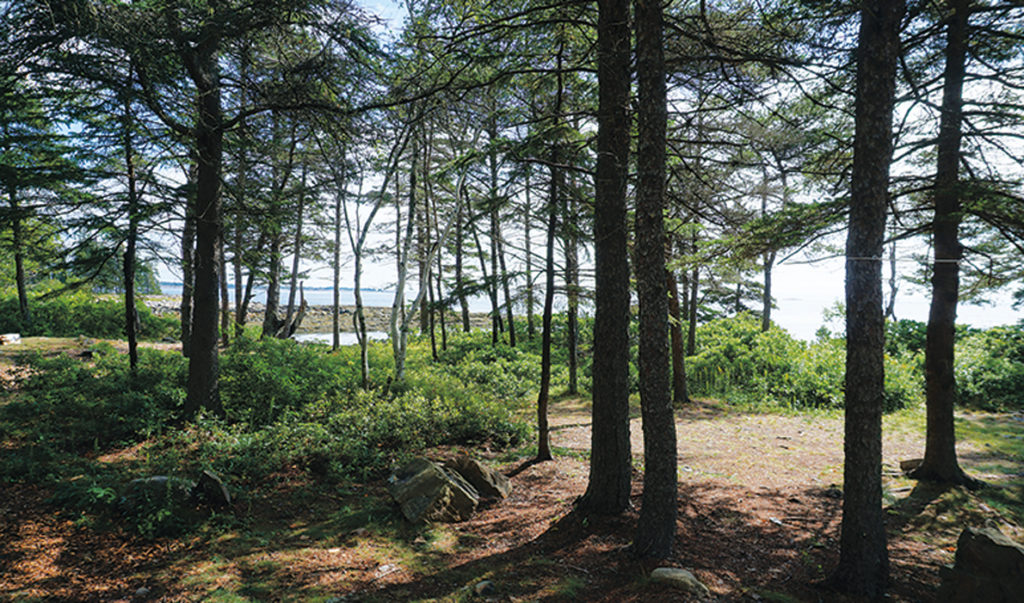