Maine’s Downeast coastline is so far north and so far east that northern Europe seems just over the horizon. Which it is.

Washington County’s Port of Eastport is among three deep-water ports on the Maine coast. The two others are in Portland and Searsport. Eastport’s Port Authority bills Eastport as “the deepest natural seaport in the United States.” That’s almost true, as there is a deeper one in Alaska, thousands of miles from the East Coast.

Known for its massive tides, the Bay of Fundy provides the Port of Eastport with 55 feet of depth, even during astronomical low tides. The port’s 635-foot pier accommodates cargo vessels as long as 1,000 feet. The 75-acre complex has been evolving since 1981 and now includes five warehouses with 33,000 square feet for cargo storage.

The port authority invested $12 million to design and build an automated bulk import/export conveyor system. In the global cargo vessel shipping world, there is nothing like it on the East Coast north of Morehead City in North Carolina. Not in Boston. Not in New York. Not in Portland.

“The state of Maine has a gem that could be the loading dock for the entire East Coast, all owned by the people of Eastport,” says Chris Gardner, executive director of the Eastport Port Authority. “Cargo ship congestion has become a real problem in Boston, New York, and New Jersey. New York has had to spend millions on dredging. We haven’t had to spend a dime.”

The bad news includes the infrastructure reality that there is no railroad link—nor interstate highway link—between the port and major U.S. and Canadian markets, including many that are not far away.

“The railroad here left just as the port started,” Gardner said. “They never had a chance to shake hands. Think of what would happen to Washington County, one of the poorest counties in America, if we could get new rail to Eastport.”

The Port Authority’s $100,000 rail study projected that a “new” rail connection would cost $55 million. That estimate was made nine years ago. What it would cost now—and who would foot the bill—remain unknowns, as Gardner well knows. He’s one of six full-time employees at the port authority. When cargo comes in or out, a Montreal-based company supplies the port with trucks and longshoremen that handle the heavy-lifting needed, with some cargo requiring as many as 80 short-term workers. The port authority also owns and operates four tugboats. Three big, one small.

What comes in? Not much. Think road salt and massive wind generator blades. What goes out? Not much by comparison to other ports. At least for now, Eastport’s recent Downeast cowboy era appears to be over.

For some years Eastport was a regular port of call to accommodate a transaction that shipped impregnated dairy cows from the U.S. to Turkey. It was a buy-one, get-one sort of arrangement among farmers. It required rounding up, sheltering, feeding, and dealing with the muck of hundreds of the pregnant bovines involved, both onshore and at sea. These were ladies who had been trucked to Washington County from points west, their job to march in place on the edge of town until the Turkish-bound vessel was tied up and ready to set out. No more.

“People don’t realize how what they see on TV news can impact their everyday lives, even here in Washington County,” Chris Gardner said. “Most of those dairy farms in Turkey where these cows were headed are on the border of Turkey and Syria.”

Four years of ongoing civil war in that hot-spot region have scuttled the pregnant cow deal. At least for now.

“We hope to return to that,” Gardner says. “We’re also looking the expand our (wood) chip exports. There is so much low-grade wood available in Maine, and Europe’s ‘go green’ initiative, especially in Germany, will require bio-fuels like low-grade wood.”

Gardner points out that coastal Washington County is one of the last remaining places in the world where, as he puts it, “the forest still touches the sea. And Maine is growing more trees than it’s cutting.”

The undeniable impact of climate change on the waters of the North Atlantic is never off Gardner’s radar. With melting icebergs, receding glaciers, and rapidly thawing tundra, the emergence of a new “marine highway” from Maine’s ports to the Far East and to U.S. ports on the West Coast is becoming more viable as a shorter and less-expensive alternative to the route through the Panama Canal. Load a cargo vessel in Eastport destined for Japan, and that crew and cargo is facing at least 10,000 nautical miles and 42 days at sea through the Panama Canal. Going around northern Canada, as global warming morphs the region into a viable merchant marine passage, is expected to offer huge reductions in mileage and time at sea.

“We’re moving in the right direction,” Gardner says. “It’s not easy and it’s not quick. But as changes to the Northwest Passage happen, we are positioned to do great things.” 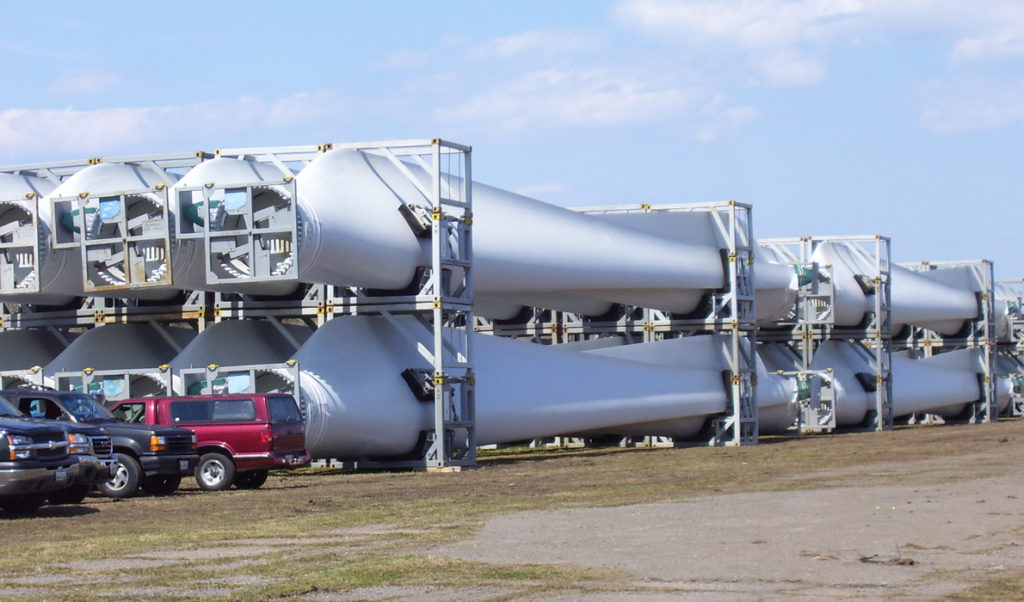 Wind turbine blades stacked at the Port of Eastport.