As Maine’s coastline changes hands, access to the shore becomes more contentious and litigious. Access is controversial, and this is especially true on islands. What happens when legal claims clash with local traditions?

While the Colonial Ordinance—the document on which current law is derived—allows for fishing, fowling and navigating in the intertidal zones, many towns have a long history of more extensive public use of paths, beaches, and flats. Local residents must be vigilant if public access to our shores is to be continued. Public education and participation are essential to the preservation of access to the woods and shores of our coastal communities.

For generations, folks on Chebeague Island have enjoyed the sand beaches, scrambled over the rocky shores, and walked through wooded paths. But that is beginning to change.

Many newcomers are able to pay big bucks to find the serenity offered by an isolated enclave. They have no interest in sharing in the island ethic.

We have heard stories of newcomers attempting to shut off access with signs, barricades, septic systems and fire pits. As recently as this summer, folks have been confronted as they accessed places their ancestors had frequented for generations.

Fortunately, other summer folks, whose roots run as deep as many of the year-rounders, encourage access.

For 260 years, island families have walked along the shores and through the woods of Chebeague with no thought that they might be trespassing. During the 19th century it was commonplace for islanders to build houses years before they had a deed to the land. They rarely considered creating rights-of-way to the shore because the paths they used were well trodden by their ancestors. Even the early rusticators, hotel visitors and cottagers enjoyed walking along the shore and through wooded paths that were synonymous with summer on Chebeague.

Chebeaguers thought the issue had been put to bed in the early 1900s when a seasonal resident refused to allow an island woman reach her home by a path used for more than a century. Islanders solved the problem when they petitioned the town to accept a road over the path, which made a statement that still resonates today. They realized that if they did not act and act quickly, places of community importance would be lost to all—except those folks who could afford to pay high prices for land and lawyers.

When challenges escalated in the 1980s, islanders began to research shore access and quickly discovered that every piece of property had its own history. Not all fit the Moody Beach model. They learned that deeds were being rewritten to extend to low water, but on careful examination found that lawyers and title insurance companies were also using language such as “subject to third party rights” and “rights in the shore, if any” to cover themselves.

In some cases, it was found that the shore and flats had either been retained or deeded to someone else and that so-called paper streets had been disregarded when property owners claimed land that had never been theirs in the first place.

Chebeague was then part of Cumberland and the town took aggressive action and reaffirmed its rights in five town roads. In addition, the town purchased three large shorefront properties through bargain sales, grants and donations.

During that process, the town discovered a private road that bisected two waterfront estates. In response, two civic-minded summer landowners donated a vehicular access easement to the town, even though it meant a parade of fishermen would drive by their homes at 4 a.m.!

Yes, community spirited people like this live on the Maine coast, and many are on Chebeague. Islanders and summer folks alike have granted conservation easements to the land trust, sold the town land in bargain sales, and created covenants that assure future generations will enjoy the magic of a walk along the shore or through the woods.

But despite this generosity, other people, who personally enjoy those special places preserved by others, attempt to block the town of Chebeague’s acceptance of paths near them. What motivates this behavior? Is it human nature or cultural differences?

Over the centuries, the people of Chebeague have come to expect that freedom of movement and use of the shore will continue in perpetuity, but questions concerning rights and use have been festering. Access to Chebeague’s trails and the shores may reach the boiling point over the next few months as islanders debate the future of the island’s “paper streets” and the underlying questions relating to freedom of movement on the island.

The time has come for Chebeaguers to become informed and willing to act if they want to continue and preserve their use of the island’s trails and shores.

Donna Miller Damon has deep roots on Chebeague and has served the island in many elected and volunteer positions for more than 40 years. She has worked to preserve coastal access on Chebeague since the 1980s. 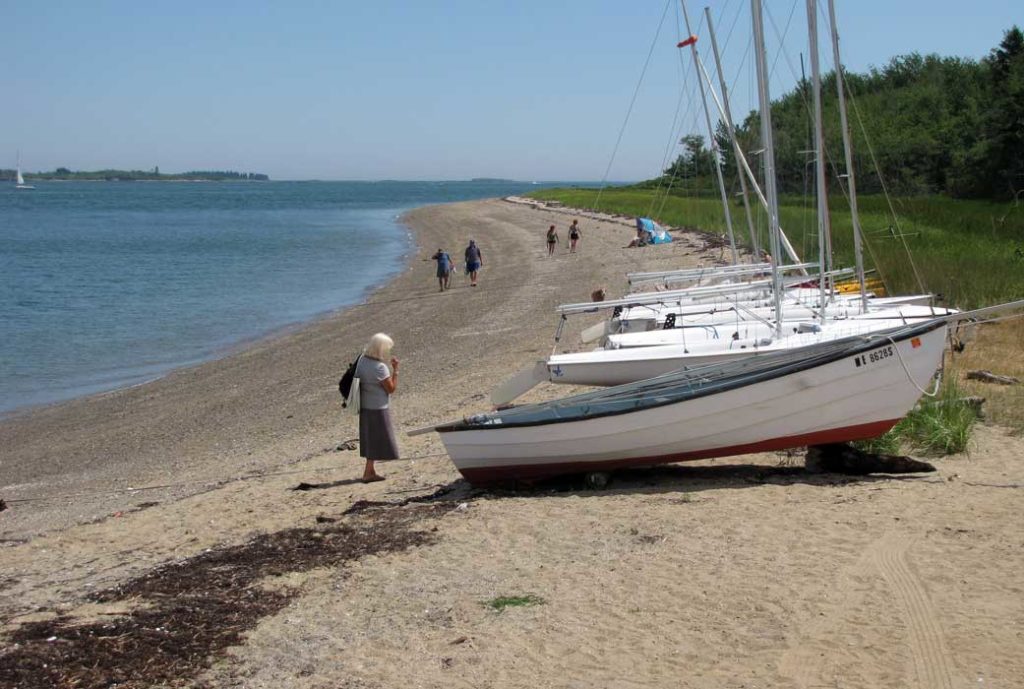