Let’s clear this up at the outset—Donna Damon never proclaimed herself to be “Public Servant One.” She does use that moniker in three different email addresses, and it might sound like she’s tooting her own horn, like a politician running for office.

The truth is her son, then in middle school, claimed the email address for her after Damon was out for several consecutive nights, tending to the town, school, library, recreation center, historical society and church business she’s immersed herself in for the last 30-plus years. It’s not clear whether son Thomas was griping or expressing his pride about Mom, but the tag stuck.

At the end of June, Damon, 65, will retire from Greely High School in Cumberland, where she works in a classroom helping students deemed average to above-average achieve their full academic potential.

“I tell them, ‘I’m either the biggest cheerleader or the meanest mother in Maine,'” she jokes, explaining her role as helper, booster, cajoler and taskmaster.

“I help students see their potential,” Damon continues. “Once they believe in themselves, I don’t have to do anything.”

She also will step down from serving as selectman on Chebeague, the Casco Bay island that is now an independent municipality, separating from Cumberland, thanks in part to Damon’s efforts. Before and during the secession, Damon served on the Cumberland Town Council, which further complicated a difficult process.

Secession talk began in 2005, the vote came the following year, and in 2007, Chebeague Island became a new town. The winter of 2006-2007 was dominated by work, as she and others developed ordinances, government structure, public safety and other institutions.

“It’s still a work in progress,” she says. When the island was part of Cumberland, “People just expected someone to take care of things.” Now, with the island running itself, “We have no one to blame but ourselves.”

She admits to growing a bit disillusioned.

“I’m burned out from town government,” she says, blaming the “Monday morning quarterbacking” from those outside town office, and the tendency of some to get the ear of a selectman to hear a pet peeve rather than use the proper channels.

Damon took a stab at state government, running unsuccessfully for the House of Representatives n 2006, but coming within 200 votes.

“The most exhausted I’ve ever been in my whole life was the day after Election Day,” she remembers.

Some of that directness was seen on Facebook when she announced her retirement:

“I am disappointed by the negativity in the community re: local government. I always thought it was thankless, but now some people are down right mean. Many people cannot see how today affects tomorrow or put aside their wishes for the common good…”

The island is central in her life. She was born there and, except for a few years living in Massachusetts after marrying husband Doug, has lived there ever since.

Greely High School also has been central in Damon’s life. Fifty-one years ago, she arrived at the school for freshman orientation. After graduating in 1968, she attended the University of Maine, earning a degree in 1972 and teaching social studies and English at Greely in the 1970s. After having her children—daughter Rachel also is an educator—she left full time teaching, but then began taking on long-term substitution jobs, and finally returned to Greely full time in recent years.

Damon offers a possible explanation for her drive to serve in so many community functions.

At about 14 years old, she recalls, she and a friend decided the island needed a library. “We went around and collected books,” she remembers, and displayed them on tables where people could peruse and borrow. Many of the books which she and her friend read were of the adolescent variety, in which the heroines were involved in all manner of activities.

“So maybe that’s where I got the idea that you had to join everything,” she says with a laugh.

Later, a library was formed on Chebeague, and Damon would serve on its board for many years.

The school has reflected the changes in education theory, she says, remembering the varnished wainscoting on the walls and transoms over the doors she saw as a student. When she returned as a teacher, “They had taken all the walls out,” leaving open classrooms.

Education theory is like a pendulum, she believes, swinging this way, then that. “If we could just take the best of each idea, instead of throwing out the baby with the bathwater.”

No one expects Damon to sit in a rocking chair, though. She plans to research and write a book on the island’s history, a subject she warms to several times in conversation.

One tidbit: The island’s conflicts with Cumberland didn’t start ten years ago. In the 1880s, islanders sued the town to have it build roads on Chebeague. Another choice bit: The Casco Bay Breeze newspaper in the early 20th century editorialized against fishermen waking up summer residents with their boat engines.

Damon’s father used to say, “‘We got the poor summer people, and Penobscot Bay and Frenchman’s Bay got the wealthy ones,'” she recounts. Teachers, bankers and other out-of-staters built summer cottages on Chebeague, creating what Damon calls “a fractured community” that persists today.

She cites a poem written 100 years ago by an islander, lamenting being an outsider on one’s home island.

“It was the other side of the story,” with lines about how “the poor cook broils while the visitors enjoy the cool woods.”

Even in her years there, “It’s become more gentrified. My kids will never be able to live on Chebeague.”

Along with the island history book, Damon will continue to lend her  efforts to ensuring coastal access, even as owners tighten their grip on the shore.

“I see it as being the most difficult issue since secession. Everybody wants their own piece of the world,” she says. “They all want to go to these places that other people have been generous about, but they don’t want anyone in their own backyard.”

And there will be painting (a new hobby) and quilting and gardening (old ones).

So as she prepares to downshift, it seems that Damon has earned the title Public Servant One. 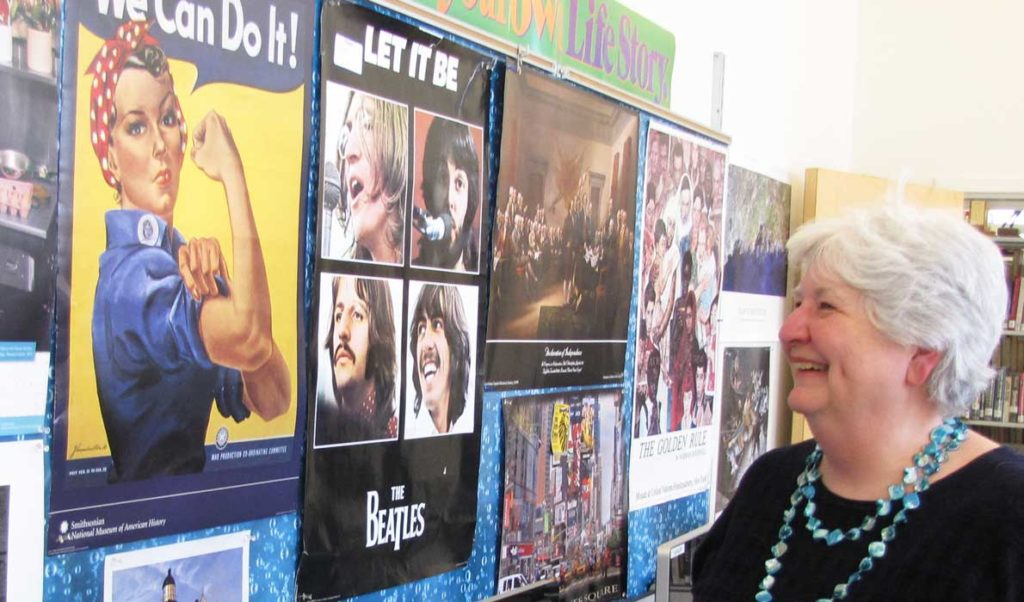 Donna Damon poses in front of a bulletin board in her classroom that reflects her life.