The parent company of the electric utility Emera Maine hopes to establish an undersea cable linking electricity generators in northern Maine, Newfoundland, Labrador and Nova Scotia with users in Massachusetts. The 350-mile-long cable would cross through the Gulf of Maine from Coleson Cove, just west of Saint John, New Brunswick, and make landfall in Massachusetts in either the Plymouth area south of Boston, or in the Lynn area, north of the city.

Emera Inc. will bid to provide the cable link, which is being sought by Massachusetts as part of a state-legislated mandate to bring some 1,200 megawatts of clean, renewable energy to users. Clean power is defined in the legislation as hydro, solar and land-based wind power.

A separate portion of the legislation calls for 1,600 megawatts of electricity to be generated through offshore wind turbines for Massachusetts users by 2027.

Gerald Weseen of Emera Inc. said the bidding period for the New Brunswick to Massachusetts cable—dubbed the Atlantic Link—opened in March and closes on July 27, and confirmed that his company plans on vying for the contract. Emera would not be among the firms generating the electricity. The undersea cable project is estimated to cost $2 billion, he said, and is expected to be in service by December 2022.

A map Emera uses to explain the project shows hydropower projects in Labrador linking with land-based wind power in Newfoundland, then transmitted to Nova Scotia via Emera’s “Maritime Link,” a 500-megawatt, 110-mile undersea cable that goes online this summer.

Land-based wind power in Nova Scotia, northern New Brunswick and northern Maine could contribute to the transmission, Weseen said, along with hydro power from New Brunswick.

“We think it makes a lot of sense,” he said of the initiative to connect renewable power with a high-demand market. Emera Inc. is reviewing proposals from land-based wind and hydro plants to provide electricity for the project.

The cable will be buried in a 3- to 5-foot-deep trench as it crosses the Gulf of Maine, Weseen said, using a “hydro plow,” a device that uses water jets to blow material off the bottom. In most instances, the debris then falls back over the cable, burying it.

“We’re looking for soft, muddy bottom,” he said, as the route is chosen. If burying is not an option in some areas, the cable will be laid into natural trenches or covered with rock or reinforced concrete.

Emera’s plan calls for two cables laid side by side, each with a circumference the approximate size of a two-liter soda bottle, he said. The cable will carry direct current, or DC electricity.

“It’s a very efficient way of moving high amounts of electricity over long distances,” Weseen said, and “is becoming the preferred mode for subsea cables.”

The route would be marked on navigation charts, he added.

“We have been meeting with (fish) harvesters in Maine, Massachusetts and New Brunswick,” Weseen said. “I was in Port Clyde, Orrs Island, Belfast,” he added, and plans to continue to meet with fishermen.

Two detailed surveys are underway for a potential route for the cable. A survey using a ship-towed sonar device is planned for 2018.

If Emera Inc. is the winning bidder, a host of regulatory hurdles must be cleared, including federal and provincial permits in Canada and federal and state approvals in the U.S. 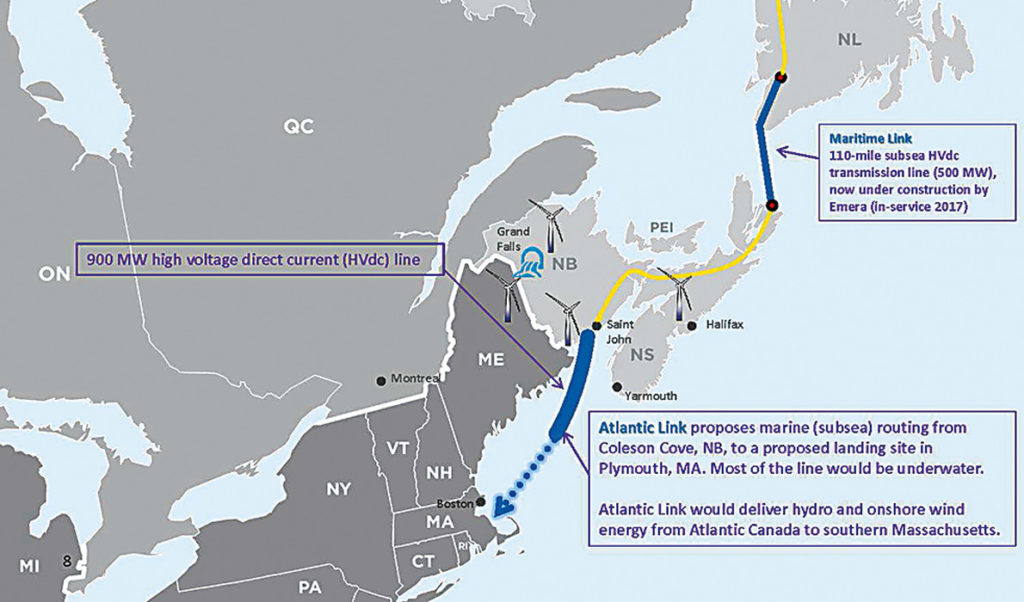