FRENCHBORO—Residents hoping to sustain a viable lobster fishing community are celebrating the implementation of a program that allows island fishermen to get fishing licenses more quickly than their mainland counterparts.

“It’s a wonderful program to sustain the island for generations to come, not just for us, but for others,” said Kim Smith of the state’s island limited-entry program, overseen by the Department of Marine Resources.

“This is our fifth year on the island, and we’ve watched it dwindle. We have seasonal retired people come out, people who own properties and come out in the summer. But to live here full-time, year-round, if you’re not the island teacher or involved, in some form, with lobstering, there’s no way to support yourself.”

Maine’s lobster fishery is divided into seven management zones. Six have a cap on the number of licenses that may be fished in each zone. These six have systems that allow new fishermen to enter the fishery only after a certain number of licenses are retired.

That leaves aspiring fishermen to languish for years on the waiting list for their chosen zone. For mainland fishermen, the slow turnover is a nuisance. But for a small island community, it could mean the end of a way of life. That’s why, in 2009, the state established an island-only limited-entry program, to allow islands to establish waiting lists separate from the general zone. For example, fishermen low on the general Zone B waiting list, which currently has 59 applicants, jump to a top spot on a much shorter island list.

That’s exactly what happened for Andy Smith, a long-time lobsterman. Andy and Kim Smith are transplants from Kittery Point, located in Zone G, the state’s westernmost management area. Andy’s Zone G license didn’t qualify him to fish in Zone B, the management area for Frenchboro, located on Long Island in Blue Hill Bay. Smith made do by joining adjacent Zone C, which welcomes all fishermen. But that meant traveling a distance from his home waters to set and haul his traps.

In early March, Frenchboro voted to implement the island entry system with a cap of 14 fishermen. There were nine existing fishermen, so that left open five spots. Smith and his stepson Zachery Ransom were Nos. 36 and 37 on the general Zone B list; given the list’s glacial turnover rate, that could have meant waiting a couple of decades. Now they were immediately eligible to get licenses as Frenchboro residents.

The program requires fishermen to live on the island a minimum of eight years; if they move before that time, they lose the license. After eight years, they can move and still retain the license.

The program is important not only from a personal standpoint, but for the community, residents said at a DMR hearing held while the proposal was being considered.

“The island is unique in that the only industry is lobster fishing, and keeping full-time fishermen in our waters is important to community stability,” said David Lunt, according to the DMR transcript. Lunt is a member of the island’s founding community and a license-holder for more than 40 years.

“Holding 14 island resident licenses could be a significant factor in allowing new fishermen and their families to make the move to Frenchboro,” Lunt said. “Frenchboro has been a vibrant fishing community for over a hundred years, but as the next generations grow and decide fishing is not the way of life for them, the fishing fleet has diminished. Without a course of action that allows new fishermen from other communities to move to the island and support their families, the year-round community could cease to exist in the not-too-distant future,” he said.

Others said loss of work would snowball.

“It’s not just about sustaining the waters and fishing,” said harbormaster Jay Fiandaca, according to the transcript. “If you are not a town, you don’t get grants. You don’t get your school. The ferry doesn’t get used enough. Once the ferry goes, [the community] will die.”

Folks here said they hope the program will help avoid that scenario. According to the 2010 census, the population was 61 people; that is estimated to be half or less today.

“Hopefully, we will work up our numbers,” said Kim Smith. 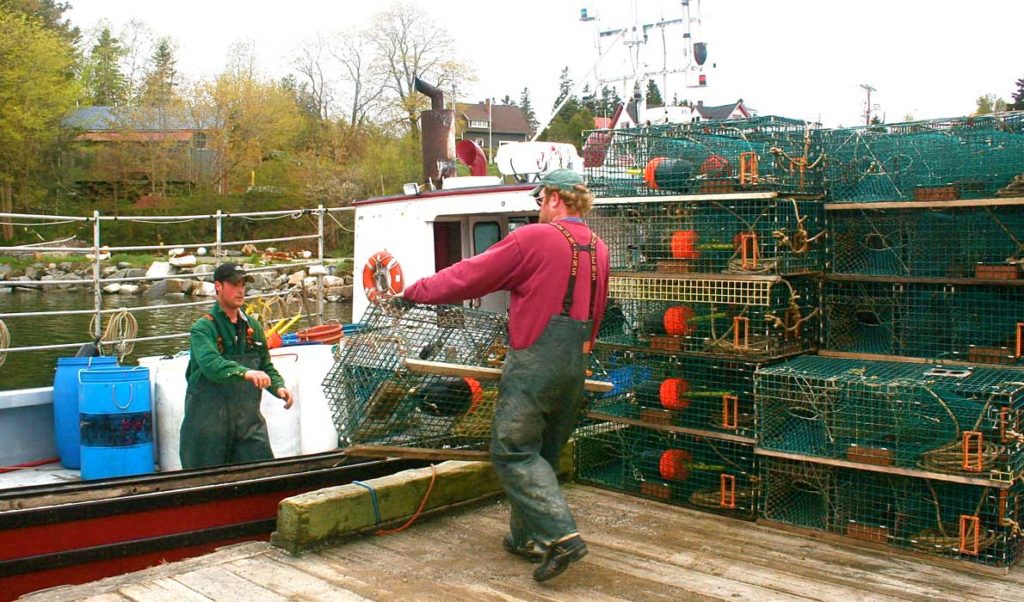