WOOLWICH – Peter Gallant didn’t grow up in a musical household in Lawrence, Mass., but the electrical designer remembers going into music stores and staring at the stringed instruments. There was a variety in how guitars looked, he noticed, but the violins all looked the same.

Today, Gallant, 57, is shaking up the violin industry not by changing their shape, but by crafting the instruments with nontraditional woods.

Gallant’s passion for violin making awakened one evening about a decade ago. He had several violins in various stages of creation and repair that had belonged to his deceased violin-making great uncle. The violins were nice, he thought, but the finish details were disappointing.

He had no experience making musical instruments and had done only a little woodworking so when he set about making his first violin, he read books on how to make them. He also was introduced to and mentored by Carleen Hutchins, a renowned acoustic researcher and creator of the violin octet (a family of eight instruments proportional in size and pitch) who died in 2009.

While his first violin —“a heavy old clunker”—was made with traditional woods—spruce and maple—it wasn’t long before he followed his heart and began creating eye-catching violins with nontraditional woods, such as mahogany, blood wood, purple heart, tiger maple and burlwood made from the camphor tree. 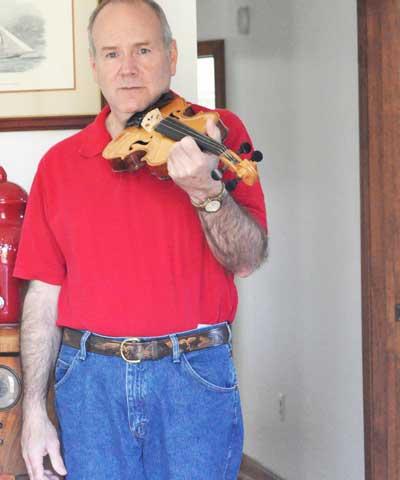 Peter Gallant with one of his violins. PHOTO: STEPHANIE BOUCHARD

The decision to make violins with nontraditional woods has meant Gallant has been largely shut out of the classical violin world. Most of Gallant’s customers are bluegrass and country and western players, he said – musicians who welcome the unusual and sometimes want to stand out.

“The violin world is an interesting one and a lot of people, I’m sure, disrespect the fact that he’s doing that [making violins with nontraditional woods],” said Ellen Carson, a violin player and teacher based in New Hampshire who introduced Gallant to Carleen Hutchins. “Just like with Carleen. Carleen put up with a lot of negativity from the violin-making world because she was trying new things. Unlike the guitar world or the mandolin world, the violin world is kind of closed off to trying different things and it really should be open because what Peter is doing. He has some very nice violins in different woods.”

But as unique as Gallant’s violins look, it’s the sound that ultimately wins players over. After hearing one of his mezzo violins played (and in a rare break into the classical violin world), the Juilliard School acquired it for concert soloist use. And bluegrass players have purchased them on the spot; Gallant would walk around bluegrass festivals, asking players to try them out.

What makes the sound of Gallant’s violins so special is his use of Hutchins’ technique of free-plate tuning—a process in which the back and front (the plates) of the violin are painstakingly refined through a series of sound tests and wood shaving before all the pieces are put together. The result is a sound that has more depth and volume than regular violins, Gallant said. It also produces a tonally balanced instrument.

Many violins may have great low tone or high tone, but the high and low strings don’t match balance each other well, Carson noted. This is not the case with Gallant’s violins. “All the strings match each other well,” she said.

Which is a wonderful attribute, said Melissa Bragdon Caron, 35, who grew up in Windham, trained as a classical violinist. These days, she plays more bluegrass as a member of the band Jerks of Grass than classical, and she teaches violin at 317 Main, a community arts center in Yarmouth.

“When you’re really digging in,” she said, “you want that growly sort of low sound, but it still has a nice high sound.”

She’s tested three of Gallant’s violins: one made with traditional maple and spruce, one of burlwood and the other of quilted bubinga (sometimes called African rosewood). “Fun to try and interesting looking and interesting sounding,” she said.

“Every once in a while you see something crazy,” like Gallant’s nontraditional wood violins, “but not very often and not around Maine. Around Maine, you have a lot of the traditional makers,” Caron said. “Peter—he’s definitely got something different and something cool going on.”

Learn more about Peter Gallant and his violins at www.precisionviolins.com 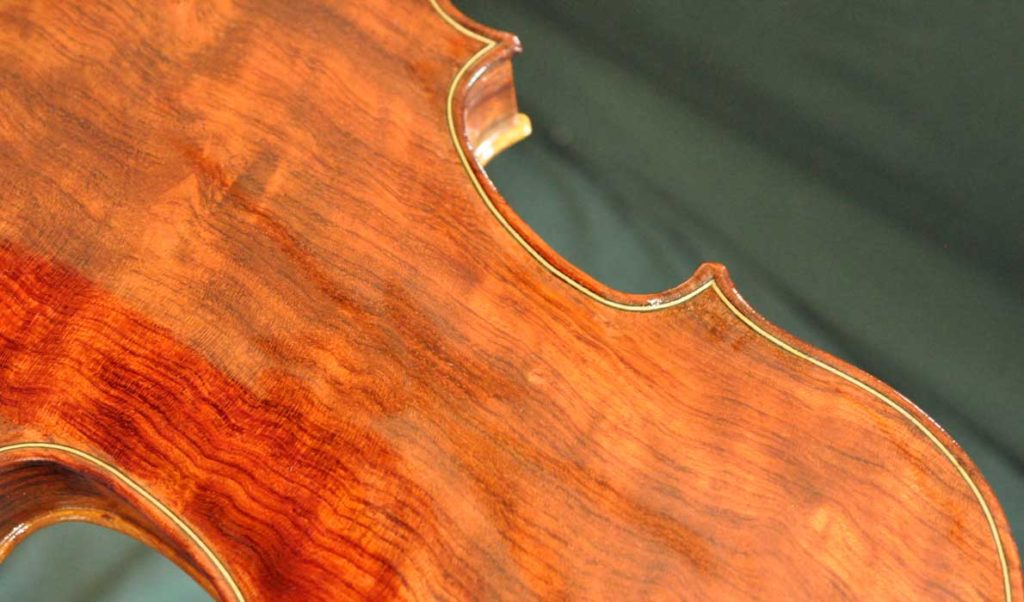