It was a dark and stormy night.

A blizzard was dumping several feet of sticky snow on North Haven, sometime in late 2008 or early 2009. I had gathered several friends at my house for dinner, including our new Island Institute fellow, and my plan was to make pizza.

The dough was mixed and rising in the warmth of the wood-heated kitchen. Tomato sauce was simmering, and vegetable toppings were arrayed colorfully on platters. The oven was preheating as high as I could crank it. I was just rolling out the first dough ball when—Bzzzt.

Appliances stopped their murmuring, the stove and microwave clocks beeped and were still. So were we, for a minute. Then we sprang into action.

Bill lit candles and found the flashlights. We found our old-fashioned rotary phone, which had been a housewarming present, and plugged it in (alas, this hack no longer works!).

I considered the cooking possibilities. The oven wouldn’t function without power, but the range would, as long as someone leaned in with a lighter to ignite the gas. Could I cook pizza on top of a stove?

I wasn’t sure, but I was game to try, and my hungry guests were excited to see what we could do, rather than venture out in the storm to their own dark houses. I oiled a cast-iron skillet and slid in a thin dough circle. As it bubbled and grew golden brown on the bottom I flipped it, then put sauce, cheese and toppings on the cooked side. I covered the pan with a pot lid, and the cheese melted and vegetables wilted in the steam.

I slid the finished pizza out onto a plate and it was immediately sliced and consumed. I cranked out pizza after pizza, with friends lining up to recommend toppings. Power outage pizza, crispy and greasy and good, was a surprise success.

The phone jangled, startling us all. Bill ran to get it.

It was the Island Institute fellow’s supervisor at the historical society, worrying about her in the storm. That she knew to call my house to find her gave me a warm glow, compounded by the pizza and the warmth of the friend-filled room.

North Haven still has that cozy glow in the best of winter times. Driving through town with the colored lights still twinkling, ice skating on the farm pond, or cheering “Let’s Go Hawks” with the whole town in the bleachers at a varsity Hawks basketball game, warms us all up when we need it the most. Here, not only will your friends check in on you in a blizzard, but they know just where to look. 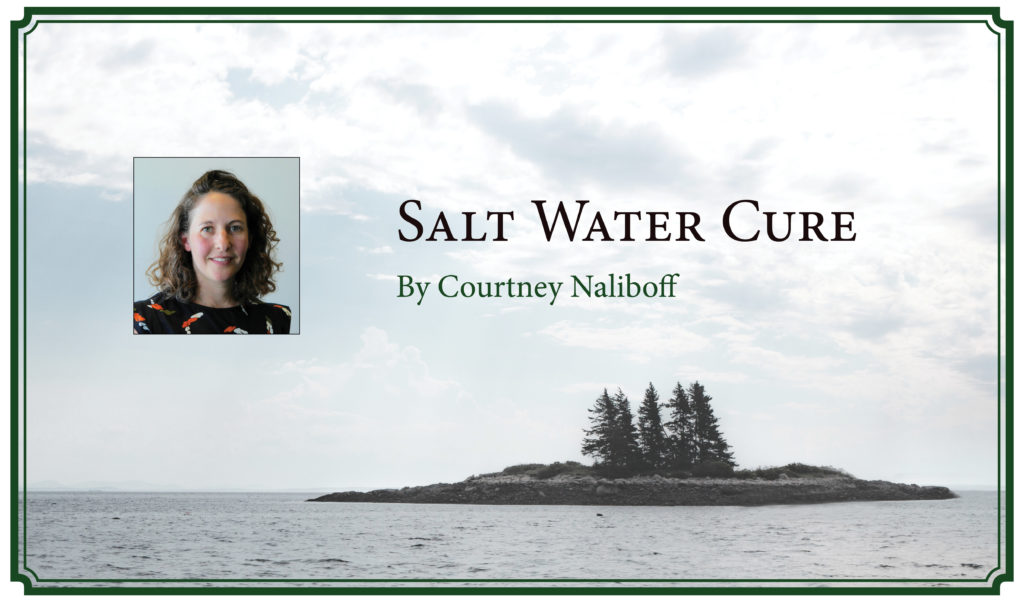