The study and collecting of postcards is called deltiology, a term coined by one Prof. Randall Rhoades of Ashland, Ohio, in 1945. Earl Brechlin, editor of the Mount Desert Islander, is one of Maine’s most esteemed deltiologists, amassing and interpreting many postcards over the past couple of decades.

And he has shared his passion for these travel mementos: Among his published collections are several in the “bygone” series, including Bygone Bar Harbor (2002), Bygone Coastal Maine (2004) and Bygone Backwoods Maine (2005).

For his latest venture into the annals of postcards—and just in time for the centennial of Acadia National Park—Brechlin has returned to Bar Harbor and more broadly to Mount Desert Island. He has chosen 118 images; aside from a handful from the Bar Harbor Historical Society and one from a private collection, they’re his.

The selection opens with a handsome panoramic view of Bar Harbor from Strawberry Hill. Brechlin explains Bar Harbor was called Eden until 1918. This earlier name inspired some snarky commentary from the authors of Picturesque America (1872):

“While possessing a charming lookout over the bay,” they wrote, “[the town] is without one feature of beauty,” adding, “The place is as conspicuously inexact in its cognomen as the island itself is; one wonders whether the notion of naming places by their contraries is a legitimate Down-East institution.”

Brechlin’s collection covers the waterfront, some of the grand hotels and summer “cottages,” churches and a casino, as well as the Bar Harbor Fire Department’s hose wagon drawn by two horses. The paragraph of historical background that accompanies each card offers interesting tidbits, such as the fact that canoeing was once among the most popular pastimes in Bar Harbor:

“In 1900, the town’s famous Canoe Club boasted more than 300 members and paddling lessons were sometimes taught by area Wabanaki.” Today, canoes have been replaced by cruise ships.

About a quarter of the collection consists of images of the rest of Mount Desert Island, including Somesville and Seal, Northeast, Southwest and Bass harbors. This reader was delighted to learn that Tremont got its name—a simplified version of trois montagnes—from the three mountains, Bernard, Mansell and Beech, visible from its harbor.

A lot of mansions and large hotels featured in the cards either were torn down or were burned to the ground in the 1947 fire. The book ends with a series of five images, all black and white, of that conflagration and its aftermath—a kind of macabre finale. (In October the Jackson Laboratory hosted a special gathering to commemorate the 69th anniversary of the fire and to celebrate the revival of Bar Harbor, Acadia National Park and the lab.)

One quibble: No credits are given for the postcard producers or photographers, which is something of a surprise considering how much is now known about the companies and individuals that traveled around Maine capturing the sights. Whether produced by Sherman’s in Bar Harbor or a local photographer like Luther Phillips, these cards offer a bit of time travel and historical perspective—and at their most memorable a small rectangular piece of art.

Brechlin is right: here is a “wonderful taste” of what this island looked like back in the day.

Carl Little writes about art, history, science and other subjects for several publications, including Island Journal. His latest book, co-authored with his brother David, is Art of Acadia. He lives on Mount Desert Island. 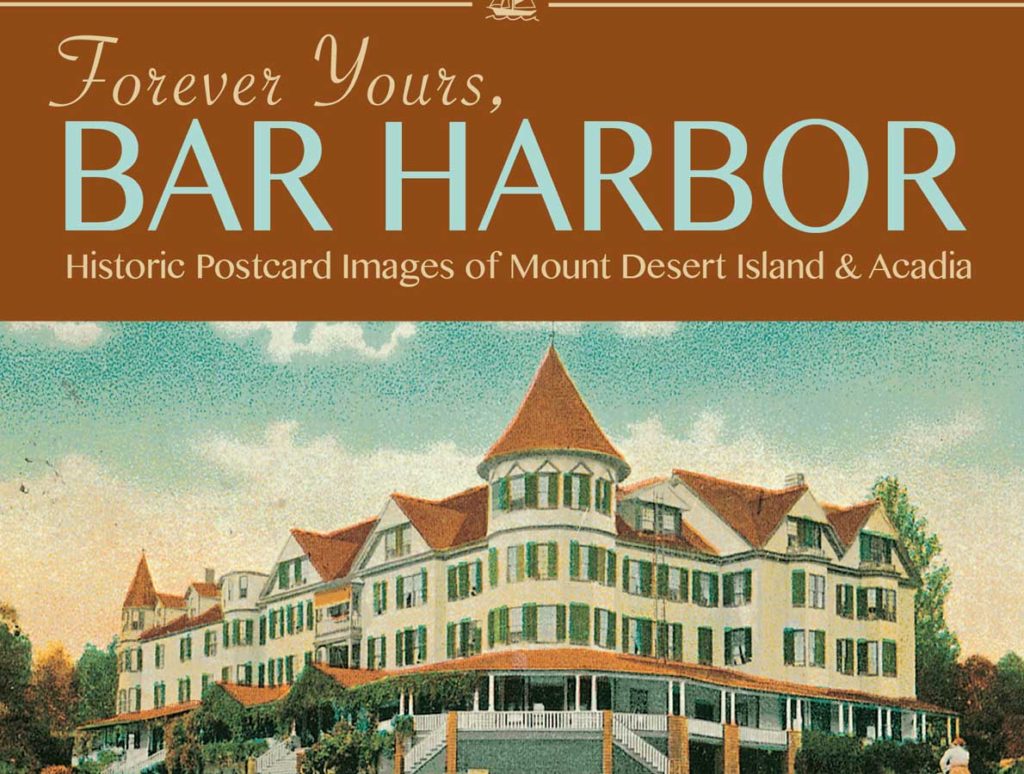