The tension between communities seeking to keep their waterfronts economically viable and the residents who want to preserve their views is one that is happening all over the world, say national development experts.

“I think that’s an inherent tension that won’t ever go away,” said Jon Golinger, a San Francisco-based attorney and waterfront advocate. “Once people see the waterfront they don’t want to lose it—that’s people who live there and also people who just want the opportunity to go there someday.”

An example of this tension is happening now in Portland, where a plan to redevelop a 10-acre site on the city’s eastern waterfront is evolving into a battle pitting residents against each other and against the local government and property developer.

SAVING THE SOUL OF PORTLAND

Earlier this summer, CPB2 won city approval, including a zoning change, to redevelop the site, which will include housing, offices and retail development with a marketplace described as being similar to Boston’s Faneuil Hall.

According to an economic impact study commissioned by CPB2, the project will grow the city’s tax base, add much-needed housing, create jobs, provide public access to the waterfront, preserve some of the property’s historic buildings and meet the goals of the city’s waterfront master plan, developed in 2008.

A group of residents opposed to the development formed a political action committee called Save the Soul of Portland in an effort to preserve the “much-beloved views of the working waterfront and harbor” they say will be “obliterated” if the proposed development goes through.

The group gathered enough signatures to put a referendum on the November ballot that would create a scenic views ordinance designating the areas the city considered worth preserving for their scenic value and areas where those vistas would be viewed.

The developer claims that if the referendum passes it will not only kill the Portland Co. Complex project but future “thoughtful” development.

Another group of Portland residents supporting the redevelopment project formed a political action committee called Portland’s Future. Its purpose is defeating the referendum, which it says “targets a great redevelopment project” and has “unintended consequences that will hurt every neighborhood in Portland” by “allowing any single person or small group of people to use unnecessary red tape to block or delay almost any project.”

To coastal communities that have seen this sort of thing before, the fight in Portland over this waterfront project may seem like an age-old one, but it’s really a phenomenon of the modern age. Until the mid-20th century, concerns about public access to the waterfront and water views did not exist, say national development experts.

For centuries, even though working waterfronts across the globe were the economic lifeblood of their communities, they were seen by most residents as places largely to be avoided. They were crowded commercial sites, frequently smelly, loud and dangerous. The neighborhoods abutting them were often rough-and-tumble, populated with bars and brothels.

But as maritime businesses around the world began disappearing by the mid-20th century, real estate developers, local governments and citizens began recognizing the attractiveness of their communities’ waterfronts for housing, recreational and entertainment opportunities and the enjoyment of the natural beauty of the water.

This recognition brought home the realization that the waterfront could continue to be the economic lifeblood of communities but now featuring recreational, residential and civic amenities.

“When [waterfronts] were industrial territories, there was not all that much public access,” said Alex Krieger, a professor of urban design at Harvard Graduate School of Design and author of Remaking the Urban Waterfront, “but our waterfronts now are more our front yards as opposed to our production yards. There is this greater expectation that we as citizens have access to them even though they’re being used for the same purpose in a way—for economic development.”

With this change in perspective—waterfronts as public front yards—was born the seemingly unresolvable dilemma experienced by waterfront communities today: The development projects themselves that make a waterfront economically viable are what residents are most worried about, said Krieger.

“One of the things they’re worried about now is ‘my access to the waterfront, my views, my desire to be able to use it as a public civic space,’” he said.

Because of this transformation in perspective, some residents believe they have a “right” to the water views along their waterfronts, but the truth is that water views are not protected, said Peter Hendee Brown, a Minneapolis-based urban development consultant and author of America’s Waterfront Revival: Port Authorities and Urban Redevelopment and How Real Estate Developers Think: Design, Profits, and Community.

“The idea of having a waterfront view anywhere in the world where there’s a working harbor didn’t exist until 40 or 50 years ago and now we all act like this has been around for a million years and we’re entitled to it,” he said.

The developers who buy the property have property rights and they don’t have to do what their neighbors want. Given that reality, Hendee Brown said, it behooves residents to work with rather than against developers who show themselves to be thoughtful.

The tension between residents concerned about their water views and the desire by local governments and developers to build on waterfronts may never be resolved, but development doesn’t have to equal disaster.

“There are certainly ways to accommodate new development without spoiling your view sheds or the coastal resources we want to see protected,” said Kenneth Walker, a Maryland-based program analyst for the National Oceanic and Atmospheric Administration’s (NOAA) Office for Coastal Management.

Communities that have had the most success in bridging their tensions and creating projects that satisfy to some extent all stakeholders do a lot of community engagement from which concerns can be voiced and addressed, he said, and thoughtful waterfront redevelopment plans created.

It also makes sense for communities to revisit those plans every few years, said waterfront advocate Jon Golinger, because the needs and values of residents change. “The process of updating and reviewing a waterfront plan, even if nothing changes, brings the spotlight on what people want,” he said, “and that’s a healthy thing.” 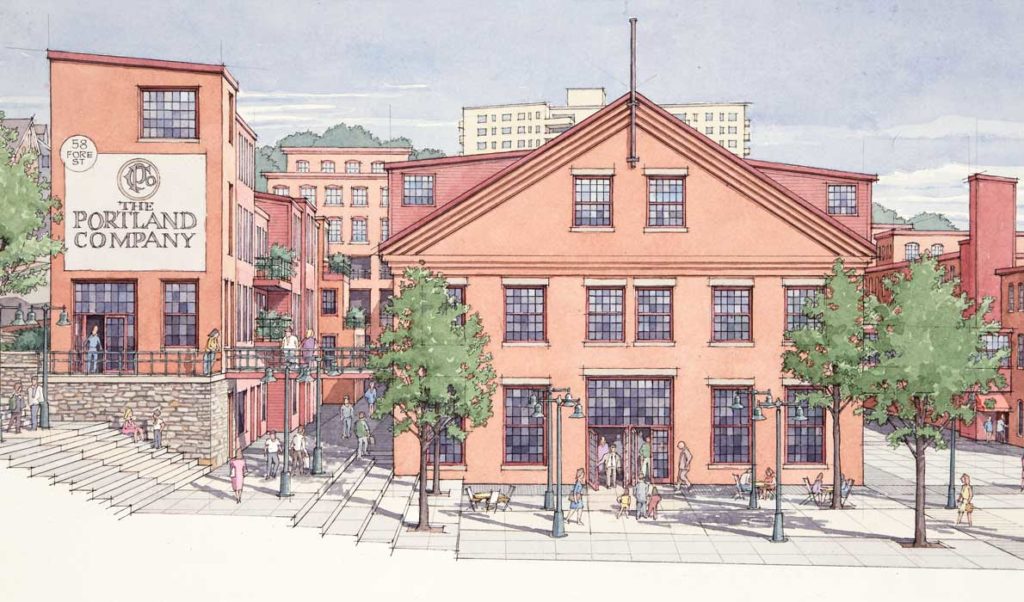 An artist's depiction of what the redevelopment of the Portland Co. site will look like.