Editor’s note: This is another response to the Rock Bound column in the April issue, “Will Portland choke on its success?”

“No one goes there anymore—it’s too crowded.” As someone who has lived on the coast of Maine most of my life, including living on Peaks Island as a child, being a co-owner of Eaton Island in East Penobscot Bay for 20 years as a middle-ager, and living six months of the year plus many winter weekends on Isle au Haut as an older person, I know exactly what that phrase means.

I am currently 71 and was born in Bath. I spent most of my school years and a lot of my adult life in Freeport, and worked some of my adult life in Portland. I was on the Freeport Planning Board in 1971-73 when we developed the zoning ordinance that has controlled much of the town’s growth. I helped many towns with parts or all of their comprehensive planning, most recently helping Stonington re-do its plan in 2017.

The big problems with many Maine coastal towns are that they are unable to support traffic and offer inadequate parking, and so are difficult to get into or out of at times.

These problems are what make me not want to re-visit towns I grew to love when I was younger. When I do go to these towns now, I choose my times carefully and use the local knowledge I developed to enter and leave through routes most tourists do not know or would not try.

You picked on Portland in your article, but the same problems occur to a lesser degree in a number of Maine coastal towns. However, whereas most Maine coastal towns have not grown much in terms of adding new floor space in the village areas over the years, Portland has been growing vertically as well as filling in empty lots.

With the exception of the Franklin Arterial, I-295, and Fore River Parkway, the street network is the same as in the late 1800s. In the 1960s and 1970s there were many surface parking lots, but now are gradually being replaced with mid-rise buildings, some of which provide parking for their own tenants and customers, but remove parking that used to be more generally available to all.

The city has a system of forcing cars parked on streets to be moved at least once a day by requiring parking on different sides of the street. The large, old houses on the East and West Ends have gone from single- or multi-generational family houses to multiple apartments, most of which require the tenants to park on the street.

Add to that the retail and restaurant boom that Portland has experienced, and the transient traffic and need for parking that brings, and you have a much greater demand than can be reasonably accommodated from May through December.

I worked on Exchange Street 1971-1974—Portland’s renaissance days.  I never had to park more than a few blocks away from where I worked. Now people who want to park for free and work in the Old Port have to get to the few free spaces by 7 a.m.

For the past five years, I have resigned myself to parking at a city-owned lot on Commercial Street and paying $10 a day if I want to do anything in the Old Port area, and I walk the mile each way to do it. My daughters will spend a half hour driving around, waiting for a street parking space to open up. I would rather be walking that half-hour instead of driving.

If you can even get a space in one of the downtown parking garages in summer, you will pay $20 minimum for a couple of hours and $40 for the day.

Getting in and out of Portland during commuting hours has become ridiculous in the summer, too.

For several years about ten years ago, I took a job down on Commercial Street and commuted from Freeport each day. When I worked there in 1971-1974, the commute from Freeport was about 20 minutes; now it’s a high-stress drive that had, on average, one accident a week that added another 15 to 30 minutes to the trip.

So, yes, I don’t go into Portland these days unless I really need to do so and I allow extra time to park and walk. The city has allowed itself to become difficult to get in and out of.  Planners have allowed development to gobble up cheaper parking spaces and replace it with uses that generate yet more traffic.

Without some major changes, the city is maxed out. We should realize that trying to build at higher and higher densities is going to be more and more costly, in more ways than one. 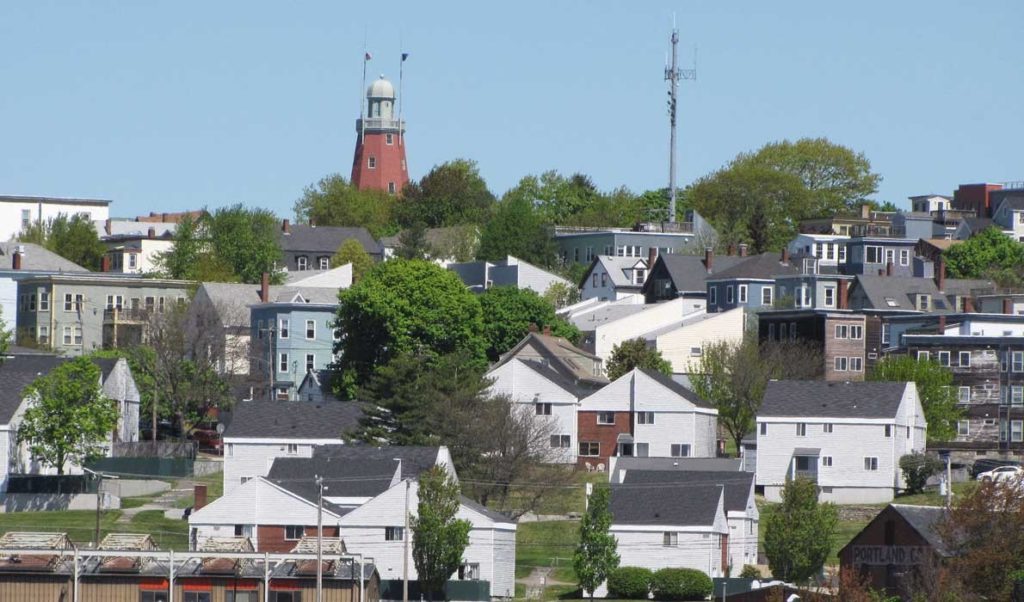