PORTLAND — One of the best business opportunities Maine has seen in years could begin with a single pallet-load of goods.

That opportunity is now available through Eimskip, the Icelandic company that in the last two years has established a shipping facility at the west end of Commercial Street. Eimskip (pronounced AIM-skip) has facilities across the world, and recently moved most of its U.S. operation to Portland.

What the company offers, says Patrick Arnold, whose company helps market the port facility, is direct container service to Europe. Such container shipping has not been available in Maine since the 1980s.

In addition to being an international shipping company that owns its ships and containers, Eimskip has extensive business networks throughout the world, Arnold and John Henshaw, executive director of the Maine Port Authority, said during a recent tour of the Portland facility. That means a Maine manufacturer has a better chance finding a market for goods.

“We’re leveraging Eimskips’s networks. This is more than transport,” Arnold said. “They are more interested in being your partner.”

The importance of accessing western and northern European markets cannot be overstated, Arnold argues. A Maine company could spend $2,000 to ship a truck load to the mid-Atlantic states, but for that same $2,000, it can ship a container—which can be loaded more heavily than a truck—to European ports like Hamburg, Germany and Rotterdam, Holland.

Some 300 million people live in the western and northern regions of Europe, Arnold said, a much larger potential market than mid-Atlantic U.S. states. Maine businesses looking to expand their markets should use sales reps in Stockholm, Hamburg, London and other European cities, he said.

So where does that single pallet come in?

Arnold said many companies will use what’s known as LTC, or less-than-a-container option, and join with other businesses to fill a single 40-foot container. So by including a pallet-load of a micro-brew beer, a specialty food, a hand-crafted tool or glassware, a Maine business can dip its toe into a very big market, risking very little money.

“We have direct access to some of the highest paying markets,” he said, which is the sales pitch he makes to businesses considering taking the plunge with Eimskip.

Currently, the port sees, on average, one Eimskip ship every two weeks.

“We’re hoping to increase that to weekly,” Henshaw said.

In its first year, Eimskip shipped about 5,000 containers out of Portland. As the numbers are tabulated for 2014, the total is expected to be higher.

Eimskip specializes in handling food and beverages, the men said, and the European market values higher quality food and drink products, and is willing to pay more for them. Eimskip’s containers, stacked on a pad that includes a grid of underground electric cables, can keep products at various temperatures. Lobster, fish and chocolate all keep best at different temperatures; during a tour of the facility, a gauges on a handful of stacked containers showed the internal temperature at 14 degrees Celsius, the ideal temperature for chocolate.

“Portland has a fish processing identity,” Henshaw said, and the ability to import fish for the city’s restaurants, or ship out local catch to new markets, is now more likely, with Eimskip’s presence.

“What we can offer is a distinct market where we have cultural affinity,” Henshaw said, referring to northern Europe.

The company also is able to ship products that don’t fit into containers. Henshaw said Maine-built boats are regularly loaded onto Eimskip vessels, bound for Europe, loaded into an open cradle-like container.

As recently as 2009, the port facility just adjacent to the Casco Bay Bridge was used by the city to store snow removed from streets, Henshaw said.

Thanks to bond and state Transportation Department money, the port facility is more than doubling its footprint.

“We just acquired 18 acres next door,” Henshaw said, and earthwork has begun there, just west of the bridge. The most important part of the expansion is to link the port with the railroad, which will be completed by summer.

The rail link will bring the third mode of transportation to the facility; an existing “drop and pick” area is designated on the current 13 acre footprint for trucks to pick up freight that comes by ship.

In an arrangement tied to customs considerations, some 60 percent to 70 percent of LL Bean’s products come to that part of the facility by truck—after first arriving by ship in New York. The freight actually doesn’t go through customs until it gets to Portland, Henshaw explained, allowing the company to get the products to Maine quicker.

Arnold shows a photo of the current site from the late 1800s or early 1900s in which about 25 rail sidings, on which freight cars are lined up, parallel to Commercial Street. Plans also call for a cold storage warehouse to be built on-site by a private developer.

“What we’re doing is rehabbing what was valuable here in the first place,” he said. “Portland has always had a nice geographic radius, with 60 million people living within about 375 miles, or “a day’s drive,” Arnold said.

Portland is also roughly equicenter to Halifax, Montreal and New York, Henshaw said, three key regional ports. It’s not likely that Portland will supplant any of the three, but it can serve an important niche role, the men said.

It’s not all about exports. The greater Portland area includes about 450,000 people, the men said, and increasingly, local businesses are buying goods that come by ship.

“The imports are what pay for the containers to come here,” Arnold said.

Time will tell if the ratio of import to export approaches parity, but Arnold and Henshaw believe both are critical to Maine’s prosperity.

This is the fourth in a series of stories exploring changing ocean uses that are the focus of the regional ocean planning process. For more information about Island Institute’s marine work, contact Marine Programs Director Nick Battista at nbattista@islandinstitute.org; for more information on regional ocean planning, contact John Weber at jweber@northeastoceancouncil.org. 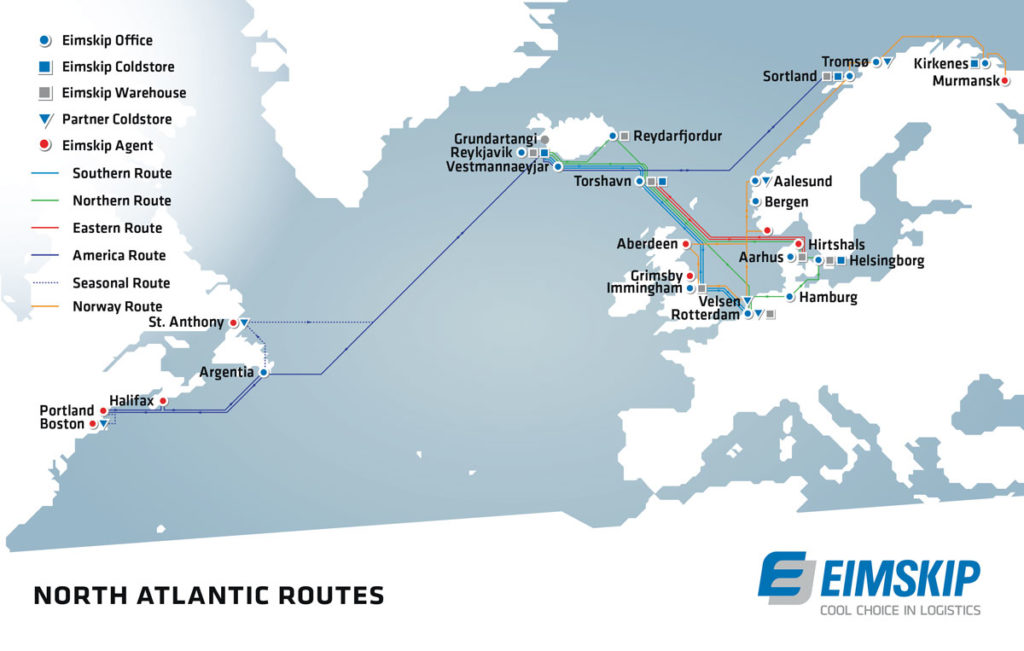 A map showing the ports at which Eimskip calls.