The Maine Port Authority and Icelandic shipping company Eimskip are collaborating on a new initiative to put Maine on the international map, one pallet-load at a time.

The initiative, launched in April, aims to remove obstacles for Maine businesses exploring international trade opportunities using Eimskip’s vast network. First Pallet Free offers free first-time shipping anywhere on the Eimskip network for local businesses to transport a 4-foot by 4-foot pallet, which can hold as much as 2,000 pounds of goods. Three Maine businesses have taken advantage of the opportunity since the program’s launch, one of which has grown significantly and is now paying to ship products internationally.

Port authority CEO Jon Nass acknowledges that taking shipping to an international market is a big step for many businesses.

“There are a lot of barriers. It’s hard to export things,” he concedes. “There are regulations, there’s cost, there’s risk. We’re taking one of those things off the table—the cost of shipping that product.”

The initiative, Nass believes, will help Maine businesses become competitive globally and have more options. The presence of Eimkip (pronounced AIM-skip) in Portland is key to those options. The Icelandic-based firm has

63 offices in 20 countries on four continents, from Vietnam, Japan, and Thailand to Lithuania, Poland, and Russia, and operates 22 vessels. Most of its shipping is in the North Atlantic, but the firm offers freight “forwarding” service elsewhere. 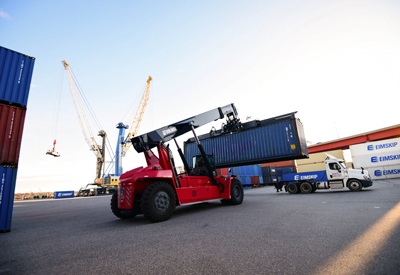 In Portland, Eimskip took over as the operator of the port in 2013. Monthly ship visits quickly evolved into weekly ships, sailing from Reykjavik, Iceland; to Argentia, Newfoundland; to Halifax, Nova Scotia; and to Portland, and back again—a ten-day journey one way.

“We got to weekly service several years ahead of schedule,” Nass said. “The fact that there’s a ship coming every week attracts bigger customers. It builds on itself. If you’re a company that ships every week or every month, you want to know that the option is going to be there.”

With a little help from Eimskip, the port of Portland has become a key player on the North Atlantic stage. In 2018, $460 million worth of products from 11 of Maine’s 16 counties moved through the port, including frozen blueberries from Washington County.

Portland is the first container stop for Eimskip to enter the U.S. market, with access to 60 million people within 375 miles—roughly a one-day truck drive, a standard industry measurement. This geographic area includes the cities of Quebec and Montreal, and the states of Massachusetts, New York, Connecticut, and New Jersey.

“Eimskip is the right size for the port we have,” Nass said. “They have a successful niche market that works well with the products we move in and out of here. It’s a great relationship. We would probably not be where we are without a company like Eimskip to prove that this can be done, and that a small port can be successful.”

In fact, Nass believes small ports are playing an increasing role in the shipping world.

“We’re proving the economics of smaller vessels, particularly between Portland and Halifax,” he said.

The Maine Port Authority collaborates with other organizations, such as the Maine International Trade Center and the Maine Regulatory Training and Ethics Center at the University of Southern Maine, to offer professional consulting services for start-up shipping endeavors.

“It’s altruistic to help small Maine businesses, but it’s also a business builder,” said Nass. “We’ll take the risk, and then if you’re wildly successful, we get to ship all sorts of your product and we’ll charge for that.”

The program shows the potential among North Atlantic markets.

First Pallet Free is not the first collaborative entrepreneurial endeavor for Eimskip.

“At one of our networking events, there was a brewer and there was a gentleman from Eimskip,” Nass said. “It was what I like to call the chocolate and peanut butter moment, where he said, ‘I have beer,’ and he said, ‘I have refrigerated containers.’ And they came up with this idea for marketing Maine beer overseas.”

Sean Sullivan, director of the Maine Brewers Guild, recalls the “crazy idea of retrofitting a shipping container with 78 beer taps on the side so we could ship and serve Maine beers around the world.” The moment of persuasion came, he remembers, “When Maine brewers found out it was cheaper to ship a container from Portland to Europe than it was to truck it from Portland to New York City.”

Since then, the guild has shipped and served Maine beers to Iceland, England, and Canada, and those countries have sent their products to Maine, helping cultivate a global exchange of beer.

“As an industry, Eimskip has helped Maine brewers realize that by working together and pushing geographic boundaries, business growth can be created for not only those who are exporting, but also for those who make their money by attracting people to Maine for experiences,” said Sullivan. 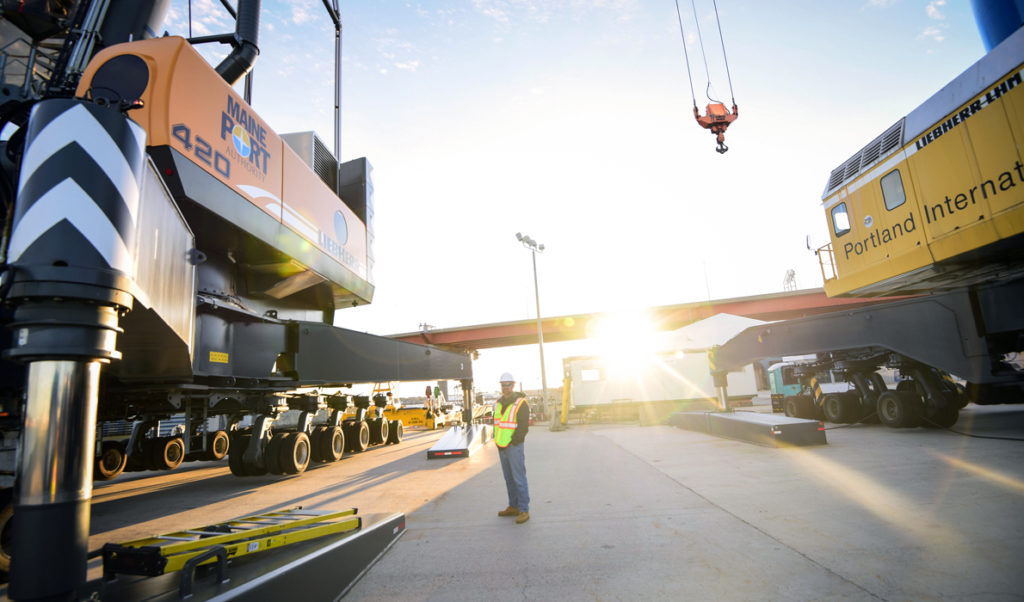