The much-anticipated Fore Points Marina on Portland’s East End opened for vessel docking in May. Due to various construction vagaries, berthing slips are opening in phases, said Vanessa Pike, the marina’s director of sales and marketing.

The west side of the marina, which is mostly for smaller, seasonal boaters, opened first, in mid-May, she said. As of early May, all the slips in the Peaks section of the marina for boats up to 25 feet, she said, have sold out for the season, and she already has a waiting list for those slips.

The middle portion of the marina is, at press time, scheduled to open around the first of June, with the mega-yacht slips opening shortly thereafter.

The marina is the first piece in a multiyear redevelopment of the former Portland Co. complex site along Fore Street.

The developer’s master plan of the 10-acre property includes a mix of living options, such as apartments and condominiums, with shopping, restaurants, hotel, office space, and communal outdoor space, according to the developer’s website for the project. No specific timeline for the redevelopment of the property is available.

The 150-slip marina can accommodate smaller boats (25 feet) to mega-yachts of “unlimited” length—more than 545 feet, and, especially once the rest of the property has been developed, offers a wide variety of amenities to boaters.

The need for more berthing space in Casco Bay has been an acute one. As Portland’s star has risen nationally as a great travel destination, there’s been an increasing demand for berthing space, and while Casco Bay is home to a number of marinas, they can’t keep up with that demand, said Stacey Keefer, the executive director of the Rockland-based Maine Marine Trades Association.

“I think it would be hard for me to imagine out of my 120 members,” which includes Fore Points Marina, “anyone who would say ‘Oh, this is a bad idea,’” she said.

Though members of the group are competitors, there seems to be enough business to go around.

“They’re all full to the max, many of them,” Keefer said.

Pike confirmed this, saying that she is already getting referrals from other marinas that are full.

While there was some initial residential resistance to the redevelopment of the Portland Co. complex due to concerns, in particular, around blocked views, the marina expansion is consistent with the “intense” development plans for the eastern waterfront generated beginning in the early 2000s, said Bill Needelman, Portland’s waterfront coordinator.

He said it will be interesting to see how the marina evolves and what impacts it has, but right now, “It’s hard to see a downside.”

“Adding 7,800 linear feet of berthing to Portland Harbor is going to be a great advantage to the support services for the marine industry,” he said.

This “significant expansion” should increase the amount of boating, the amount of visitation by the cruising public, and opportunities for commercial marine services operators and businesses that rely on tourism, such as the restaurants and retailers downtown, he noted. 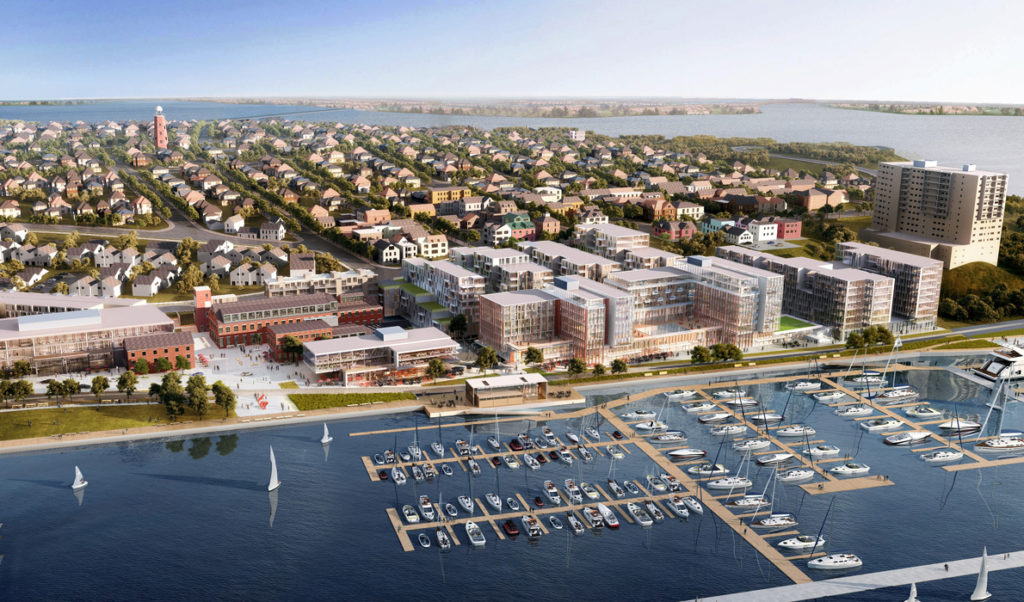 An artist’s rendering of the Fore Points Marina