PORTLAND — Mike Roylos is old enough to remember when offices, restaurants and other businesses featured strategically placed ashtrays. Though they were filthy and smelly, often holding a still-smoldering cigarette, they served a purpose.

Today, ashtrays are long gone. Smoking rates are down, and those who do smoke, must do so outside those offices and restaurants. You’ll see them, Roylos says, near the building door or ducking behind a wall, dodging the wind so they can light up.

And when they’re done? Typically, they crush out the butt on the sidewalk near that door.

“Smokers want to do the right thing,” he said, but they have few options for disposing of the spent cigarette.

A former three-packs-a-day man, Roylos has invented, or at least perfected, an ashtray for the times. The “Buttler,” as he dubs it, is becoming a fixture around downtown Portland. The innovation was prompted in part by government action.

The city passed an ordinance two years ago prohibiting tossing a cigarette butt on the ground or into a storm drain. Violators face a $100 fine. But still, the littering continues.

And it is littering, though many don’t see it that way. In fact, cigarette butts account for 38 percent of litter (by item) in the U.S., according to the group Keep America Beautiful.

Roylos, who owns and operates the Spartan Grill in Monument Square, also was affected by the city ordinance, which requires him and other business owners to keep cigarette butts 20 feet from their entrances. He dutifully swept them up each morning, but the number of butts was overwhelming and the chore became irritating.

“I was watching some of the bottle people,” Roylos recalled, those who collect redeemable cans and bottles they find on the street, when an idea was born. “Why not put a bounty on butts?” he asked.

Since he already put out the empty cans and bottles from the restaurant for those who collect them, he thought, why not offer a nickel for every cigarette butt someone brought in?

The idea was… well, too good. After a story about his offer appeared in the Portland Press-Herald, the following day, “All these people were lined up.”

Some 26,000 butts were brought in, many that had never hit the ground of Monument Square, or anywhere else. Never expecting that number, Roylos paid out $320, including offering those in the back of the line a flat $20 for their collection.

What did he do with the butts?
“Those I brought back to my house, much to my wife’s chagrin,” he said. “They were malodorous, to say the least.”

TO THE DRAWING BOARD

Roylos likes to tinker, and his son is a welder, so the two cooked up what they thought was a much better idea, creating a 3-foot-long section of 4-inch galvanized pipe, what he describes as “a bullet-proof ash tray.”

Thus, the “Sidewalk Buttler” was born, though it needed to evolve. Roylos and his son revamped the canister so it is now made of a section of PVC pipe about 30-inches long, a 2-1/2-inch section slid within a 3-inch section.

A plastic wrapper that fits around the pipe makes the Buttler resemble a giant cigarette. They are then mounted to street signposts and utility poles, and hang about shoulder height. Since they don’t reach to the ground, they don’t interfere with plowing or shoveling snow.

“Once they’re installed, they’re out of the way,” he said.

A video featuring Roylos explaining the device is on YouTube (search “Sidewalk Buttler”).

In late spring of 2014, Roylos contacted Sarah Lakeman, outreach coordinator for the Natural Resources Council of Maine, and with her help, “We built a little coalition,” Roylos said, to create demand for the Buttler. NRCM’s interest lay in keeping the 400 toxic chemicals found in cigarette filters out of the environment. Benzene and arsenic are among those chemicals, Lakeman said.

“These butts wash up on the beaches,” she added, where young children may put them in their mouths.

The city fire department often responds to trash can fires, inadvertently caused by still-hot cigarettes, or the bark mulch around trees at the curb will similarly be ignited. Tests showed the Buttler does allow such fires, Roylos said.

In October 2013, he set up eight or so around Monument Square and in front of bars, where smokers tended to congregate.

Initially, the business owners who purchased the devices, which sell for $60, would be responsible for emptying them, but most didn’t like doing that dirty work. Now, city residents who get aid contingent on doing work travel the downtown and empty the Buttlers. (The canisters are emptied into a “Footman,” continuing the servant metaphor.)

There are about 70 around Portland, many purchased by downtown a business booster group.

A key component of the initiative is the butt’s final destination. A New Jersey company, TerraCycle, accepts the waste and composts the unburned tobacco and paper and recycles the plastic in the filters into pellets used to make products like park benches and shipping pallets, Lakeman said.

Roylos hopes other cities in Maine and beyond will install Buttlers, and he has a plan to offer manufacturing and installation work to military veterans.

Other cities, including New Orleans, Vancouver and London, have launched similar clean-up-the-butts efforts. 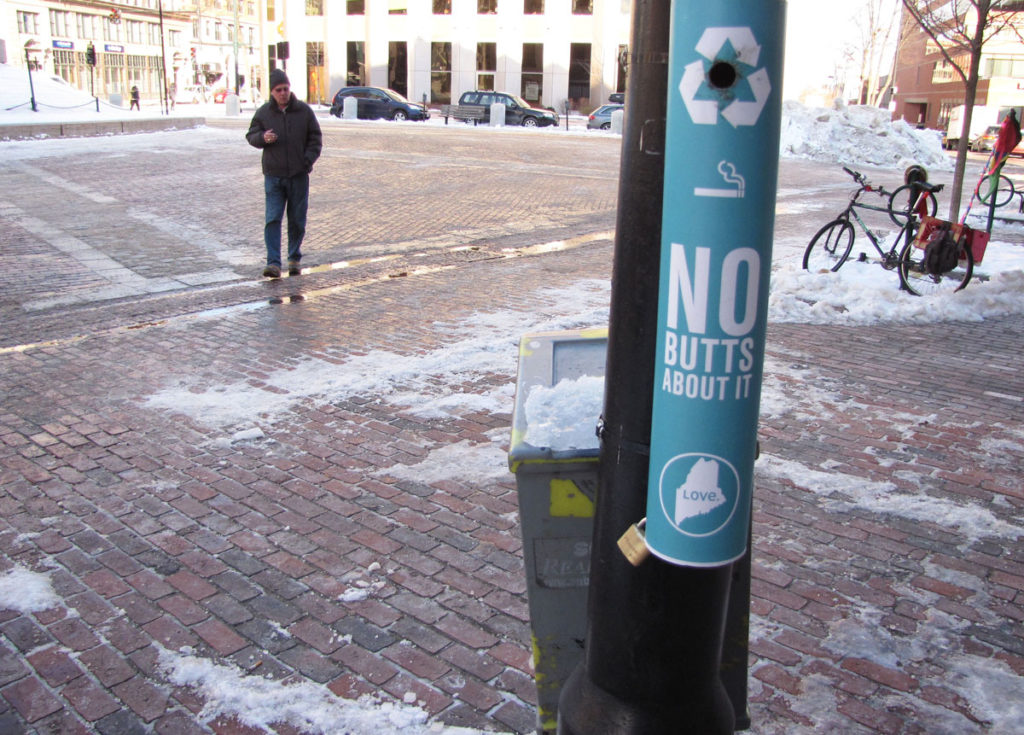 A smoker approaches the "Buttler" in Monument Square.