Maine’s role in the major party nomination process has come and gone, with the Democrats picking Bernie Sanders and the Republican faithful choosing Ted Cruz. The GOP frontrunner Donald Trump, who was endorsed by Gov. Paul LePage, had a predictably dismissive remark about Cruz’s victory, saying the Canadian-born Texas senator won because of Maine’s proximity to Canada.

While some presidential candidates try to burnish their anti-immigrant images, here in Maine, the state’s largest city is taking a different approach. The Portland Press Herald reports that the city council’s economic development committee is working toward creating a new office to help immigrants start businesses and enter the workforce.

“Both the city council and Mayor Ethan Strimling have made establishing an Office for New Americans a priority,” the paper reports. City Manager Jon Jennings said he plans to ask the council to approve $10,000 as part of next year’s budget to help establish the new office.

Fatface is the first American store in a British chain of apparel stores founded in 1988, the Forecaster papers reported.

Land of Treasure specializes in Burmese clothing, jewelry and handicrafts.

The state Department of Marine Resources has given Southwest Harbor lobster fisherman and scalloper Andy Mays its first-ever DMR Excellence Award. The honor recognizes those in the fishing industry who work with the department to ensure a sustainable future for the state’s fisheries.

Mays has served for more than 25 years on DMR advisory councils.

DMR Commission Pat Keliher said he has come to rely on May “for his informed, colorfully blunt and straightforward opinions and ideas. His advice and input is always a welcome and valuable contribution to the fisheries management process.”

The Mount Desert Islander reported that Mays was speechless when the honor was bestowed at the Main Fishermen’s Forum, but he later told the paper, “The DMR has recognized me for something I do really well, which is arguing with people.”

Residents of Islesboro rejected a proposal to allow a firearms deer hunt on the island at a special town meeting on Feb. 10. The vote was 84-42 against the proposal. The island allows hunting by bow and arrow only.

Incidents of Lyme disease remain high on the island, prompting concerns about the deer herd, but residents may have worried about a firearms season drawing too many hunters, who might have seen their chances of getting a buck as being akin to shooting fish in a barrel.

Anyone who has sat in a car at the traffic logjam that Route 1 in Wiscasset becomes in summer will be interested in the state Department of Transportation’s plans to improve traffic flow.

DOT released two design concepts, hoping to implement one by 2017. Wiscasset residents will vote on their preference in June. Both concepts call for traffic and pedestrian lights, the Lincoln County News reports.

“Sidewalk extensions, or bump-outs, would be created at the intersections to reduce pedestrian crossing times,” the story notes. “A new sidewalk would be constructed alongside Red’s Eats with bollards installed to separate customers from passing pedestrians.”

Parking also would be added near the bridge.

If there was enough ice this winter to support a shack and allow smelt fishing, we hope you got your fill. Some of the shacks on the lower stretches of the Kennebec River looked like they were headed for the bottom when we passed by in late February.

The York County Coast Star reports that smelting has been shut down through June 30 along the southern coast in an attempt to rebuild populations.

The shutdown covers the area from the New Hampshire border to Owls Head. Fishing in the Midcoast and Downeast coast is restricted but remains legal, the paper noted.

Scalloping also faces some shut downs. DMR is working on an emergency action that would close areas such as the Inner Machias Rotational Area, Wahoa/Jonesport Reach and Gouldsboro Bay and Dyers Bay. Casco Bay would close to draggers, but not divers.

The scalloping season began in December and is scheduled to close in April. Maine scallops were worth about $5.75 million last year.

A higher minimum wage has been an issue in both the national presidential race and in Maine, where voters may face a referendum question on the matter in November.

The Blue Hill Coop store, though, decided not to wait.

“Instead, it raised its own entry level starting wage from $9.50 to $11 per hour, plus a benefit package for full-time employees equaling $3 per hour,” according to The Weekly Packet.

Store manager Mark Deeny defended the move, saying: “It seems to me it breaks both ways for a small business. It’s a wise thing to do to attract good help and it’s also the right thing to do.”

This issue of The Working Waterfront was scheduled to be printed on St. Patrick’s Day, which has us thinking of beer. So a story in the Forecaster papers about the first New England Brew Summit, set for April 1 at the University of Southern Maine, caught our eye.

The event, organized by the Maine Brewers’ Guild and sponsored by Portland law firm Bernstein Shur, is a conference covering aspects of brewing, as well as the business challenges in the industry. 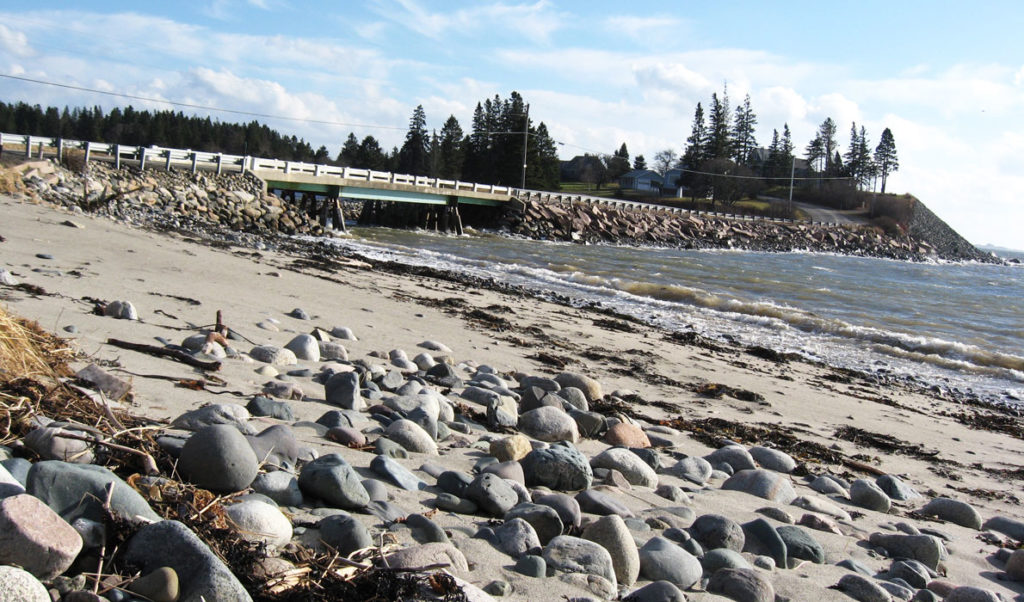 Waves break on the shore at Roque Bluffs