On a raw spring day at the beginning of May, a geotechnical team drilled into the ocean floor in the shallow waters just east of the U.S. Coast Guard station in South Portland. The team was getting borings to help determine if the site is appropriate for Maine’s first confined aquatic disposal cell, or CAD.

A thorough dredging of the private and municipal piers has not happened in decades, say city officials, leading to concerns that boats do not now, in some cases and for some boats, have the ability to tie up alongside the piers. As the sediment continues to build up over time, more berthing space constraints are expected, which could threaten the ability to maintain a working waterfront.

Dredging of the harbor’s piers has been put off for so long mostly because of cost. Earlier testing of the sediments around the piers indicates that the sediment that needs removing is too contaminated for open sea disposal, which leaves pier owners struggling to find an economically reasonable and environmentally safe solution.

Removal options include transporting the sediment over land to a landfill, with an estimated cost to pier owners of as much as $200 a cubic yard, according to the city of Portland. Or, the city can invest in installing a CAD cell in the ocean floor. The cost for disposing sediments in a CAD cell are an estimated $35 to $50 a cubic yard.

CAD cells have been used in other New England states—including in Boston and New Bedford, Massachusetts and Providence, Rhode Island—but the one being considered for Portland Harbor would be Maine’s first.

A confined aquatic disposal cell is a large hole dug into the sea floor designed with stable side slopes. No manmade materials are used to line or cap the cell, explains Bill Needelman, Portland’s waterfront coordinator. Contaminated sediment is put into the hole then capped with three feet of clean sand. The geotechnical boring taken in early May indicates that the sediments at the proposed cell site appear to be composed of stable marine clays.

The size of Portland’s potential CAD cell and the length of time it will remain uncapped is being investigated, Needelman said. Cell size, along with any material containment processes, such as silt curtaining, used when dredging and dumping the sediments, will be determined during the permitting process. However, the initial conceptual design is for a cell that can hold about 300,000 cubic yards of sediment, said Michael Johnson, a project manager at Stantec, the consultant firm working on the project and that conducted the geotechnical boring in early May. That’s an area of approximately seven to nine acres.

The Stantec team believes the cell will be uncapped for one to three years. The dredging is expected to take place during the winter months to minimize impact to lobsters, fishermen and recreation. Depending on pier owner participation, the team thinks dredging activities will take place over one or two winters. The cell will be capped six months to a year after the completion of placement of dredged materials into the cell, to allow those materials to settle.

The design of Portland’s proposed CAD cell will be based on similar projects elsewhere in New England, Johnson said. Those cells have been monitored over time and so far have remained stable.

The potential location for the cell in Portland Harbor is protected from strong currents and wave action. The CAD cell cap will be built below mean low water so materials will be deposited on top of the capped cell rather than shifted out of it by water motion. The Stantec team also does not expect seismic activity to have impact on the integrity of the cell.

Such strong assurances of the safety of CAD cells are cold comfort if something does go wrong and contaminants leak out, say Maine Lobstering Union members Greg Turner and Bill Coppersmith, both of whom are lobstermen fishing out of Portland Harbor and who have been part of the working group assembled for the dredging/CAD cell project.

“One of our biggest concerns is if something does happen and the lobsters are contaminated, it’s not going to be Portland Harbor or Casco Bay, it’s going to be from the New Hampshire border to the Canadian border,” said Turner, who has been lobstering for more than two decades. “Lobsters ain’t going to be worth nothing. No one’s going to want ‘em, even if it’s not true (that they’re contaminated),” he said.

“This is going to be the test to see if it does work in an area that’s clean and has a lot of species,” said Coppersmith. “People have worked hard to clean up Portland Harbor. They’ve done a good job. We don’t want to go backwards.”

Despite their concerns, lobstermen also understand that something has to be done to address the shallow berths. They, like other stakeholders who have taken part in the project’s working group, such as Ivy Frignoca of the Friends of Casco Bay, see the CAD cell option as “the least worst alternative.”

For the Friends of Casco Bay, the CAD cell/dredging project not only resolves the issues of increasing berthing space around the piers and high removal costs for pier owners, but the removal and containment of the contaminated sediment will help improve the water quality of the Fore River, Frignoca said.

“It solves a problem,” said Frignoca, who is the organization’s baykeeper. “We have to deal with the realities of an industrial past.”

Past testing of harbor sediment indicates contaminants primarily include polycyclic aromatic hydrocarbons and metals, said the city’s Needelman. As part of the permitting process, the sediments proposed for dredging will be tested for contaminants before being placed in the CAD cell. This testing is being paid for with a $350,000 brownfield grant to the Portland Harbor Commission from the U.S. Environmental Protection Agency.

How the CAD cell/dredging project will be funded remains to be seen, Needelman said.

“We’ll be looking for partners wherever we can find them.” Early estimates for the cost of the CAD cell alone are in the $10 million to $15 million range. The cost of dredging is additional.

Needelman hopes to have the testing done and environmental permits submitted by the end of this year. As for how long the project could take if it is greenlighted, he said the Army Corps of Engineers estimates two to 10 years based on the other New England projects. 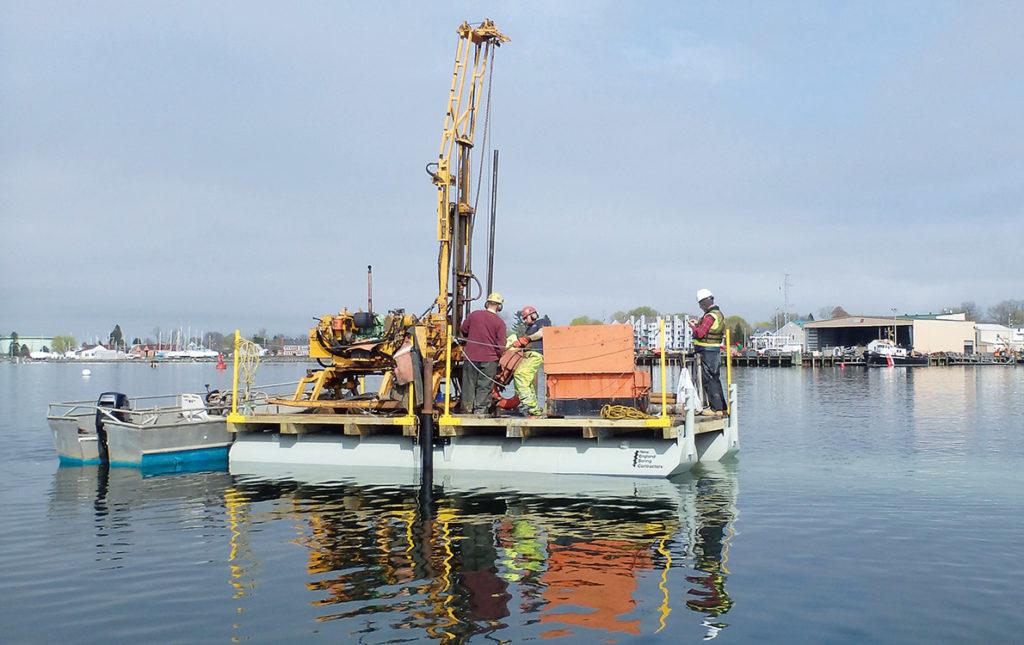