You don’t have to be an economist to understand a simple way to make Maine more prosperous: work to have more dollars coming into the state than leaving. But unfortunately, many state policy initiatives are not measured using this scale.

We have enjoyed one visible example of this principle over the last several months. Gas prices were as low as $1.75 a gallon earlier this year. For every dollar that fuel prices drop, $1 billion a year remains in our pockets, or at least remains in the state. Sure, local dealers see some of the money we spend on gas and heating oil, but most of it goes to the large corporations that extract and refine the petroleum.

Gov. Paul LePage repeatedly asserts that investing in natural gas lines along rivers to serve paper mills would boost those old-line companies. That’s true, but critics wonder about the return on the public cost. And though natural gas is a cleaner fuel than oil, it is produced beyond our borders.

As we publish this month, the legislature is debating changes to solar electric generation policy. More and more homeowners are seeing the wisdom of installing photovoltaic panels on their roofs. But utilities have begun to push back on the deal those homeowners get, which allows them to get kilowatt-for-kilowatt credit for what they produce (a house may produce more electricity in the summer than it can use, so the credits are applied in the winter). Utilities argue, with some merit, that the credit doesn’t take into account the cost of maintaining the grid, so the homeowner’s deal should be a little less sweet.

The legislature also is considering a bill to dramatically grow the amount of solar power in the state, offering generous price supports to encourage investment. The details are nuanced, and deserve debate, but again, for every kilowatt produced in Maine, dollars remain here and fuel the economy.

Lastly, there is one part of the economy that illustrates the benefits of the “import dollars, don’t export them” principle. Tourism continues to grow in Maine, but it doesn’t get the respect one might expect. Often, tourism was compared unfavorably with the forest products industry. Paper mills offered high-paying, year-round employment in large buildings. Tourism, on the other hand, is seasonal, and many of the jobs it creates are part-time and low-wage. But that’s changing. Hotel rooms in some coastal towns and on some islands go for $500 to $1,000 a night. Taxable restaurant and lodging sales for the eight coastal counties (York, Cumberland, Sagadahoc, Lincoln, Knox, Waldo, Hancock and Washington) totaled more than $2.3 billion in 2015. Not all of that spending is tourism-related, but tourists also buy gas, gifts, groceries, art and much more.

Mainers are part of the tourist economy; many of us travel on day or overnight trips, and our spending triggers economic activity. But those who come from out of state for multi-night stays, spend money and then leave are a clear example of the principle that should guide our policies. For every dollar spent on promoting Maine (in an increasingly competitive vacation marketplace), the return in tax revenue and economic activity is multi-fold.

State government must be reminded that while exporting lobster, aircraft parts, electronics and forest products is important, importing—or retaining—dollars is critical to our prosperity. 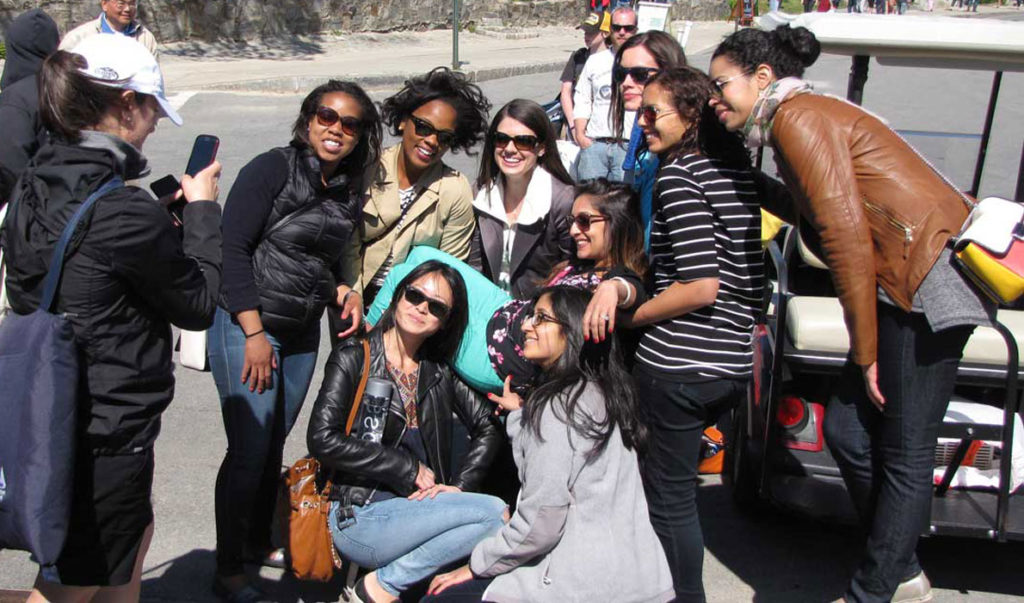 Friends pose for a photo on a visit to Peaks Island.