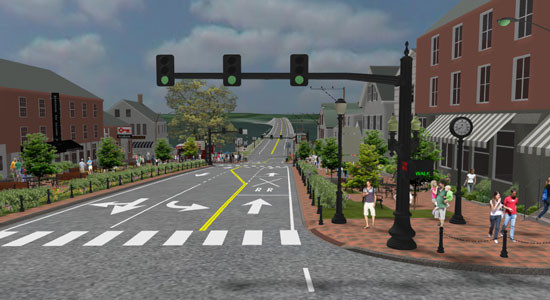 The view north on U.S. Route 1 in Wiscasset as interpreted with one of the options for improving traffic flow.

Proposals to deal with the perennial summer traffic delays on U.S. Route 1 through Wiscasset have been on the table—then off the table—for more than half a century. In March, six years after the most recent bypass proposal was shelved, the Maine Department of Transportation (DOT) presented the town with new proposals. Unlike the earlier plans, these are causing more excitement than angst.

DOT is offering two new design concepts. A bypass is not an option in either proposal. The bypass option would have caused major disruption to the region, including splitting Wiscasset in half, relocating businesses and residences, had significant environmental impacts and an estimated cost of over $100 million, said Gerry Audibert, an engineer and DOT’s lead on the Wiscasset project.

Residents will vote on the options in a nonbinding referendum in June.

“The thing to keep in mind is this is really a two-month problem with some shoulder season impacts. And granted, the delays are large, but it’s not a year round issue,” said Audibert. “So we were looking to see how much we could reduce those delays at an affordable cost.”

To that end, DOT is suggesting a number of improvements to what already exists.

The two options are similar. Both offer:

Option 1 results in an offset intersection at Route 1 and Water Street and has removable road posts running along the centerline to prohibit jaywalking. These bollards would be removed in winter so as not to interfere with snow plowing.

While many details have yet to be determined, DOT is estimating project costs at this early stage to be $4 million to $5 million versus the estimated $115 million for the bypass proposal of 2011, said Audibert. DOT says it will pay for all “reasonable” enhancements that are agreed on during the public design process, including purchasing one of the Coastal Enterprises buildings on Water Street, which are for sale. The purchased property would be converted into a 29-space parking lot with landscaping, benches and an informational kiosk.

In addition to these proposals, DOT is planning a number of other road improvements between the Woolwich town line and Edgecomb that are separate projects, all with the purpose of better managing traffic through the area and improving safety for pedestrians and motorists, said Audibert.

“One of the reasons why we’ve maintained a high level of interest [in Wiscasset] is the regional impacts those delays cause—not only to the town of Wiscasset but to adjoining communities, particularly north of Wiscasset,” Audibert said.

Since presenting the proposals to the public in March, officials have been hearing more positive reactions to the state’s offerings than negative.

“I definitely have heard a lot of enthusiasm,” said Ben Averill, Wiscasset’s planner. “As far as I’m aware, I haven’t heard really anything negative, which is great to hear.”

Averill is pleased with the proposals because both options address the town’s concerns of improving traffic flow and pedestrian safety. “Regardless of which option is the final option, I think that either improvement will significantly make downtown a better and more vibrant place,” he said.

“DOT’s proposals for village improvements are very exciting!” wrote Lucia Droby, volunteer organizer of the Wiscasset Art Walk, in an email. “Wider sidewalks will provide more performance space for Wiscasset Art Walk artists and will add a new graciousness to the village, which should be very welcoming to visitors,” she wrote.

“I see [the proposals] as a giant benefit for Wiscasset,” said Susan Robson, a floor manager at Sarah’s Café and active resident who serves as chairwoman of the town’s waterfront committee and as treasurer of Museum in the Streets.

“I do think there are lots of questions to be answered, but I think this is a great opportunity for the town to work together and create what we want,” she said.

Among those questions is the impact of removing storefront parking along Route 1. Traditionally, shoppers and business owners are protective of storefront parking, but many store owners in Wiscasset are supportive of the elimination of the parking spaces, said Averill, who has heard from some of them.

“They have a feeling that people would be more likely to walk around the area and visit their shops and other shops without the parking,” he said.

One of the shop owners with storefront parking is Kelley Belanger of In the Clover, an eco-friendly bath and body boutique at the corner of Route 1 and Middle Street. She says she is “definitely” in favor of removing the parking. “To me, the parking that is in front of the store is extremely dangerous,” she said. Pedestrians walk out into the road and drivers can’t see them, and cars backing out of those spaces into oncoming traffic is risky and contributes to traffic delays, she said. The options offered by DOT, she said, will make it safer for motorists and pedestrians and will bring in more people.

“I’m hoping as well we’re going to add benches and greenery and beautification here so it becomes a great little walking town,” she said. “That, to me, is very important.”

DOT plans on holding meetings with downtown merchants and the public before the referendum. If Wiscasset’s selectmen give the DOT the go-ahead on one of the options (a third option is to do nothing), then construction is likely to begin in late 2017 or early 2018, said the DOT’s Audibert. He expects construction would take two to three construction seasons (fall, spring, fall) for the project to be completed.

For details on the proposals and the public meeting schedule, go to www.maine.gov/mdot/projects/wiscasset/downtown/ 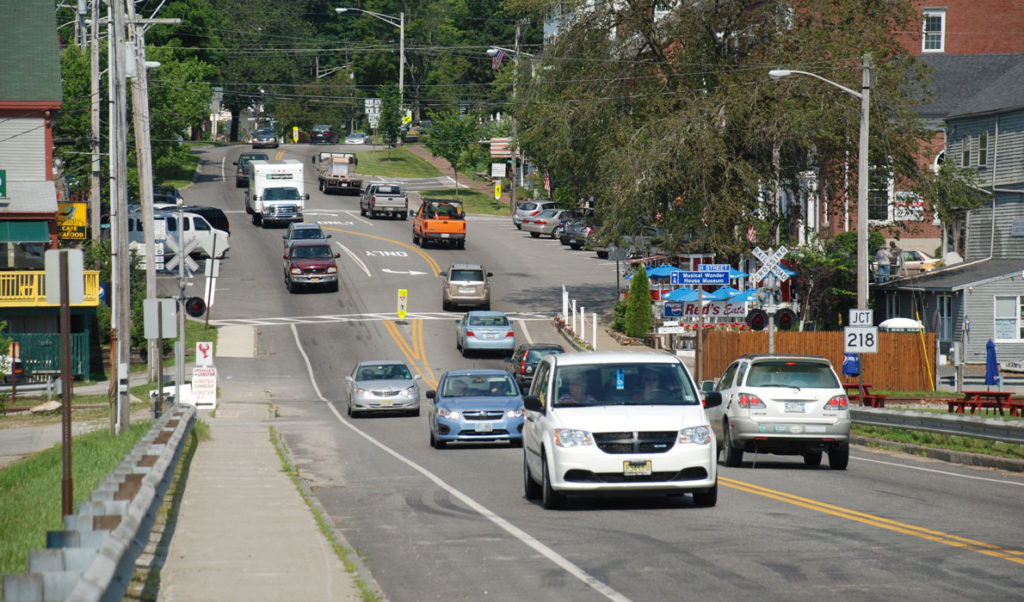 The view looking southward from the bridge in Wiscasset