If you ask a lobsterman if he works from a business plan, the response might be something like, “I’m trying to get through next week,” or “I take it year by year.” Some will say that they used to have one, but they stopped when the timing of the shed became so unpredictable.

Uncertainty created by climate change would seem to reinforce short-term thinking. The shed hit three weeks early in 2012 because of the warmest ocean temperatures ever recorded in the Gulf of Maine. Five million pounds of lobster went to market early that year, prices collapsed, and fishermen lost $50 million in earnings. Any business plans that fishermen had for 2012 collapsed over the course of a month.

Despite the increasingly unpredictable nature of the ocean, a panel discussion among fishermen at a recent forum on fisheries and climate change hosted by the Island Institute revealed longer-term thinking.

Gear is the shortest-term investment lobstermen make. Lobstermen view gear purchases as a rolling investment. All 800 traps will be replaced at roughly $100 each (fully rigged up) on a five- to six-year basis.

Electronics like radar and “bottom machines” can run $5,000 each and fishermen count on having to replace this equipment every seven to eight years. The engine will need to be replaced on a ten-year timetable.

Now place these practical investments against what fishermen believe the future holds for the lobster fishery.

It would seem that fishermen in their late 50s or older and who live northeast of Boothbay anticipate that they will be able to finish their careers lobstering. The guys in Casco Bay aren’t as certain. For them, it’s a matter of how far they want to chase lobsters. They could finish their career in the lobster fishery if they are willing to go offshore, a trend that is becoming standard among younger lobstermen in the bay.

Younger folks view the future with great uncertainty. They aren’t sure that the fishery will hold out at its current level of abundance for another 40 years. Some fishing Casco Bay already are taking action to diversify their fisheries incomes, buying permits for other fisheries and leasing space for shellfish aquaculture.

Younger fishermen in the Midcoast (and even in Stonington, the current record holder for being the highest volume-landing port) are in agreement. They aren’t sure the lobster fishery will be able to support their families for the next 40-50 years.

Those fishing along the Washington County coast see the population center for the species moving their way. This makes sense, since the center of the lobster fishery has moved 170 miles northeast since 1960 and it is still on the move. Fishermen Downeast see boom years ahead.

Nevertheless, for most of the Maine coast, fishermen are beginning to think about diversifying their businesses because of the unpredictability created by an increasingly warm and acidic ocean.

Fishermen are seeing squid and black cod in greater abundance and hope that these fisheries might help offset changes in the lobster fishery. Others are looking at diversifying into aquaculture. Kelp farming produces a harvestable crop within 1-2 years. Mussels take 2-3 years to grow to marketable size, while oyster aquaculture has a 4-5 year time frame.

Lobster fishermen have the advantage of owning a boat, wire-bending equipment and general knowledge of fisheries and fisheries management.

Perhaps most important, some fishermen might have the capital available to make investments right now that will diversify their family incomes five years from now and beyond.

The most successful fishermen have always adapted to change. As the ocean becomes more volatile, a diversified fisheries business plan will clearly benefit fishing families and those of us who value them as neighbors, stewards of the ocean and contributors to our local economy.

Rob Snyder is president of the Island Institute, publisher of The Working Waterfront. Follow Rob on Twitter: ProOutsider. 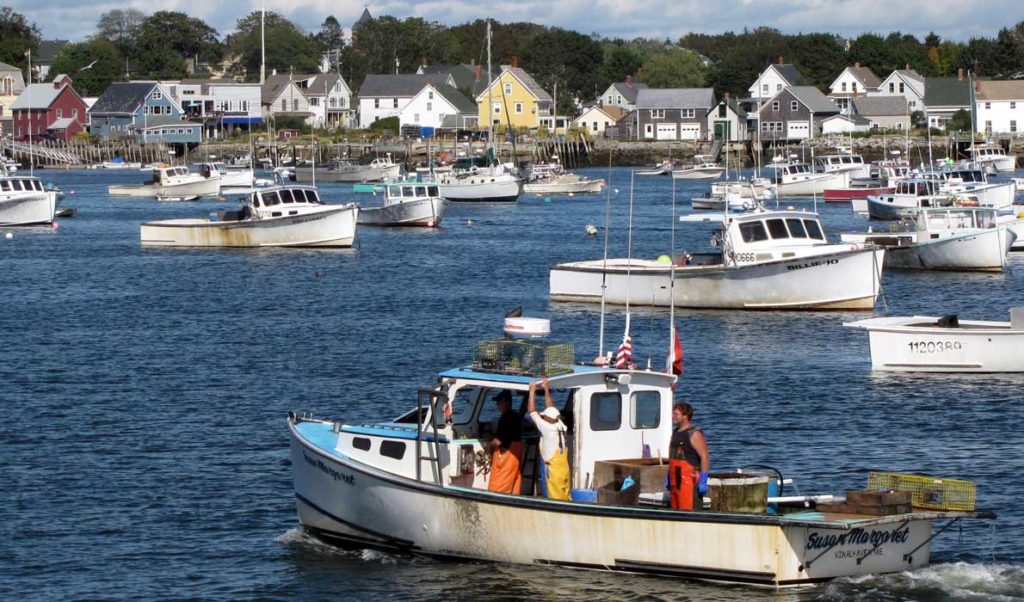