I started sailing as a youngster with my family in the 1960s. At that time, the only sewage disposal system in common use on boats was a marine toilet with a built-in pump that pulled in seawater and discharged the waste and water mix overboard. It seemed normal at the time.

As a teenager in 1970, I went sailing with a family that did not have an installed head, but used the “bucket and chuck-it” method. That seemed reasonable, too.

When I had my own sailboat as a young man in 1977, things were starting to change, although I was always careful about swimming in a crowded anchorage. The Environmental Protection Agency had issued regulations that prohibited direct overboard discharge of sewage from new boats in 1975, and from existing boats by January 1980. The old timers grumbled about how unnecessary that was!

On my 25-foot boat, I had a Porta-Pottie, which was completely legal.  Kind of gross to deal with, but good to have for guests. Still, I may have used the bucket and chuck-it method a few times prior to 1980.

There were some other options, but the most common waste disposal solution for boats was to continue to use the marine toilet, but add some plumbing and pump the waste into an onboard holding tank. Although most people wanted to comply, for a few years it was difficult to find a pump-out location. For the past 20 years or so, that has not been a problem.

One solution that is still legal today is to discharge sewage overboard if the vessel is over three miles from shore. That doesn’t seem like a big problem, unless the vessel is a cruise ship, but they supposedly don’t do that anymore.

Although it seemed like a big change at the time, prohibiting the discharge of toilet waste overboard certainly made harbors more pleasant for the environment and for water sports activities. Today, this kind of disposal would be unacceptable to most people, as far as I can tell.

Some men are still known to pee overboard, but even that is probably getting less common. Certainly in crowded harbors.

These changes to marine discharge regulations were a result of the 1972 Clean Water Act, which also provided federal funds to upgrade, rebuild, and build new wastewater treatment facilities all over the country.

Implementation of these requirements did take some time, however. After I moved to Peaks Island in 1981, I was quite surprised to find that the municipal sewer system, with about 180 houses and businesses connected, discharged into Casco Bay with no treatment of any kind.

The EPA process to obtain federal funding for sewage improvements required public meetings to review alternatives and costs. At one meeting I attended, a lobsterman announced that treatment was a particularly bad idea because “the best lobstering in the area is right around that discharge pipe.” I have no idea if that was true, but a new treatment plant became operational in 1993.

During the same time period, around 1990, the Maine Department of Environmental Protection had a program to identify “straight” discharge pipes of sewage from houses along the shores of all waterbodies, including islands. I know there were several straight pipes on Peaks Island, and they were common all along the coast, I’m sure. Those have all been eliminated, supposedly, and certainly most of them are gone.

Now, our environmental concerns have moved on to other problems, including storm water pollution, drinking water contamination from pharmaceuticals and personal care products, agricultural runoff, and hazardous industrial contamination, just to name a few. Oh yeah, there’s climate change from our huge emissions of carbon dioxide and other greenhouse gasses.

It can make one nostalgic for the old pollution problems we could more easily identify and correct. At least now the water quality in harbors appears to be cleaner than it was before 1980. We can enjoy that success as we figure out how to address the remaining, bigger problems.

Albert Presgraves and his wife Jenny Yasi built a passive solar house in 1989 on Peaks Island, where they raised their two daughters and went sailing in the summers. Now in Freeport, they run Whole Dog Camp for training dogs and educating about behavior science. Their sailing adventures since 2008 can be found at www.alpeaks.blogspot.com. 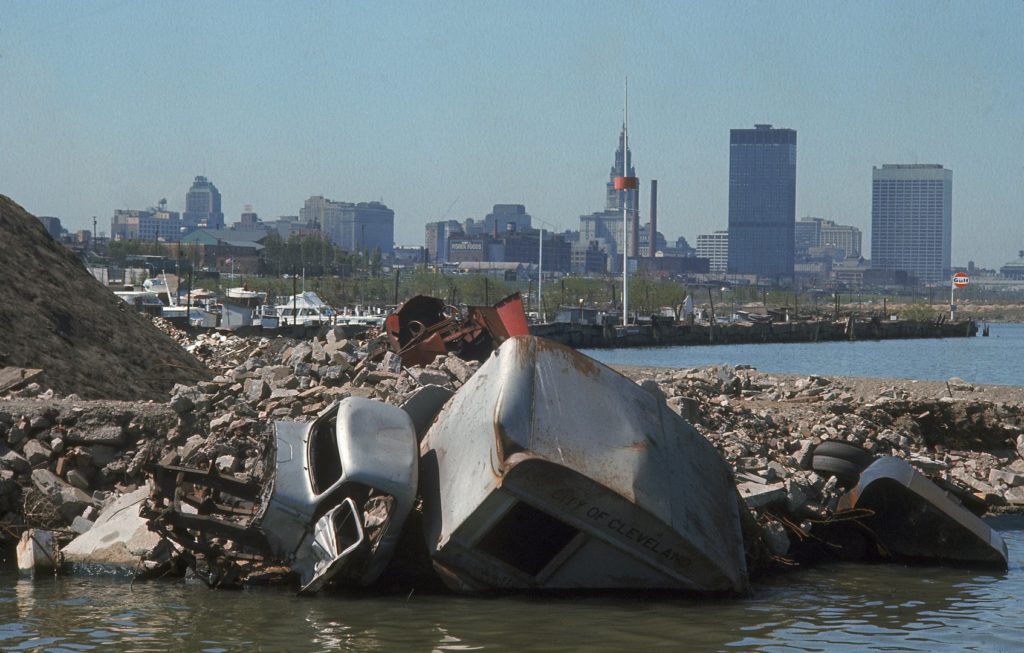