Life is rough in the intertidal zone.

Barnacles with their heads cemented to rock and pilings wait for the tide to rise so they can resume combing for plankton with their legs. Rockweed collapses on boulders and ledges at low tide and wafts upright at high. Crabs root around in it, scouring for mussels, algae, worms and, also, periwinkles, which are maybe the most conspicuous of the mobile intertidal denizens.

Periwinkles are easily spotted milling in super-slow motion on ledges and cobble, and along Maine’s coast there are three species of them: the common periwinkle (Littorina littorea); the rough periwinkle (L. saxatilis); and the smooth periwinkle (L. obtusata). They look similar at a glance—gastropods, a class of mollusks with spiral shells—but the common periwinkle is distinguished by a purple-brown shell, with fewer color variations than the others. The rough periwinkle’s shell has deeper ridges. And the smooth periwinkle tends to look shinier and is often banded and brighter-colored in green and yellow, with a flatter spiral at the end.

They move by shoving one foot out of the aperture in their shell (univalve, as opposed to bivalve such as those of clams and mussels), and when at rest they suction the aperture to flat surfaces. They scrape algae and bottom-dwelling diatoms off rock and seaweed for a living with a tooth-riddled contraption called a radula, which also sticks out of the aperture.

L. littorea, the common periwinkle, ranges most of the intertidal zone, while rough periwinkles tend to inhabit the upper part and smooth periwinkles the lower, according to Gulf of Maine Research Institute data sheets. Research out of the Shoals Marine Laboratory of Cornell University indicates the periwinkles avoid the subtidal area because Jonah crabs primarily live there, which hunt periwinkles successfully. Invasive green crabs also prey on periwinkles in the intertidal zone, crushing them in their claws, eating the soft body and discarding the shards. Not to mention herring gulls, red knots and, in deeper water, flounders and other fish.

Humans, of course, also prowl the shallows, flats and ledges, and some of them make a portion of their living gathering periwinkles.

In Washington County, where 90 percent of Maine’s periwinkle harvest takes place, they’re called “wrinklers.” They collect periwinkles from rock and seaweed by hand or by a 6-foot or smaller drag, which state regulations specify because of concerns in the last decade over the possibility of over-harvesting.

Timothy Sheehan, a co-owner of Gulf of Maine Inc., a seafood-buying company in Perry, said recently that his operation would buy about 2,000 pounds of periwinkles a day from wrinklers. Professional harvesters, he said, bring in 100 to 150 pounds in a day.

“But we also have people bringing in 20, 30, 40 pounds for pocket money,” he said, among them, “women, children, old people, Native Americans, Latinos.”

Sheehan said he has more or less suspended his periwinkle buying recently “because the markets are all over the place when it comes to pricing,” and he wants to devise a better framework so the harvesters “can get a regular, fair price year-round” for their work.

“I want to do right by the fishermen,” he said.

A commercial fishing license with a periwinkle permit is required to gather and sell periwinkles; 2 quarts are allowed for personal use. The state prohibits harvesting by SCUBA diving, as well as pump and suction devices, and undersize periwinkles must be returned to the spot they were collected. (You have undersize periwinkles when a random quart sample contains more than 220 individuals.)

The periwinkle fishery got seriously underway in the early 1980s in Maine and the Maritime provinces, according to the Invasive Species Compendium. Sheehan said he sells his periwinkles to markets in Boston, New York and New Jersey, and he’s explored marketing them directly to France but has yet to work out competitive pricing deals. Northeastern dealers ship periwinkles to Asia, Europe and elsewhere in North America, where they’re eaten in a variety of ways, and are usually called snails.

Maine Department of Marine Resources data indicate the biggest periwinkle harvest in Maine was in 1989 when nearly 3,827,560 whole pounds of periwinkles were reported collected and exported—though DMR says that figure may have been incorrectly estimated. In recent years, the harvest has ranged around or under 1 million whole pounds a year, with 741,554 whole pounds estimated to have been taken in 2015, at a value of $1.06 per pound, or $782,872 overall.

Common periwinkles, it turns out, are an invasive species. A study headed by University of Maine marine biologist Susan Brawley indicates that L. littorea probably arrived in North America from Europe sometime in the late 1700s or early 1800s. Analyzing detailed genetic studies and historical records, Brawley’s team concluded that L. littorea came to the Maritimes from Ireland and Scotland. Its presence was first noted near Pictou, Nova Scotia, in the 1840s, where it probably had arrived some years earlier on ballast rock picked up by ships in Britain and then discharged in Maritime waters. It may also have been deliberately transplanted from Europe for food, but Brawley’s team turned up no definitive evidence of this.

By the late 1800s, L. littorea was thriving along Maine’s coast and is now found from Labrador to Delaware, in addition to its original habitat in Northern Europe. The coast of Maine has felt effects. L. littorea competes with the native rough periwinkle and, some scientists believe, it tends to drive the rough periwinkle’s numbers down.

Since L. littorea reduces green algae populations by grazing, other species are affected, in turn influencing intertidal ecosystems. The common periwinkle has, for example, displaced the mud snail from mudflats, and it sometimes devours all the competitors of Irish moss, which then takes over in places.

“Rockweeds withstand periwinkle grazing, especially as adults,” Brawley said recently by email. “However, most macro-algal adults are eaten by periwinkles. I have speculated that our shores must have once had much more color on them—the filamentous green, brown, and red algae, as well as microscopic diatoms, etc., that L. littorea heavily grazes.

“I once tried to figure this out from paintings of the shore in the late 1800s/early 1900s,” she said, but the artists’ imagery is too impressionistic to count for reliable scientific information.

A fascinating fact of periwinkle natural history is that humming a tune to one can induce it to open its operculum, or aperture cover. Maybe life in the intertidal zone, though hazardous, is more civilized after all than the subtidal and deeper zones where the Jonah crabs patrol, the flounders await, and the periwinkles’ larger cousins the whelks are outright carnivorous. The bottom of the sea is cruel.

Dana Wilde lives in the Waldo County town of Troy. He has been a college professor, Fulbright scholar, editor, columnist and freelance writer. His latest book is Summer to Fall: Notes and Numina from the Maine Woods, available at book stores and online, from North Country Press. 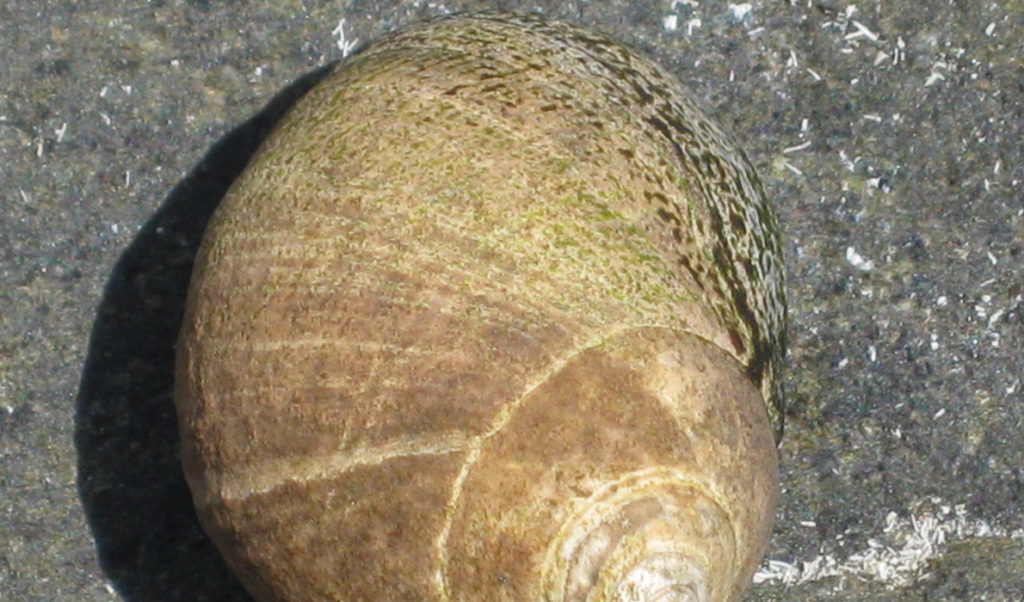