The Penobscot Marine Museum will host a free opening reception and preview of its “Where in the World?” and “Weather or Knot?” exhibits on Friday, May 24, 5-7 p.m. at its gallery at 40 East Main Street in Searsport. The museum opens for the 2019 season the following day.

“Where in the World?” features paintings of Maine cargo ships in foreign ports and the navigational charts that guided the way. Captains and owners commissioned paintings of their vessels as a point of pride to ensure a successful voyage. Today, these port paintings provide viewers with a tour of the ports as they looked in the early- to mid-1800s.

“Weather or Knot?” gives visitors a chance to imagine life at sea in calm and stormy seas. They can watch storm clouds slowly gather and waves and wind increase through a collection of paintings chosen to depict the 13 wind forces of the Beaufort Scale. Visitors will learn the importance of knot tying, the difference between vessels, as well as sail shapes, configurations, and rigging.

Both exhibits are sponsored by Diversified Communications with grant support from the Margaret E. Burnham Charitable Trust. 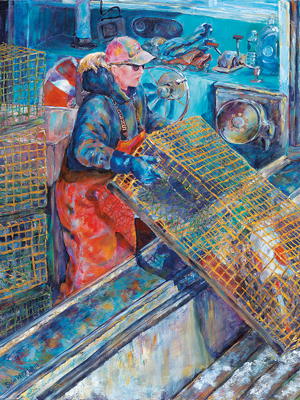 In “Lobstering Women of Maine,” Belfast artist Susan Tobey White captures the fishery through her brightly colored paintings of lobster women at work. The exhibit explores Maine’s lobstering traditions and heritage, and reveals the strength of women.

White portrays women from the coast and islands of Maine from Ogunquit to Stonington. “Lobstering Women of Maine” is sponsored by Hamilton Marine.

“Animal Tales” uses photographs from the museum’s extensive photography archives and the intriguing stories behind the images to explore the fascination people have with animals. Since the beginning of photography, people have enjoyed using their lens to forever capture beloved pets, livestock, wildlife, and fishing and hunting successes. The exhibit features a range of photographs from casual snapshots taken by amateur photographers, to carefully conceived photos taken by professional photographers like Kosti Ruohomaa. “Animal Tales”is sponsored by Sally Savage.

“From the Cradle to the Grave: Mining the Ed Coffin Collection” showcases 28 of the more than 2,500 photographs Ed Coffin collected throughout his lifetime. There are many themes to explore in the Coffin collection, but two that stand out as crowd pleasers are ship launches and ship wrecks. The “birth” and “death” of ships have long held the public’s fascination.

Most of Maine’s Midcoast towns have been involved in building boats, ships, and schooners. Watching the culmination of a year or more of construction and investment has been a spectacle not to be missed. On the flipside, the wreck of a ship evokes entirely different feelings, but the pull to see the tragic scene and to learn the grim story can be just as strong.

In “Scaling Up: The Canoa da Picada Plan Goes Full-Size,” João Bentes has recreated a workspace to traditionally loft, or scale up from a paper plan to a full-size work plan, the canoa da picada, a Portuguese sailing sardine carrier, in sections. Break the Anchor, a Portuguese nonprofit, is building it in collaboration with The Apprenticeshop in Rockland.

After construction, launch, and sea trials, the vessel will cross the Atlantic through the Azores, landing on Portuguese shores to establish a seamanship and boatbuilding apprentice-based school in Portugal using the vessel as an itinerant workshop. 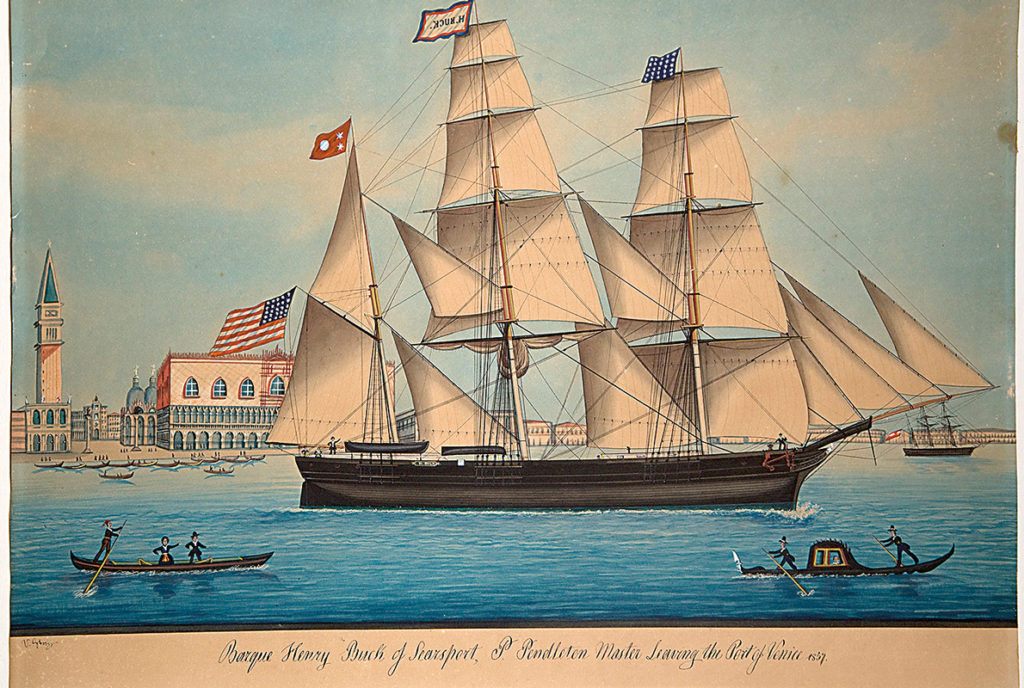