In the summer of 1951, Ruohomaa received a call from his friend Andrew Wyeth inviting him to join in fetching an antique hearse from Loud’s Island. Ruohomaa documented the infamous trip from start to finish. In this view, sawmill operator, Ralph Cline, ro

“Kosti Comes Home,” the title of a fine survey of photographs by Kosti Ruohomaa at the Penobscot Marine Museum in Searsport is a reference to the repatriation, as it were, of a major body of work by the acclaimed Finnish-American photojournalist who spent much of his too-short life (1913-1961) capturing Maine, its people and places.

Last year, the museum acquired the Ruohomaa archives from Black Star of New York, the agency that represented him for many years. Museum photo archivist Kevin Johnson has been reviewing the thousands of negatives and slides, contact sheets and vintage prints. This exhibition is the first fruit of the curating.

Deanna Bonner-Ganter subtitled her comprehensive 2016 biography of Ruohomaa “The Photographer Poet,” an apt description as he had a sensitive eye for subjects, be it a moonlit view of Pemaquid Light or a portrait of Aunt Carrie Maker, 92, knitting. Looking at his photograph of worm diggers wearing head lamps raking the mud at Cod Cove in Wiscasset in 1958, and some lines from Richard Eberhart’s poem “The Clam Diggers and Diggers of Sea Worms” come to mind:

I watch the heavy scene,

Of torso, arm, leg and rake

As seeing a dark core

And somber purpose of life,

The exhibition reminds us of Ruohomaa’s close working relationship with the writer Lew Dietz (1907-1997). They often teamed up on magazine assignments, Lew to write the article, Kosti to take the pictures; they might have been the model for the pairing arrangement often used by the Salt Institute for Documentary Studies.

The Penobscot Marine Museum show includes several photos that accompanied Dietz articles, including a dramatic you-are-there view of the deck of the trawler Quincy in heavy seas on the Grand Banks. The photo illustrated Dietz’s “The Toughest Bonanza in Fishing” in True, the Man’s Magazine in 1957.

One is also reminded of Ruohomaa’s friendship with Andrew Wyeth. The painter appears in several prints, including a photo of sawmill operator Ralph Cline rowing him to shore after an “infamous” trip to retrieve an antique hearse from Loud’s Island in Muscongus Bay. In another photo Wyeth sits in a room of the derelict house of Revolutionary figure Christian Hoffsees in South Waldoboro. The artist holds a portable easel in his lap. Ruohomaa might have been channeling his friend’s aesthetic in framing the picture. 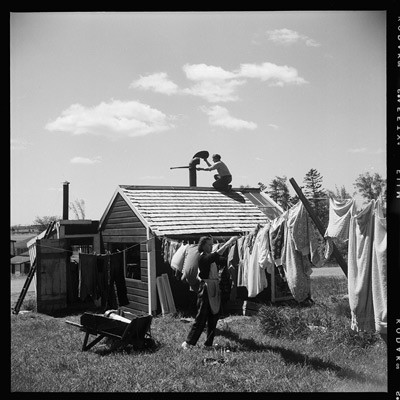 One of Ruohomaa’s most celebrated photo essays appeared in the February 1959 National Geographic. In an otherwise full-color edition, his black-and-white images accompanied William P. E. Graves’s “Maine’s Lobster Island, Monhegan.” Two of the shots are in the show: a fisherman returning to the island harbor with the sun at his back, and a grinning lobsterman holding a four-pounder. Apparently, after documenting the opening of the lobster season on Monhegan, Ruohomaa realized he hadn’t actually photographed the focus of the story and so returned to get the candid of the crustacean.

Ruohomaa eventually started shooting in color, and there are a couple of examples in the museum show, including a photo of a load of red fish spilling out into the fish pen of the trawler Quincy. Obviously, the bright yellow of a fisherman’s slicker would not stand out in a black-and-white print, but the colorization, if you will, seems less effective in capturing the drama of the scene.

Ruohomaa specialized in people shots and there are many memorable ones here, from a somewhat amusing close-up of a mooring diver wearing his mask to an in-your-face shot of Charles Beal, of Beal’s Island, at a tense lobster price meeting in Rockland in 1958. The show also features one of his classic laundry line shots: a woman pinning clothes while her husband fixes the chimney pipe of their humble home. Here, Ruohomaa composed a Maine classic.

Carl Little’s Paintings of Portland, co-authored with his brother David, is forthcoming from Down East Books. 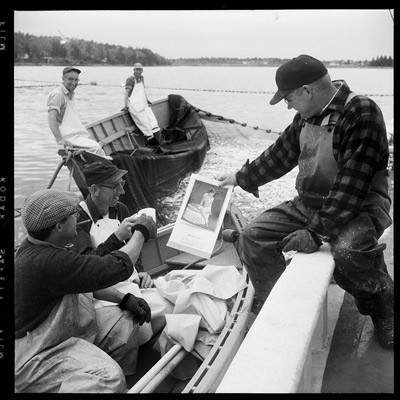 Herring fishermen take a break from pursing up a seine to ogle a pinup calendar. Herring or “Maine Sardines” were typically caught in weirs located near shore, or in seines, then transferred to a carrier for the trip to the canneries. Ruohomaa documented 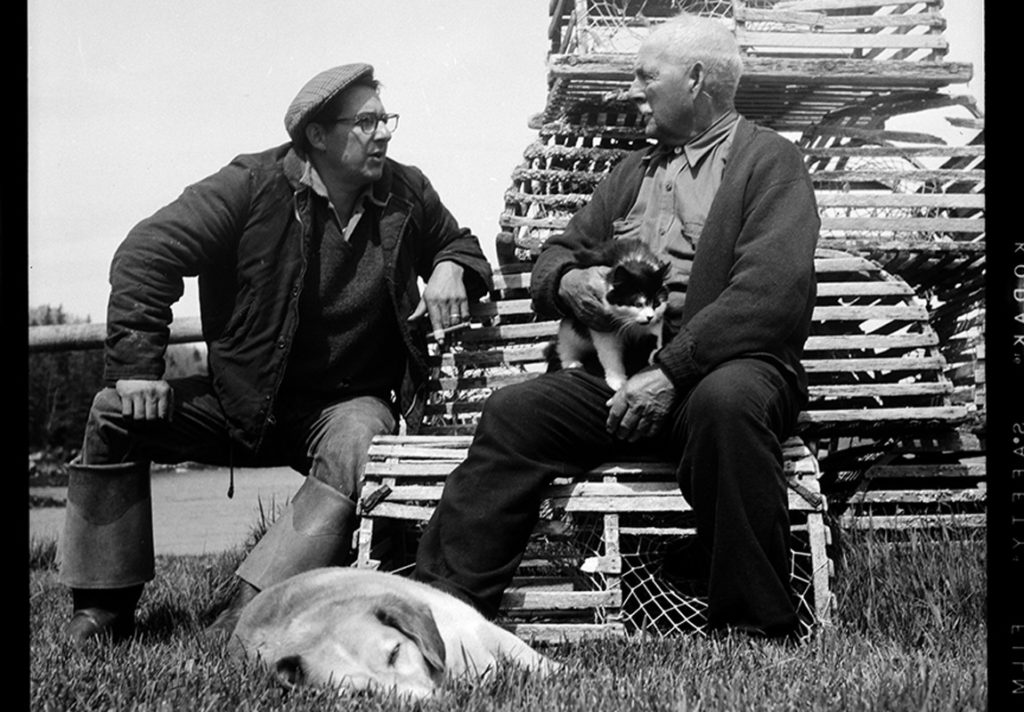