She’d said earlier on this chilly late March day that people often stop her on the ferry to ask about the effort she is helping coordinate to weatherize 100 homes on the island. As we board the boat for Portland, sure enough, she is approached by a few who ask, “Is it too late to sign up?”

Helping people tighten up their island homes against the sometimes brutal Maine winters, exacerbated by winds off Casco Bay, is an easy sell, especially as the realization settles in that cheap fuel is a thing of the past.

And it’s a relatively inexpensive investment with a quick and long-term return.

Weatherizing homes isn’t a new idea for Maine, a state with some of the oldest housing stock in the nation. Weatherization is essentially a fancy word for filling gaps, cracks and other penetrations in the outer shell of a house. But there is a fairly sophisticated science to figuring out where those holes are, and there is a lot of coordination to making it happen on an island, even one that is part of Maine’s largest city.

Suzanne MacDonald, energy program director for the Island Institute, along with Efficiency Maine, the non-profit group charged by the state with reducing energy costs, helped coordinate the program on Peaks.

At a community meeting over the winter, MacDonald and others explained the benefits of an island-wide weatherization effort, as had been done successfully on Vinalhaven. MacDonald said she hoped residents would get on board for a modest goal, something like 25 or 50 homes. But the idea took hold, and islanders said they wanted to aim for 100 homes.

Small recalled the meeting, saying, “People were like ‘Oh, we can totally do 100 homes.’ It became clear we had found something that people wanted to do.”

In fact, the response was so great that staff at Efficiency Maine are interested in learning how so much enthusiasm was built so quickly for the weatherization project.

Peaks Island is home to about 950 year-round residents. Many of the islands 500 houses are older, and some have been converted from seasonal cottages. As of late April, said Small, more than 90 people had the work completed or were signed up for work.

While a $600 rebate per home is available from Efficiency Maine to contractors willing to take on the work, convincing someone to bring a truck and crew to an island is not easy, MacDonald said. Mark Poirier, owner and operator of Heat Doctor, a Portland-based firm, agreed to tackle the work on Peaks.

He charges homeowners $125 to travel to the island, conduct an audit and do about six hours of air-sealing work; with the $600 rebate, the homeowner gets $725 worth of work.

“We want people to pay $200 or less,” MacDonald said. The Island Institute has or will subsidize the work on other, less accessible islands to ensure that the cost stays at that level, she said.

Poirier has worked out well for the Peaks project, MacDonald said. He agreed to lock in at a competitive price early on, confident that it would be worth his while as the number of homeowners signing on grew.

Valerie Kelly and her husband bought their island home in 1993 and moved there in 1995. She’s an agricultural economist and he’s a physician, and for most of their working life, they were in Africa. They retired earlier this year.

As Poirier and his crew inspected and worked on her 1970s-era house, she explained how and why she signed up.

“I saw all the notices,” she said, “and I thought it was for people who couldn’t afford to do it themselves, so I just ignored it.” But when her neighbor got the work done and told Kelly how pleased she was, “I filled out the forms and applied.”

The two-story house, tucked into the woods near the island’s southeast shore, is heated with a variety of appliances.

A kerosene Monitor is the main source on the first floor, which “doesn’t quite heat the upstairs the way we like when it gets really cold,” she said, so it is supplemented with two electric heaters on the second floor. Two propane fireplaces also are used. Late in the winter, Kelly bought 150 gallons of kerosene for a 200-gallon tank, “and it cost me over $700.”

She hasn’t worked out just how much she’s paying, “But we’re obviously paying $5,000 or more” for propane, kerosene and electric, she said. “I know the kerosene is at least $3,000.”

THE ABCs OF AIR

Poirier is certified as an auditor and insulator by BPI (the Building Performance Institute, Inc.). The first step is to inspect the house for carbon monoxide and other ventilation problems, he explained.

“It artificially simulates winter conditions, zero degree temperature and 20 mile-an-hour wind,” which is when a house would experience air leaks, Poirier said.

The air leakage can be calculated to BTUs and a cost associated with it. And of course, using thermal imaging devices and smoker sticks, the incursions can be located.

The fixes come in A, B and C steps, he said, which stand for attic, basement and “comfort” or living space.

The attic is the first stop, which is inspected for leaks around plumbing and fan vents. Fiberglas insulation is lifted and examined; if it’s dark with dirt, air is passing through at a high rate. Another likely suspect for leaks is the attic access panel.

In Kelly’s house, the crew took some time to seal around a metal chimney pipe from one of the gas fireplaces that passes through a small closet upstairs.

Poirier explains that houses often experience the chimney effect. Cold air, even though it is heavier than warm air, gets sucked up from the basement. The sills, rim joists and exterior bulkhead doors are common leak sources.

“That’s where we concentrate,” he said, using rigid foam, spray foam or caulking.

In the living space, the air is warmed and it expands, and then as it rises onto the second floor, it expands further.

“There’s a lot of pressure on the top floor for the air to escape, and as it escapes, it needs to be replaced by air from the outside and it draws it in low, from the basement,” he explained.

So after sealing gaps, cracks and holes in the basement and attic, the crew will turn its attention to the living space. There, Poirier said, it’s “Door sweeps, windows, breaches in the sheetrock” that get the attention.

With this approach, he said, “we can see a pretty significant difference in air loss.” Typically, a homeowner recoups the cost within a year, Poirier said, with at least 35 fewer gallons of heating oil needed a year in a house that’s been weatherized.

Noticeably absent from the punch list of fixes are big-ticket items like new windows and doors, or even adding layers of insulation.

The protocol for weatherization, explained Dana Fischer of Efficiency Maine, is to go after the low-hanging fruit because it yields immediate, lasting and low-cost savings. Another layer of cellulose insulation in the attic or in the walls certainly has its benefits, he said, but a couple of cans of spray foam and a few tubes of caulking applied to the right places can dramatically reduce heating bills.

The Island Institute continues to work with island partners to plan similar island-wide weatherization projects through the spring on Monhegan, Isle au Haut and Vinalhaven. 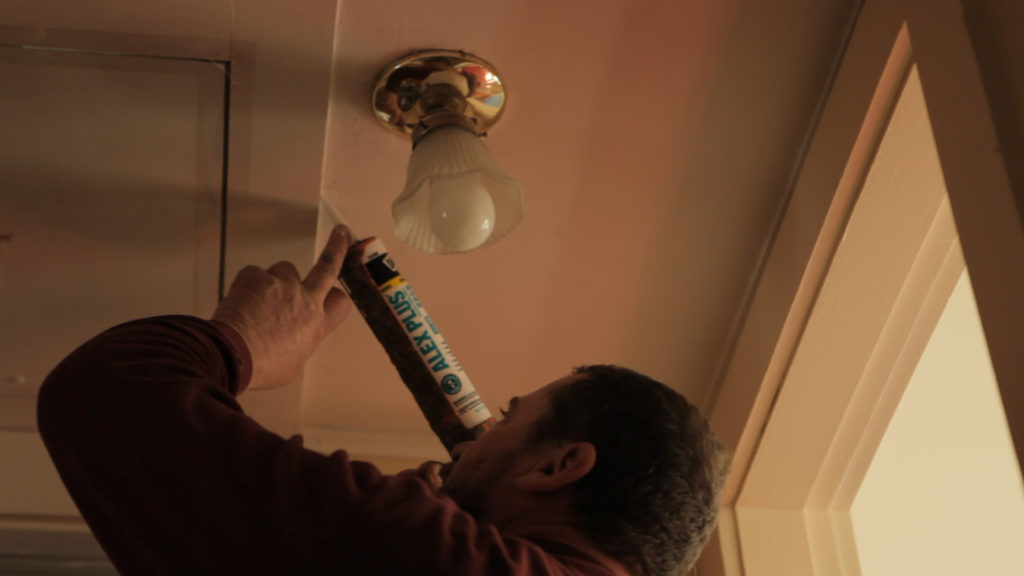