It’s an oft-repeated, but inaccurate statistic—Peaks Island has never seen 1 million visitors, nor will it likely see that many this summer.

But the island, with a year-round population of about 900, does see several hundred thousand visitors each year, staying for the day, overnight, a week or several weeks.

For an island of just 720 acres, the impacts can be substantial.

The Casco Bay Lines company, which provides ferry service to the island, reports that for the period from April 1, 2013 to March 31, 2014, 675,044 passengers disembarked at Peaks. Casco Bay Lines carried a total of 946,184 passengers that year, with the approximately 300,000 others landing on Great Diamond, Cliff, Long or Chebeague islands, or staying aboard for the scenic cruises the company offers.

Caitlin Gildart, director of sales and marketing for Casco Bay Lines, reports that the passengers to Peaks count grew from 650,517 the previous fiscal year.

The island, part of Portland and just 2.5 miles from the city’s East End Beach, has become a popular destination for vacationers and daytrippers. A series of live music parties at the Harbor View at Jones Landing—the “Reggae Sunday” events, which begin in late May and continue through the summer—bring hundreds of revelers.

But for a former member of the Peaks Island Council, an elected body established in 2007 as an advisory board to the Portland City Council, and a current member, there are other greater impacts.

“The weekends are hectic in the summertime,” said Cheryl Miner, who has lived on the island for 14 years and served three years on the council. “There are hordes that come off the ferry.”

The reggae events are very visible, she said, because the establishment that hosts them is a stone’s throw from the ferry landing.

“Sundays are wild for a few hours,” Miner said, “but they pretty much stay at the landing. There were some issues,” she added, “but Robin [Clark, owner of Harbor View at Jones Landing] tightened up on it,” hiring bouncers. Miner contends many of those attending arrive inebriated, and occasionally a drunken person causes trouble of some kind in the downtown area.

“It’s noisy—I can hear it at my house—but I can the music from the inn when have weddings,” Miner said.

Miner notes that most of the businesses, such as Jones Landing and the inn, are owned by islanders. “We have to have visitors to stay viable,” she said.

Both Miner and Lisa Penalver, the current vice-chairwoman of the island council, point to cars and golf carts as problems greater than the reggae revelers, vehicles that are predominantly used by those who rent cottages by the week or month.

“I understand why it’s happening,” Penalver said of the growing numbers of visitors. Stories extolling the island’s charms have been featured in The Washington Post, Boston Globe, Providence Journal and other publications, she said.

“We’re also incredibly easy to get to,” Penalver added.

Like Miner, she knows island businesses need tourists to survive.

Despite the 20 mph speed limit, visitors often drive too fast for the island roads, she said. Miner speculated that renters conclude it’s easier and cheaper to load their baggage into their cars and come over on the vehicle ferry than to park for $30 a day at the Casco Bay Lines’ parking garage. (Penalver noted that another lot near the Ocean Gateway can be used at $10 a day.)

Two years ago, a business began leasing golf carts, and last year, another opened shop on the island. Though Peaks has a special exemption allowing golf carts to operate on streets, drivers licenses are required for those behind the wheel.

“I have stopped a number of children operating a golf cart on my street,” Miner said, while Penalver observed “more golf carts then ever” last summer.

Penalver also has witnessed “a huge increase in the number of vehicles” in recent years.

Both women describe the congestion at the landing area on the western shore, known locally as “down front.” Drivers bring their cars onto the dock, only to find out that a line of vehicles for the ferry is backed up around the corner. Backing off the dock area, as scores of pedestrians mill about, can be hazardous.

The island council has asked Portland police to be more active on the island, and officers do patrol on weekends in summer. More help could come from a police “cadet,” the women said, a parking enforcement officer who would be trained by the Portland police department.

Though the mythical 1 million visitors are not on the near horizon, more people arriving is a given.

“If the economy is good, we’ll have more people,” said Miner.

“It does feel like we’re getting over-run,” Penalver said, with many of the visitors perceiving the island as a kind of “theme park.”

Though the “theme park” perception rankles some, Miner pointed out that the island was once billed as “the Coney Island of Maine,” and featured a roller rink, carousel and theatre. 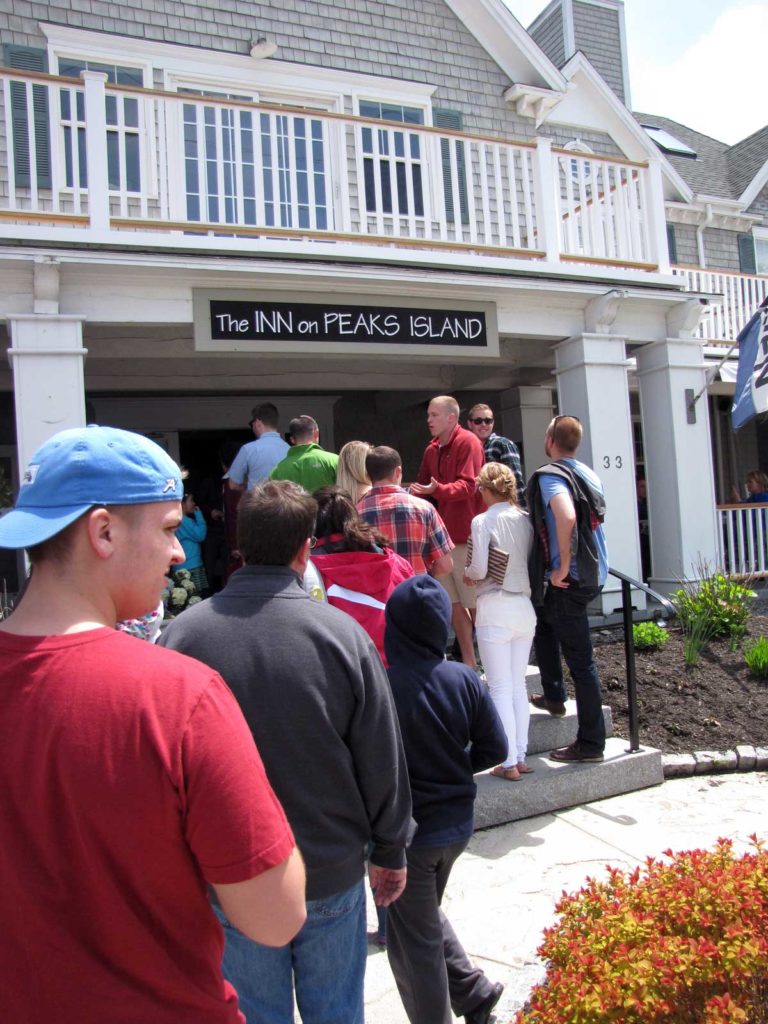 A line forms outside the Peaks Island Inn during Memorial Day Weekend 2014.