Bucksport’s poet laureate has lived there nearly all her life. And from her corner of Maine, she’s also one of the state’s best-known poets, with a plaque recognizing her accomplishments set in a step of the University of Maine’s Fogler Library, and invitations to read and talk about her poetry from here to the West Coast.

But if you ask Patricia Smith Ranzoni, all she’s really been doing is practicing Maine’s traditional lifeways. Among which, in her world, have been subsistence farming, fishing, canning, stitching, cooking, teaching, taking care of children, and, as it happens, the art of poetry. A folk art, as she sees it, practiced not as an aesthetic pursuit but as an age-old form of entertainment and communication. A commonplace of life and community Downeast.

“From my youngest years and first awareness of speech, words, listenings, and noticings, I was aware of poetry as a loved element in our, Maine, culture,” she said recently, in reply to a question about how poetry works in a community. She recalled how during the ice storm of 1998, which left hundreds of thousands of Mainers without electricity for days and weeks, “the Bangor radio station that broadcast throughout was inundated with poems documenting the experience from the listening audience … It was a remarkable demonstration of the way poems have always been a primary way we have expressed the often overwhelming experiences and conditions of our lives.”

Ranzoni’s conditions in particular are those of working and underclass rural Mainers—her own. She was born in a boarding house in Lincoln in 1940. The family lived for a time with the Penobscots and then in a “tar-papered house” built by her father in Enfield: “No water, electricity, telephone, car. One lamp. Where … sacks of potatoes behind the wood stove caught fire, and we got put to bed in our snowsuits.”

The Smith family landed finally in Bucksport, near the Castine farm where Ranzoni’s mother, the granddaughter of Capt. William Snowman, had grown up. When her father returned from World War II, the family bought a subsistence farm, and except for one sojourn to Massachusetts, Ranzoni has been anchored in Bucksport ever since.

She worked her way through the University of Maine, where she met her husband, Ed Ranzoni, and became an elementary school teacher. She founded a nursery school and kindergarten in the area, along the way earning a master’s degree in education, coordinating county child development services, and working as a child development specialist and family counselor—all while maintaining the homestead and traditional lifeways learned as a child.

One of those lifeways was poetry, and it turned out her sense of not just personal, but generational depth translated into some of the most powerful poetry any Mainer has written in the last 50 years. It’s appeared in many local and national literary journals, and her collections include Claiming (1995), Settling (2000), Greatest Hits (2008), Hibernaculum & Other North-Natured Poems (2010), Bedding Vows (2012), and others. Its prominent themes are home, hearth, and family; deeply felt connections to nature; and the presence of ancestry and history in the lives we actually live: “Our findings, story by story, in the universal mind,” in her phrasing from the poem “Steps,” read during the dedication of the plaque at Fogler Library in 2004.

Ranzoni’s concern for the legitimacy and dignity of Maine’s outback culture produced the book Still Mill in 2017, on the impact of the Verso paper mill’s closure in 2014. The Bucksport area’s collective life had been built around the mill, and so Ranzoni set about collecting personal testimonies, poems, songs, recollections, photos, drawings, and newspaper clippings from the 1920s forward to document, preserve, and enshrine the feel and depth of generations of experience shaped around the mill. A Bucksport manifestation of what Ranzoni calls the “deep, high, Maine.”

Ranzoni says her “documentary poetry” is devoted to “keeping the old ways.” Not just in her own writing space, kitchen, and farm, but as a force in the whole community. Poetry is an old lifeway, deeply felt, and deeply shared. Her sense of a community language is very likely what makes her poetry so recognizable and appreciated in Bucksport and elsewhere. 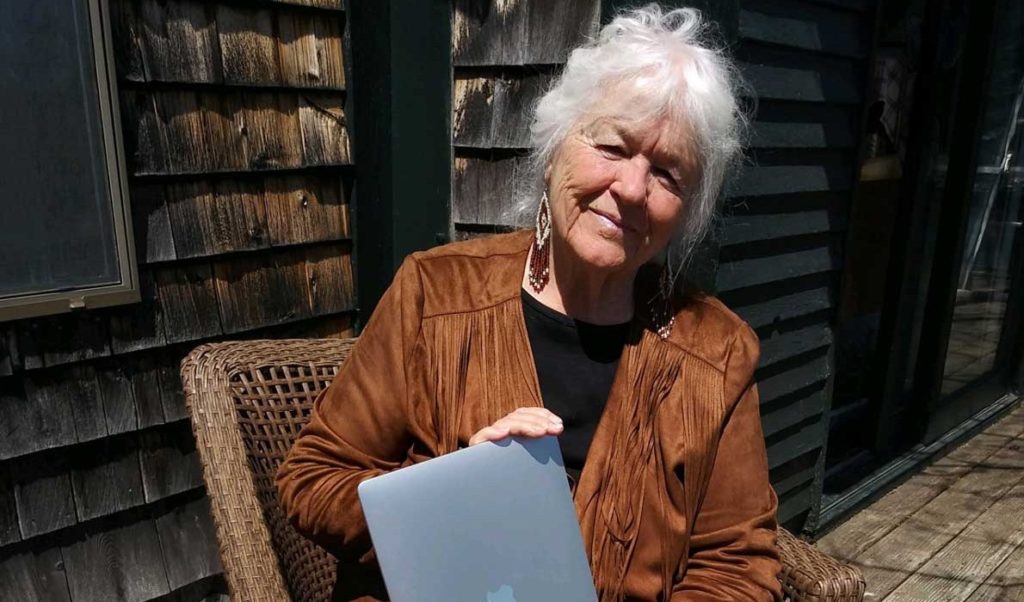