This is the second in a three-part series about the role boat builders and boatyards play in Maine’s coastal and island economy.

Boatyards, marinas and boat builders represent a large part of the state’s island and coastal economies, accounting for more than 2,200 jobs. But these businesses, often run by families, are facing obstacles as they plan for future management and ownership.

And much is at stake—if the yards are sold for other uses, the state loses part of its working waterfront, which is estimated at just 20 miles of the coast.

At the Island Institute (publisher of The Working Waterfront), we often hear from coastal residents about their concerns:

“The owner of the local boatyard is getting older and is unwell—I don’t want this business to fail because it employs a lot of local residents.”

The problem isn’t unique to boatyards, but with historic, family-owned businesses that provide essential services to the community, their success can sometimes be imperative in maintaining that local economy.

Preparing a business for sale to a family member, employee or an unrelated buyer requires substantial investment in infrastructure and systems. The Maine Marine Trade Association has offered several trainings on succession planning.

“It’s on many people’s minds, but most people don’t have official plans,” she said. “Formal succession planning is not always something that comes naturally.”

It’s not all bad news for boatyards, however, and with the assistance of Swanson and others, often the right solution can be worked out for buyer, seller and the community in transferring ownership.

J.O Brown and Son, Inc. is a community institution on North Haven. Adam Alexander is the fifth-generation family member working at the boatyard.

“It’s a tradition, and there are always people in the family who care about the business and want to keep it running,” Alexander said, explaining the commitment to retaining the family’s ownership. Currently, he runs the business jointly with his mother, cousin, uncles and other family members who have dedicated their lives to making the boatyard successful.

Swanton is noticing many family-owned boatyards are welcoming children back, after they left home to earn a college degree. The graduates then apply their new skills to running the business. Alexander, who oversees the boatyard’s operations, is one example.
“Everyone is working so hard and has so much investment in the project,” he said, “that it was hard for my family to step back and revisit processes and systems.” Doing so can make the businesses more efficient and profitable.

Alexander was able to “fine tune processes and budget, and update systems,” he explained.

Several generations have been thinking about and planning for the future of J.O. Brown with an eye to ensuring it remains family run and successful. Alexander said his grandfather’s sage words will always drive his focus on the family business: “If you aren’t going ahead, you are going behind.”

Josh Gray, the owner of the Newman & Gray boatyard on Great Cranberry Island, also sung the praises of the opportunities created by a family-owned boatyard model. Josh Gray bought the business from his father in 2012.

“I took over at a time when my father still wanted to be involved, but wanted to be able to take a step back,” he explained.

Josh had no plans to take over the boatyard and his father, Ed, was unsure about the boatyard’s future without any clear succession or sales plan.

Josh realized after spending time in Washington, D.C. that he wanted to return to the island, and “liked working with my hands better than sitting in the office.”

Ed Gray didn’t plan to hand the business over to his son. But Josh was confident he could win over his father.

“If I came back and worked hard at it, I could prove to my dad that it was the right move,” he said.

Like Alexander, Gray used his experience and education to put new systems in place and revitalize the business. It has seen significant growth in the last few years. Gray is proud of how the transition happened and said the opportunity to take over his family business allowed him to continue the family tradition without being burdened by the debt that would have come with buying a boatyard outside the family.

Passing a family business to the next generation is a good outcome, but many who attend the Maine Marine Trade Association’s succession planning training do so because family members are unwilling or unable to take over the business. For these owners, the best option is to find a buyer who respects the community and tradition, and loves boats.

After a year of creative negotiations with the former owner, Leon and Sara MacCorkle bought Padebco, a boatyard and custom boat builder in Round Pond in Lincoln County. The couple wanted the lifestyle that comes with living in a small town, owning their own business and having their children spend summers playing by the water. They knew it was going to be hard work.

“We feel like we work ten days a week and are constantly thinking about the business, but we wouldn’t have it any other way,” said Leon MacCorkle. “We are fortunate to have a strong team and great clients. We absolutely love what we’re doing, owning a boatyard and living in Maine.”

After three years, it’s clear that tradition and community influence their business decisions.

As MacCorkle was about to trade-in the yard’s 1980s era pickup truck, he heard from community members that it was an important fixture, and instead repaired it. More challenging is an iconic building in need of a new roof, along repairs to pilings and a bulkhead. It’s an expensive undertaking, and figuring out how to use the building so that it contributes to the business will be an important part of its future.

The purchase of the boatyard was a good time to revisit processes and systems.

“Many businesses function with the mentality of, ‘We’ve always done it this way,’” MacCorkle said. “I get it; change is tough. It’s so important to view change as an opportunity to improve something, and not as an adversary.”

Three years ago, Padebco partnered with SafetyWorks!, a state program for small, private businesses that works to improve workplace safety and health.

Working to build the community, Padebco designed a brochure for their transient mooring customers, highlighting businesses in Round Pond Village and mentioning Padebco’s services on the back.

“We live in an amazing area, we want boaters to come ashore and see what Round Pond has to offer,” Sara MacCorkle said. These efforts, other advertising and a lot of hard work have helped grow storage and service customers and will help the business be profitable.

Succession planning can mean confronting difficult questions, but it’s necessary for any business. With boatyards playing such an important part in coastal and island economies, navigating these waters is important for us all.

Nick Battista is director of marine programs and Briana Warner is economic development director at the Island Institute, publisher of The Working Waterfront. 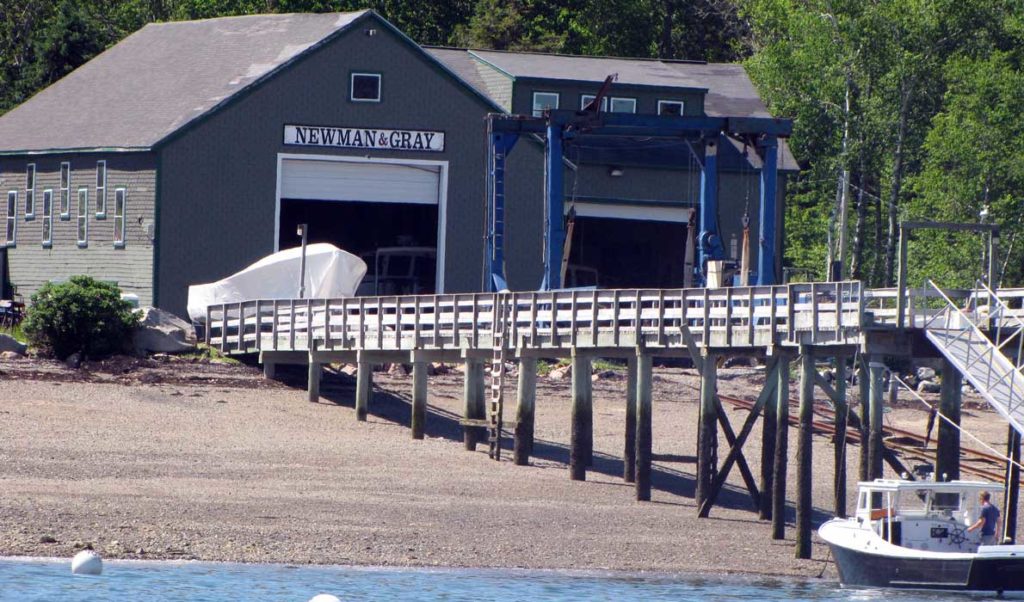