For the first time in years, the Passamaquoddy tribe used the traditional tribal inauguration ceremony on Aug. 9 to honor its leaders in an event held at Sipayik, the tribe’s reservation at Pleasant Point in Perry.

Fred Moore III and Vera Francis were elected as tribal chief and vice chief, respectively, a year ago and began serving then.

Scheduled to coincide with the 50th annual Indian Day Celebration, the inauguration was months in planning.

“Ceremonial days are held in August, the time of the green corn,” said Moore, a sign that there will be food for winter.

Moore has served eight years as a state representative and worked for decades as an advocate for native fishing rights, developing close ties with other tribal leaders. Many attended the inauguration, including Penobscot Chief Kirk Francis; Arren Sock, Mi’kmaq chief from Big Cove, New Brunswick; Bryan Polite, chairman of the Long Island, N.Y. Shinnecock council of trustees; and the Unkechaug chief, Harry Wallace. The Abenaki Seven Nations of Canada also was represented at the event. Sen. Susan Collins also attended.

After the welcoming dance and introduction of former chiefs, the guest chiefs and Moore sat in a small circle on the ground. Around them in chairs were seated the grandmothers from several tribes and Collins.  Each woman in turn offered guidance and support.

“They spoke the truth and set the tone,” vice chief Francis said later.

The women, some speaking in their native language, urged the chief to focus on health, education and substance abuse.

“I was reminded that I have stepped into a vessel in the storm of life and I need to see over the horizon and guide us through adversity,” Moore said later. “My office needs to pay particular attention to their deeply felt words.”

The invited chiefs then offered their words of advice and then assisted with the installation of the chief (sakom) and the vice chief (leptanet sakom). Dancers then surrounded the group and with specific dances, acknowledged the roles of Moore and Francis in bringing back traditional ways.

Combining the traditional and political is a goal of the new government.

“Thinking BIG,” is Moore’s approach for this four-year term, with the acronym standing for “Beyond Indian Gaming.” Using diplomacy within and beyond his own community, he plans to help not just the tribe but also the region. Food production is one area of work. 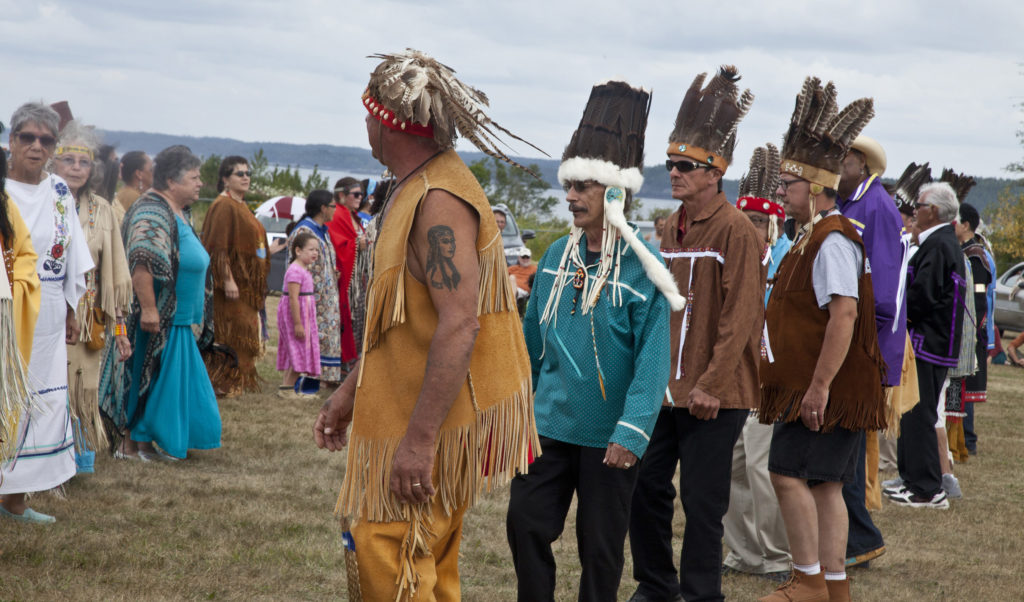 Members of the Passamaquoddy Tribe celebrate with a dance.