Growing up in a fishing community, I got to see countless lobster boats make their tight turns and sudden stops at the Islesford coop dock. Boaters love to show off, and there is no feeling like executing a slick maneuver in front of a crowd of tourists. There is also no feeling worse than making a stupid or clumsy blunder in front of a crowd, like dropping a boat hook overboard or banging the hull against the float.

On the USNS Washington Chambers, the ammunition ship I’m serving aboard this summer for my Maine Maritime Academy cadet shipping training, parallel parking is a different story than with a 40-foot lobster boat. The process seems slow from a spectator’s point of view on shore, but on deck things happen dangerously fast, and working the mooring stations requires sharp thinking and situational awareness.

First of all, this ship is 700 feet long and takes half a mile to turn 180 degrees. In Apra Harbor, Guam, there isn’t that much space to move around. The ship gets a push from two tugboats, one on each end, and they help turn the ship around in its own length so it can go port-side to the pier.

Then things on deck get crazy.

Six lines on the bow and six on the stern must be secured by powerful winches. The bos’n and mate on each end of the ship conduct the line handling, ensuring their crew do not get hurt in the process. They must follow orders from the bridge, hundreds of feet away from where they are.

The man in charge, the captain, leans on the edge of the bridge wing, looking at the space between his ship and the pier. Things move deceptively slow, but in reality he has to think two steps ahead of the ship or she will move beyond his control—even with the help of tugs and his powerful 30,000-horsepower engines. He watches his point of reference on the pier and decides he’s going too far forward too fast.

“Slow astern,” he calls into his radio.

Inside the bridge, the mate on watch responds with the same words, and nudges the engine telegraph to the slow astern position. The ship shudders as the engines catch the propeller shaft, and slowly her headway slows to a stop. But the captain knows from years of experience the moment he needs to stop turning the propellers, and before the ship even stops in the water, he calls again for the mate to stop engines.

The captain also takes stock of the environment around him. The water beneath the ship is quite deep—60 feet to the ship’s 30. If it were shallower, the captain would have to contend with suction forces of great power that would pull his ship one way or another.

The wind and current are working for him, though. He has instructed the tugs to push his ship in such a way that it is at an oblique angle to the elements, and they help him out in pushing the ship against the pier. As she settles into position, the massive black Yokohama fenders creak under the pressure and the lines are sent ashore. The captain watches as tension is brought up on each of them, and the ship sits at her berth, finally at rest.

The captain, now the superhero of the day, coolly calls the mate on the radio and orders “Finished with engines,” the signal that the ship is made fast and is ready to be shut down.

Docking a ship of this size is deceptively simple in appearance, but the number of factors involved require years of experience to master. That is not to say, of course, that it is easy to rip a 40-foot lobster boat into the pier and haul her to a stop with the flourish that makes lobstermen look so cool. 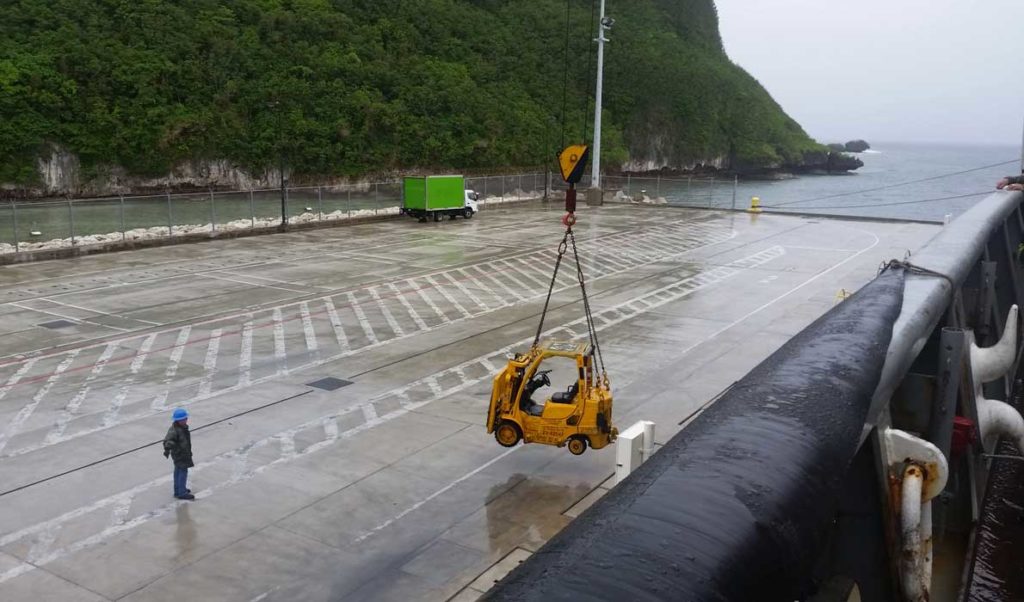