I hadn’t considered historic property management as a part of the work of running the Island Institute, but with a 165-year-old building on Main Street in Rockland being our headquarters, I’ve had to learn the basics.

I’ve learned that for some, the act of restoring historic properties is akin to an addiction. It’s easy to spot. A person who has been asked how their family is doing will proudly display pictures of the cottage they’ve meticulously restored.

“But what about the kids?” you ask.

These diehards have taught me that you are always just the most recent steward of historic properties.

Earlier this year, I found myself among the most committed of preservationists at PastForward, the annual conference of the National Trust for Historic Preservation. I was invited to talk about impact investing for the purposes of proactive preservation. Impact investing is a buzzword meant to capture the idea of nonprofits pairing grants and loans to invest in work where the return on investment is both monetary and social and environmental. Our work to proactively preserve historic access to working waterfronts drew the attention of this crowd.

When I arrived at the Island Institute 13 years ago, I hadn’t appreciated that just a few years earlier our organization became the steward of the historic Senter Crane building. The building was a gift from MBNA back when that wave of philanthropy and job creation was cresting along the Maine coast.

I would soon learn from my neighbors behind Main Street that Senter Crane had been a department store and as such, a part of the day-to-day lives of many families in the greater Rockland area.

“It’s were I took my first elevator ride,” has been a common refrain when people talk about the building in which I work. Today, most Rockland residents know our store, Archipelago, but they are not aware of what happens on floors two through four.

This has begun to change recently because of renovations underway at the building. Thanks to grant funding from Maine Community Foundation, we’ve been able to bring the systems in our building into the 21st century, focusing sharply on energy efficiency. We began back in 2012. We were paying $30,000 for utilities, and I can tell you that it isn’t much fun as the head of a nonprofit trying to raise money to heat an inefficient building.

Four staff members created an energy efficiency team, inspired by work being done by building managers at municipal buildings and schools along the coast. They began hosting floor-by-floor energy reduction contests to raise awareness of how much electricity we were using on each circuit in the building.

We also had our heating and cooling system inspected by newly trained HVAC engineers. Systems in old buildings are pieced together over the years. These folks were able to show us a range of quick fixes that would cut costs just by better use of our existing systems. Perhaps most shocking was learning that we were both heating and cooling one of the rooms in our building!

On average, new energy usage behaviors driven by studies like these can cut energy costs by 17 percent before ever investing in new systems. All of the work around energy efficiency in our building has begun to draw attention.

Two big groups (one made up of neighboring Rockland building owners) came to learn about the investments we were making in this historic property. All of a sudden, the importance of stewarding historic buildings began to sink in for me. This year our utilities were $27,000, and with the newly installed systems I suspect these costs will fall further. It makes good sense monetarily, and at the same time we are stewarding an important downtown historic building so that it will be a place of pride in our community for years to come.

I’m reminded of the myriad discussions I’ve had with historic property owners who’ve relayed stories about how everyone has an opinion, and regardless of what you might like to name your property, it already has a name in the community that simply will not change. Today we may call the building Island Institute, but it will always be Senter Crane. 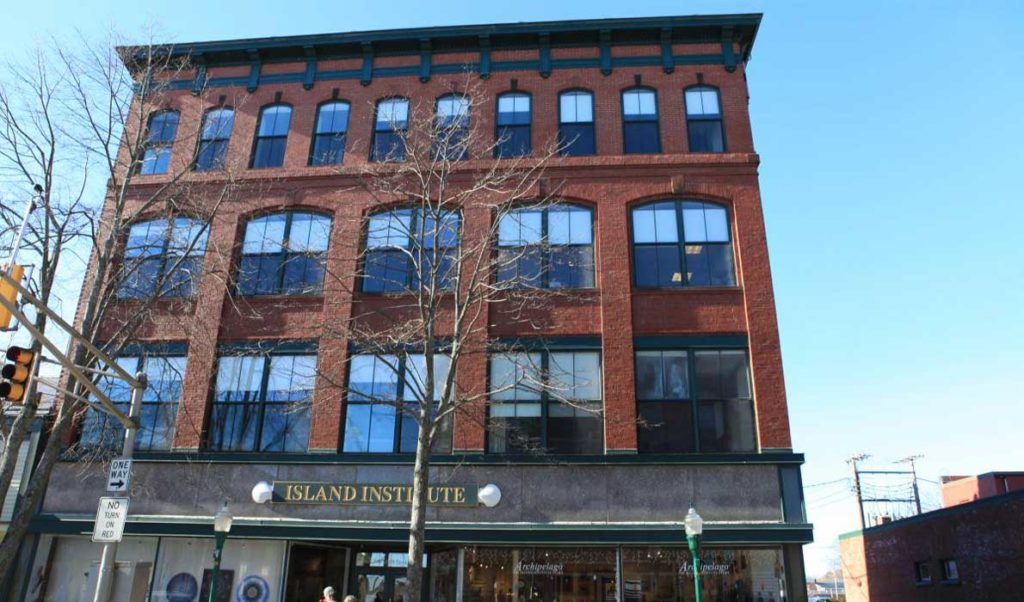