Making ends meet from season to season is a challenge for many islanders. Finding additional avenues of income can be difficult in an isolated community with limited resources.

It is, in part, to that end that Vinalhaven Kelp, Inc. was established. The business is a new venture seeking to prove that growing kelp can be profitable, while at the same time educating the public about alternative ways to make a living in the off season.

Emily Lane, president of Vinalhaven Kelp, Inc., leads a board of directors that requires 70 percent of the business shareholders to make their livelihood from some sort of fishing.

Growing kelp, Lane explains, is “a way to look to the future to develop alternative fisheries that would not be in competition with lobstering. Today there are so many things that can work in tandem with lobstering,” she said. “It’s a matter of spreading that public awareness.”

Kelp is a winter crop; most of the work to grow it is required during the lobstering off-season. Seeding takes place in the late fall, the kelp grows during the winter, and it’s harvested in the early spring.

Vinalhaven Kelp, Inc. was awarded a limited-purpose aquaculture lease by the Department of Marine Resources, which allows the company to set two 800-foot lines in Winter Harbor. According to Lane, a company will typically use such a lease for a couple of years before deciding whether to expand and secure a standard Lease, which allows for up to 100 acres of aquaculture.

The limited-purpose lease “allows you to get your feet wet and assess if you want to continue,” said Lane. 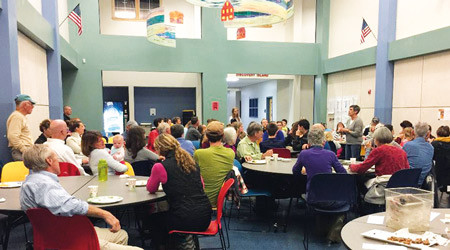 A meeting about the kelp initiative drew 70 people.

Vinalhaven Kelp, Inc. vice president Shelby Smith set moorings in late October and seeding was to take place the week after Thanksgiving, all with the help of Paul Dobbins, owner of Ocean Approved, Maine’s only kelp buyer and processor. Dobbins is providing support and the kelp seed in return for a commitment from Vinalhaven Kelp, Inc. to sell him its product at a set price.

When Vinalhaven Kelp, Inc. harvests its crop in early spring, it will deliver it, wet and cool, to Rockland, where Dobbins will pick it up. Dobbins will wash and freeze the kelp until he can process it in late summer. Ocean Approved makes kelp food products including kelp slaw, seaweed salad, and kelp cubes meant for use in smoothies. The company landed a grant to further develop food products from kelp. Ocean Approved sells these products to institutions.

After the spring harvest, Vinalhaven Kelp, Inc. will take up its lines, leaving only moorings, so as not to interfere with the lobstering season.

In addition to Dobbins, Vinalhaven Kelp, Inc. has received assistance from many others, including the Hurricane Island Foundation, North Haven kelp farmer Karen Cooper, and the Island Institute (publisher of The Working Waterfront).

The Island Institute has “literally taught us everything we know so far,” said Smith. In addition to educational support, Vinalhaven Kelp, Inc. received two micro grants from the Island Institute for help in developing its business plan, attending workshops, incorporating, marketing, and education.

“We’ve had a lot of support,” said Lane.

“I think Kelp Night is the perfect example,” said Smith, referring to a public informational meeting and potluck held at Vinalhaven School in late October. “I never would have expected 70-plus people to show up,” she said. “It was really uplifting for us.”

Vinalhaven Kelp, Inc. has also reached out to Vinalhaven School, which has middle and high school students conducting a kelp growing experiment. In addition, students in the Perspectives After School program spent the month of October learning about kelp. All the activities were included in the Kelp Night program.

The company plans to videotape the seeding process.

“We’re going to be as public as possible as we build this business,” Lane said.

Among the benefits of growing kelp, besides the alternative revenue stream for fishermen, is that it helps counter the growing acidification of the ocean. Kelp absorbs nitrogen, phosphorus, and carbon dioxide, three nutrients too abundant in coastal waters.

Vinalhaven Kelp, Inc. hopes to eventually expand to include growing mussels, as kelp helps to filter water for the shellfish. Raising mussels is much more expensive and labor intensive than growing kelp, so that product will remain a long-term goal for now.

Vinalhaven Kelp, Inc. is breaking new ground—or water—in island aquaculture, with others not far behind. To Smith, it just makes sense.

“We live in this place where there’s an abundance of working waterfront,” said Smith. “Why not look for ways it can be utilized?” 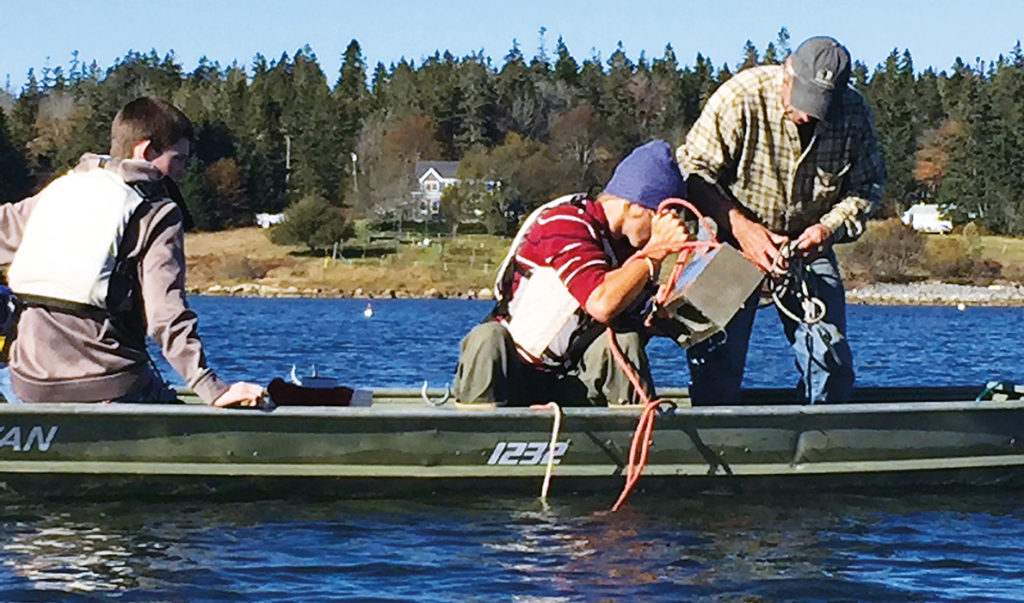