Steve Lyons has been with the Maine Office of Tourism since 1998, working under three directors. With the departure of Carolann Ouellette, he is now the acting director of the small office—which has just seven employees—tucked within the Department of Economic and Community Development.

But there’s nothing small about the office’s mission. Tourism is one of Maine’s largest economic drivers, accounting for $6 billion in direct spending in 2016, with a total economic impact of almost $9 billion. In the years following the Great Recession, visitation to Vacationland continues to grow.

Lyons hopes to be named as permanent director, and his longevity and steady hand through changes in marketing strategies make the case for that promotion.

“I’ve been here long enough that I know a lot of the players already,” he says. “Things have evolved,” he explained of his tenure, from marketing to bus tour groups, to overseeing the contractors operating visitor information centers, to research.

“The last several years, I’ve been the director of marketing,” working on a day-to-day basis with the advertising agency the state uses to get its message out. Lyons explains how the dominance of the digital world has impacted marketing, while other marketing approaches lean on the tried and true.

The Working Waterfront sat down with Lyons in the state office building in late March. The interview has been edited for length and clarity.

WW: In your time, metrics have changed, in the way they’re gathered. It’s become much more sophisticated. How has that impacted marketing and decisions made around tourism?

Lyons: We still look at a lot of the same old metrics that we have for years. We still use taxable sales as a barometer of how we’re doing. We get that on a monthly basis from Maine Revenue Service. We also look at our annual visitation studies.

What has changed, certainly with digital becoming more prevalent in the marketplace, is you are able to analyze and evaluate your campaign on the fly.

When we used to have a TV ad or a print campaign, you had to wait for the results until the whole campaign was over. With digital, you can track individual channels to see what it’s doing. You can move money around in one channel where it’s doing well.

WW: There’s been a growth trend in recent years, a steady upward…

Lyons: From 2011 or 2012, we’ve had about an annual 6 percent increase in visitation, on average. Expenditures have gone up, as well. It’s been a very successful campaign, when we started this new “Maine Thing” campaign, which we started in 2012.

WW: Some of it can be attributed to this campaign, but is it also pent up demand?

Lyons: I think it’s a combination. Certainly, our campaign has been very successful. It’s got very specific goals, going after first-time visitors. Since we’ve had that goal, our first-time visitation has increased substantially.

We’ve also moved our marketing around a little bit. We still focus on eastern Canada, New England and the mid-Atlantic states, but we’ve put a little heavier budget down in the mid-Atlantic states because we find that those people are staying longer and spending more money. It’s also where the bulk of our first-timers are coming from.

WW: I know first-timers are so important because research has shown that once they come, they tend to return in very strong numbers, right?

Lyons: They do. It’s something like 90 percent of the people return if they’ve been here. And that’s very high. We get some raised eyebrows sometimes from other states (skeptical of the numbers).

Lyons: New York, New Jersey, Pennsylvania, Delaware, D.C. And we actually have expanded out as far as Charlotte, N.C. We started that last year.

WW: I’ve heard it said that those people have to book in advance, they can’t watch the weather and make a last-minute decision to go elsewhere.

Lyons: It’s difficult to track that, but I think it has played out that way. If you have people coming from further afield, obviously they have to make that commitment. They’re less apt to cancel.

I think that’s one of the reasons we’re doing so well in the mid-Atlantic markets.

We used to focus a lot of attention on the Boston and Massachusetts markets, and we still do—it’s an important piece of what we do—but everybody in Massachusetts has been here before.

I was down to the Boston Globe travel show a few weeks ago, talking to people, and they say, “Oh yeah, we love Maine. We go there all the time.” It’s not as necessary to spend as much money there.

For us, if we’re going to spend our money wisely, we want to move into those markets where people may not be as familiar with us and generate, again, first-timers.

WW: Who would you say are Maine’s chief competitors in the tourism market?

Lyons: When we look at our market-share numbers, we compete very heavily with the other New England states.

But people travel a little more widely now than when I first started 19 years ago. With international travel being easier, a lot of travelers like to go to a place, try it, and then try someplace new the next year. So while we’re still getting people returning, it might take a little longer for them to come back than it once did.

WW: The tourism office has moved away from the demographic-based marketing approach to the experience thing. Do you feel that was a good move?

Someone said to me the perception is that Mainers have “figured it out,” that life-work balance thing. People here are doing what they’re passionate about. And they want to share that with other people, and they’re living this life style in this beautiful place. We’re trying to get people to aspire to that.

WW: If somebody gave you $1 million for a one-time marketing expenditure, where would you spend it?

Lyons: We’d probably try to do broader domestic U.S. coverage. We’re only covering the East Coast, and not even all the way down the East Coast.

If we had $1 million, we would probably get out to the Midwestern states and some of those other states that pop up in our research. If you look at our website, VisitMaine.com, there are a lot people from Florida, Texas and California browsing the site. It may be that their populations are high (and so are better represented).

But we would probably expand nationally.

We actually had a big increase in visitation from Canada last year, even though their dollar was low. But it’s a lot more costly to advertise in international markets.

WW: Last question: I know Washington County leaders are doing a lot to promote their region. What might be your advice to them to boost their tourism?

Lyons: The advice we’re giving them is to look at all the things that are around you. One town does not make a destination. Look at what exists there already.

You’ve got the Bold Coast scenic byway, and there’s a fisheries trail… there are lots of various trails. Put all these into one promotion (while listing adjacent activities). If someone travels all that way, they’re going to want to see more than just one town. 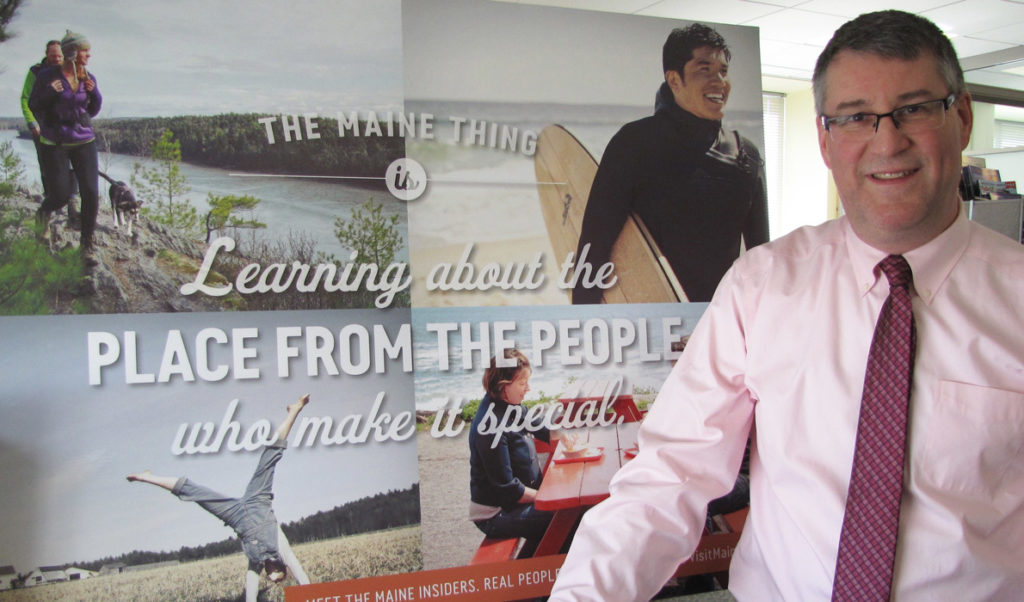