The plight of the North Atlantic right whale has steadily made its way into Maine news. One of the world’s most endangered large whale species, the population of about 400 is shrinking due to increasing mortality and lower birth rates. Stakeholders, including Maine’s lobster industry, have implemented numerous measures over the years to mitigate human impacts, which include fishing line entanglement, ship strikes, and underwater noise pollution. Efforts to further reduce impacts continue today.

The Working Waterfront: What factors contribute to our understanding of the importance of saving the North Atlantic right whale?

Sean Todd: First is the biological mandate. They are a sentinel species. Right whales are highly responsive to environmental change, so we can use them as indicators of the health of the environment.

Second is the legal imperative. “We the people” agreed that we value marine mammals to the point where we think they should be protected. The legislation is designed to rebuild those stocks back to where they should be naturally.

Third is the ethical mandate. There’s no doubt that humans have caused this species’ low population number. On a personal level, I like to think humans care. We don’t want to kill these animals. We want them to be able to live sustainably in their natural environment.

TWW: Can the population be saved?

ST: I think it’s possible. In the past, other species have recovered from similar levels. But the fewer there are, the more difficult it becomes. We know there’s a genetic bottleneck already. There is only one other cetacean in more dire straits. The vaquita—a small porpoise that lives in the northern Gulf of California—numbers less than 30 individuals, and is perhaps impossible to save. But I believe we can still save the right whale.

ST: Many would say no. The framework is in place to create a conservation plan. But enacting that plan is politically fraught. As stakeholders come to the table, we should all be willing to compromise, ready to trust, innovate, and evolve. The most effective workshops I attend place fishermen, scientists, NGOs, and policy makers side-by-side around a table. No “us and them.” Just “us,” trying to save the species.

TWW: How does one balance the risks to right whales with the risks to fixed-gear fishermen who are told to change their practices?

ST: I’ve been grappling with that important question for 30 years, starting in Newfoundland when we worked on similar problems with humpback whales that became entangled in nets. We learned not to cut line haphazardly but instead work on lines that minimize damage to the fishing gear; when the whale was freed, the fishermen would have an easier time repairing their gear. Of course, we now know disentanglement is the last line of defense. We need to stop whales becoming entangled in the first place, and so naturally that means we need to examine fishing practices.

Fisheries can, and should, evolve and innovate as technology and mandates change. Fishermen talk about ropeless fishing as if it were science fiction, but weren’t cell phones considered the same back in the 1980s? Research and entrepreneurship changed that in one short decade.

What if fisheries could earn a whale-safe certificate in return for their contributions and the whale-safe strategies they have adopted? And the market could choose to buy lobster only from certified fishermen. Wouldn’t it be fantastic if the industry took this issue on with pride, and could brand their product in that way? But none of these ideas work without industry buy-in. It’s clear to me that traditional thinking has not worked well so far. We need to think outside the box.

TWW: Do other Gulf of Maine whales face similar risks?

ST: Humpback and minke whales still get entangled in fishing gear, too. Their numbers are more robust, so it’s not as significant a source of mortality. However, anything we do to protect right whales will also help humpbacks and minkes.

Even if not as biologically significant, the ethical and welfare mandates associated with entanglement still persist for those species. In the case of Churchill (an entangled right whale that died in 2001), the animal was entangled for so long, and it cut so deeply into the blubber, that the skin had started to grow around the line and the wound began weeping; sepsis crept in and there were parasites all over the wound. The animal suffered this for months. No human with an ounce of compassion would think that’s a good thing.

If this were your dog, you would not tolerate that. You would do something about it. 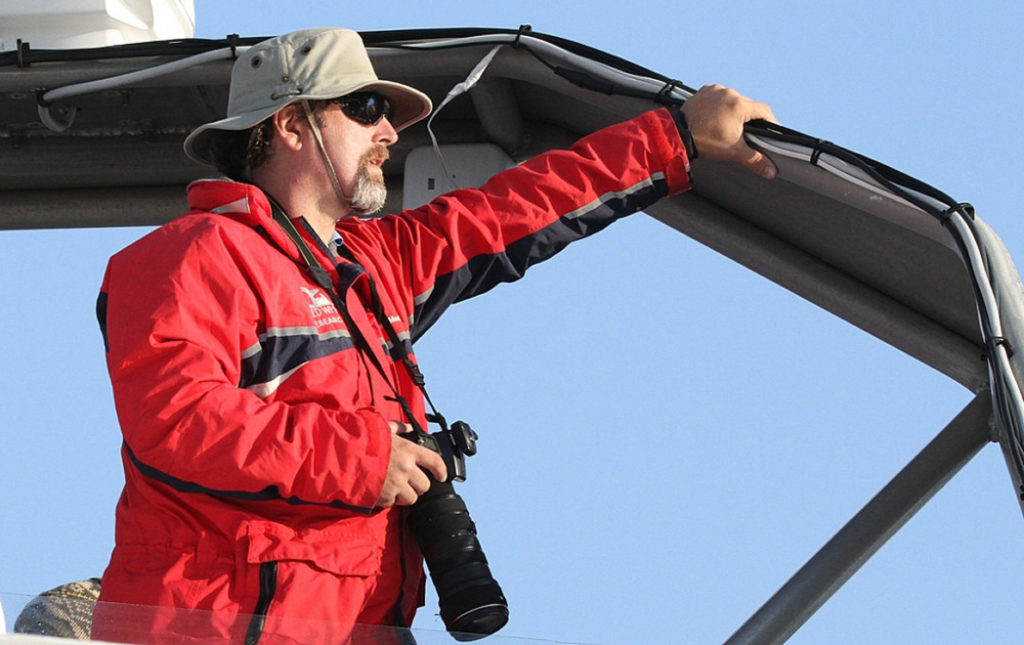 Sean Todd of Allied Whale and College of the Atlantic.