Gordon Page came to Rockland in 1982 for a job at National Sea Products, a company on the city’s waterfront that processed frozen blocks of fish. Today, he’s the executive director of Rockland Main Street, a nonprofit group that works to boost the city’s downtown business district.

Observers say Rockland’s Main Street is a model of downtown success, with the sidewalks and shops thick with tourists in the summer months, and busy with locals the rest of the year.

Page’s job is to keep the momentum going, and part of his approach is to be visible—on any given day, he can be seen on Main Street, chatting with business owners and employees, sharing and gathering information.

WW: What’s the state of Rockland’s downtown these days?

Page: The state of Rockland’s downtown is quite solid. We have some opportunities yet to be discovered, but we’re heading in the right direction.

Page: One of the challenges we have is upper floor occupation, second and third floors of some of the larger buildings. Certainly, some of those buildings are occupied with residential and professional and commercial use, but we are probably at about 45 percent occupancy on those upper floors. Some of them are just not ready to be moved into; others, we’re just waiting for tenants.

WW: What do you worry about for the downtown? What would be a worst-case scenario? Is it rents being out of reach? Is it too many chain businesses coming in?

Page: I think chain businesses are not really a challenge for downtown Rockland. The community has done a good job in keeping those isolated into the areas that are better suited for them.

Short of a remarkable disaster in downtown, we don’t have too many things to worry about. Some of the ongoing challenges include traffic speeds on Main Street. We’re a small, downtown Main Street—roughly a half mile, from the public landing to the ferry terminal…

Page: It’s also U.S. Route 1. It’s one way, it’s also very narrow, it’s a 25 mph speed limit, which is dictated by the state. But we do have traffic speed issues that we’re always trying to battle.

WW: What are the top gripes you hear from business owners about the way city government functions or the way the downtown functions?

Page: There are no complaints with the city of Rockland (laughs). Our focus at Rockland Main Street as an organization is the revitalization of the downtown. We hear a number of complaints from residents who have little interest in the downtown and think there’s too much emphasis, too much focus on our Main Street and what we have here.

In some cases, it’s valid. They see things going on in downtown, yet perhaps their sidewalk in their neighborhood or their road might need paving.

What they may not realize is that the city of Rockland and the downtown district also have concerns for those same issues and we don’t necessarily think we’re getting that kind of attention quicker than anybody else. It all boils down to revenue and available monies from the city to be able to pay for some of those projects.

I do know in talking to city council members and members of the city’s senior staff, everybody has a sincere interest in making the entire community a better community.

WW: What advice would you give to other communities hoping to replicate the success that Rockland has had with its downtown?

Page: Rockland has had the ability over many years to evolve with changes in the economy, changes due to the loss of certain types of industry.

So the arts community certainly has made a difference in downtown Rockland. But it’s not the only reason for the success.

Arts bring people to town, people want to eat, so they eat at the restaurants, they need hotel rooms if they’re coming from out of the area. So we’ve got that well underway. We’ve got a new hotel, we’ve got renovations going on in one of the larger hotels.

And then of course, the shops and boutiques want to be where the people are.

WW: So it’s all those elements—arts, food, lodging, retail…

Page: We could use a broader mix of retail. Diversity in retail is important. While we have very few street level openings, we’re always focusing on what’s the next type of business that we could use in downtown Rockland that could benefit everybody.

WW: What are some of the moves that you’ve made, that you feel good about, that have paid off?

Page: I’m very fortunate to work with a number of very dedicated volunteers. Rockland Main Street Inc. is exclusively volunteer-driven. I’m the only paid staff. The events that we put on—Summer Solstice, the Dock Party, and The Festival of Lights—all are supported by volunteer effort and labor.

I haven’t done anything. I’m fortunate to be in a position to be in a community that is pulling itself forward. And if I can help in some way be the guide for that and help lead until the next [person comes forward], I am fortunate to be in the right place at the right time. I can’t take credit for it, but I want to be the one who is waving the flag and blowing the horn.

WW: Well, you’re certainly visible. We see you up and down Main Street all the time. That sends a message in itself.

Page: I’ve been criticized by some for spending too much time on Main Street, but Main Street is where it’s at. This is the place people want to be.

When people outside the area go on vacation—whether it’s Rockland or Bar Harbor—what draws them is the attractions and the beauty and the vibrancy of the downtown.

And if it wasn’t for downtowns like Rockland, there would be fewer reasons for people to come and stay. 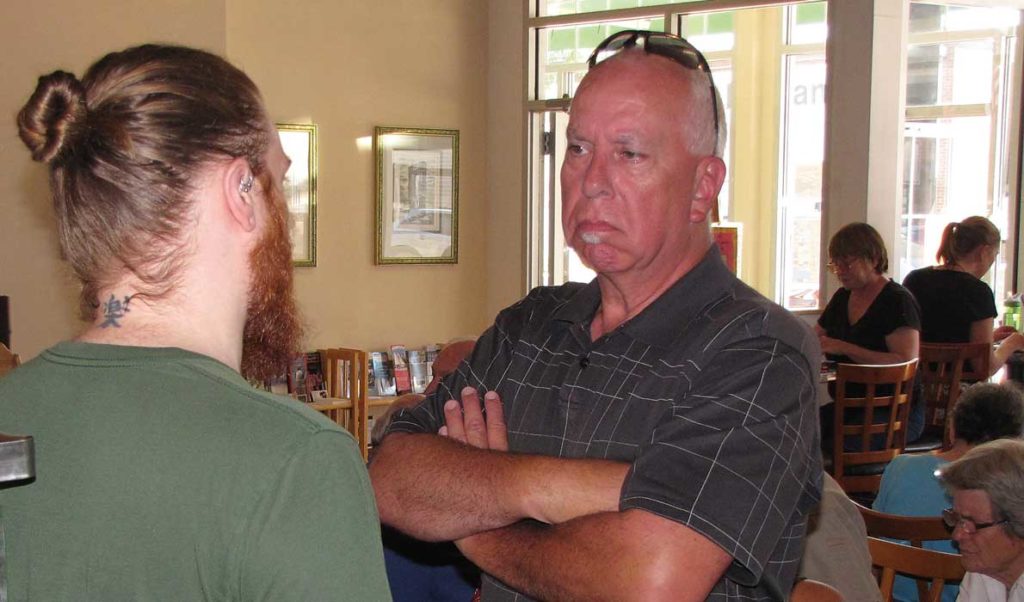 Gordon Page chats with the manager of Rock City Café.