BELFAST, Maine – The Front Street Shipyard has been the biggest thing to happen to the city’s waterfront since the poultry plant was demolished in the late 1990s.

JB Turner, president of the yard, is the most visible of the company’s six partners, and though he bears a prestigious title, Turner would never be confused with an executive: jeans and work shirts, not suits and ties.

Turner, 49, lives in Warren, but grew up in Mystic, Conn. “I used to mow lawns at the Seaport,” he said.

Before joining the launch of Front Street, Turner had been president of Lyman Morse Boatbuilding in Thomaston for 10 years. While there, he remembers, the yard often would get overwhelmed with work, and so he would call Taylor Allen at Rockport Marine and Steve White at Brooklin Boat Yard to share projects.

“Steve and Taylor,” who are related through marriage, “always wanted a bigger yard,” Turner said, because both the Brooklin and Rockport sites are limited to small parcels of land with no room to expand.

“It was all a perfect marriage of the right people at the right time,” Turner said.

Today, just 18 months after opening, Front Street employs 105 with an average hourly wage of $19.58. A major expansion has been proposed, one which would mean the city selling or leasing a parking lot to the business.

Q: So how’s the expansion plans going with the city?

A: The initial blast of meetings to get the project going is done with. Now we’re more focused on the next level of expansion. We’ve just gotten through the process and they’ve approved us for building the piers and the new travel lift.

The travel lift is on order, which is a 485 U.S. ton travel lift – the biggest north of Newport – and will potentially open up a lot doors for us.

That will bring the need for another big building, and that will be our next discussion with the city…

I think we’ve proved ourselves so far. But there’s always a worry about the future and there always will be in any business.

Q: What part of the market do you see providing growth for the expansion?

A: Well, it’s going to be interesting… We don’t know what doors are going to open up with this huge travel lift that we’re going to have. We know the yachts are out there and we’re busy now with what we have. There are other larger projects that now we will be able to go after. What we don’t know is how much work will come in from the commercial side. I’m hoping that it will open doors that we can’t even conceive of right now.

Q: Speaking of that, what does the success of Front Street Shipyard mean for smaller yards, maybe on some of the islands. What do you think that means to them?

A: Well, I hope what it means is that it brings us more people up to Maine. It makes a bigger draw, because we have more capacity now. People, once they get the idea of coming to Maine – there’s good value here, there’s a very good work ethic that doesn’t exist in other places in the country – it just makes it more of an allure, to bring more projects up here.

Q: But you don’t think the small yards will have a hard time competing?

A: They all have their niches. Steve and Taylor, the first question everyone asks [about Front Street Shipyard], is why would you build a yard that’s going to compete with your existing yard? But it doesn’t.

They have their niche markets – very loyal customers, who will always be part of their tradition. And they’re not going to come here [to Front Street].

And there’s plenty of boats south, that if we can draw more up here, we’ll all be busier.

Q: How do you describe your management style. People seem to like you and like working for you.

A: That’s too bad. [Laughs.] I mean, my philosophy is, put the people in the position to let them succeed and a good person will always succeed. And they’ll go well beyond what you were hoping they could achieve.

Q: So, what sort of skills would a young person need to develop if they wanted to come work here, maybe out of high school, voc school…

A: It’s just a desire to work – that’s the biggest thing. You may have a particular area that you want to focus on, welding, or paint work, or carpentry work, or systems work… There’s millions of different things to do here.

If you do have that [desire to work], then we’re totally into training people and bringing them up through the ranks.

We just hired four people this week that are basically initial trainees, and we’re just going to start them down in the very basics, and work their way up through, and hopefully in a couple of years we’ll have four more really good people to work with.

Q: What was your first boat?

A: When I was little, we had two Beetle Cats that I used to go out sailing on when I was like 9- or 10-years-old. The first boat that I actually owned myself was a Laser, and now I have a 40-foot sailboat.

A: Well, I built it. At Lyman-Morse we built a boat that I would consider one of my favorite boats – actually, two of them. One of them was a cruising boat called Windwalker, which was the first boat I was involved in overseeing building. That’s always been a special boat to me. And there was a boat called Baraka, which is a sailboat, that was our first big carbon-fiber project. It’s currently six years old, and it’s sailed 45,000 miles so far. So it’s well-used, well-loved. I’ve always been impressed with that boat.

Q: Can the wealthy boat owners, and crews and captains be difficult to deal with sometimes?

A: I think anybody can be difficult to deal with at some point (laughs). But I think for the most part, we’ve had a really good group of captains and owners. We get along with just about everybody here.

I think they see it in the [shipyard] crew.

People that are wealthy enough to have created what they have in life can quickly see when people are working and when they’re not working, and if they feel they’re getting good value, it becomes a fun thing for them.

It’s all about relationships and trust in this business. I think our yard portrays itself well as being a trustworthy, good, hard-working yard.

Q: What sorts of things do boat crew members like about Belfast?

A: They’re used to going to places like Newport, that are vibrant with a lot of activity going on. And Maine can be not so vibrant in some places. So having the restaurants and the bars and a movie theater, shopping, it’s very artsy up here, and a lot of people love that about Belfast, it gives you a lot of diverse things to do and people enjoy that.

Q: And lastly, what does JB stand for?

A: My friends, when I was growing up, used to call me Jupiter Base (laughs). That’s more of a ’60s thing. But it really stands for John Bass. 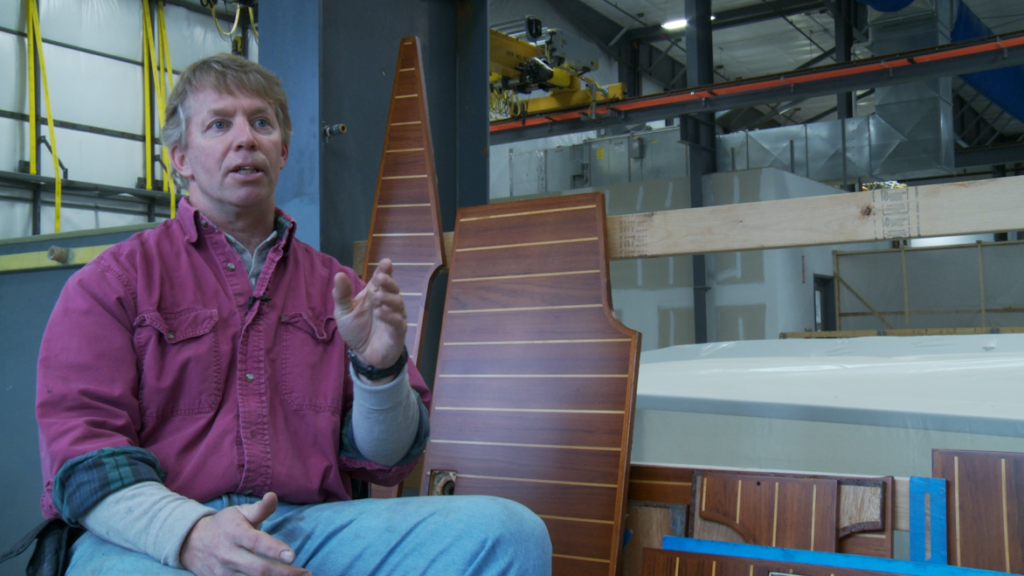