A Massachusetts group aiming to help develop lobster traps that eliminate standing buoy lines recently received a split decision about whether the trap technology could be tested in waters closed to fishing as a protection for endangered North Atlantic right whales.

On April 1, Pioneers for a Thoughtful Coexistence was informed that Massachusetts Division of Marine Fisheries had denied its request to set so-called on-demand traps during a planned closure in state waters to protect the endangered whales. Then, on April 26, federal regulators gave the same group a temporary exemption to test the technology in federal waters that would otherwise be closed to lobstering.

According to a Boston Globe report, the latter authorization represents the first time acoustically signaled on-demand lobster fishing has been allowed in federal waters.

The proposal had been opposed by the Massachusetts Lobstermen’s Association, and many of the state’s lobstermen spoke out against it.

The small group of Massachusetts lobstermen have been working with researchers in recent years to test the new technology, which uses acoustic technology to release a device on a trap to make it accessible on the surface. Proponents of the technology say it will reduce the risk of rope entanglement for North Atlantic right whales, which are in danger of extinction. The group already has been working with this technology in state and federal waters, said Lori Caron, who coordinates work for Pioneers for a Thoughtful Coexistence, and she said it was time to take the next step in testing the technology.

“What we were asking for is just a natural step,” Caron said. “Now it’s time to move it into a real-time environment in a safe and controlled fashion.”

She said the group was surprised by the denial letter written by Massachusetts Division of Marine Fisheries director Daniel J. McKiernan.

In his letter, McKiernan said that while it’s already been proven that on-demand traps could be successfully “deployed, located, and retrieved,” the proposed study was not designed in a way that would “contribute meaningfully to further understanding the efficacy of ropeless fishing technology and addressing the key research questions necessary to determining the commercial viability and broader development of this gear.”

To Michael Moore, a veterinary scientist at the Woods Hole Oceanographic Institution and someone who has been working on the development of on-demand fishing gear, the state’s decision was a reflection of local politics. The proposal had been opposed by the Massachusetts Lobstermen’s Association, and many of the state’s lobstermen spoke out against it during a public hearing in January.

Those fishermen who oppose acoustic on-demand trap technology say it is too costly, might jeopardize the safety of lobstermen, and could create gear conflict. Moore believes the state was bowing to this pressure with its decision.

“To put it bluntly, Massachusetts DMF is answerable to the taxpayers of Massachusetts. Their job is to promote the lobster industry and conserve it,” he said.

Federal regulators took a different view of the proposal and granted three ships a temporary exemption through the end of April to test acoustic release systems in federal waters.

Caron, speaking shortly after the federal decision was released, said that while it was nice to get approval, she was concerned the decision would not leave enough time for her group to fully utilize the exemption. The group was only able to test out the traps on April 30, the very last day of the exemption.

Moore said advocates of acoustic-release technology are continuing to work to make it more effective, affordable, and palatable for lobster fishermen. He said while the federal decision represented a small victory, he believes the best way forward is to win over skeptical lobstermen with the technology.

“We need to pick away at [their concerns],” he said. “The challenge now is to evolve the system to make it [desirable].” 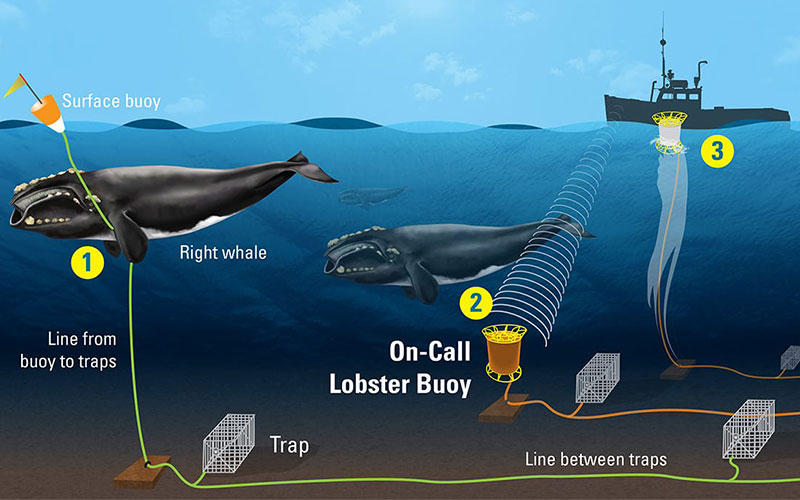